Don’t be fooled by the applause, Binyamin Netanyahu

Previous Next
Don’t be fooled by the applause, Binyamin Netanyahu
When Israeli Prime Minister Benjamin Netanyahu addressed a joint session of Congress on Tuesday, his first audience was the assembly of federal lawmakers and other government dignitaries seated before him. His second audience was President Obama, who was off hobnobbing with the Queen of England, but who, only days earlier, had set out his vision for achieving a resolution to the Israeli-Palestinian conflict. And his third audience was the American Jewish community. People like me. 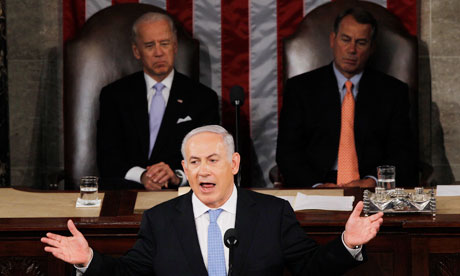 Israel’s PM Binyamin Netanyahu told US Congress: ‘It’s time for President Abbas to stand before his people and say:
I will accept a Jewish state – with those words, I will be prepared to make a far-reaching compromise.’ Photograph: Jason Reed/Reuters

Judging from the extraordinarily warm welcome he received in the Capitol building – by my count, there were 30 standing ovations, including the applause that greeted his entrance and the conclusion of his speech – Netanyahu easily won over the Congress with his passionate defence of Israel as America’s most trusted ally in the convulsive Middle East.

But whether the prime minister’s spirited defence of the status quo and his reluctance to offer a way back to the negotiating table will be received well by the White House is an open question. And that puts American Jews in a difficult, uncomfortable situation.

Jews in the United States do not like finding themselves in the position of choosing between their president and the prime minister of Israel. No matter who is in the White House, no matter who is in charge of the government in Jerusalem, we like to see consensus, a smooth connection, the enunciation not just of shared values, but a shared approach to geopolitical challenges.

In the two years since Netanyahu cobbled together a rightwing coalition in Israel, and came up against an American president scrambling to improve his nation’s image in the Muslim world, that smooth connection got awfully bumpy at times. I fear the impasse is only growing.

It need not be this way. Obama’s speech last Thursday at the state department outlining his administration’s response to the so-called Arab Spring contained a ringing defence of Israel’s continued security and a stinging rebuke to Hamas, the terrorist organisation that rules Gaza and recently signalled an alliance with the Palestinian Authority. Obama plainly defended Israel’s right to exist and its place in the community of nations, pledging to resist attempts to “delegitimise” the homeland of the Jews. And he promised to work against a unilateral declaration of statehood that Palestinian leaders intend to put before the United Nations in September.

But the president also stated out loud what every president (and many Israeli officials) of the last two decades have acknowledged: the borders of Israel before the 1967 war, before the 43-year occupation, are the starting point for negotiations with Palestinians. The starting point, not the conclusion, as Obama also called for “land swaps” that, again, have long been an accepted mechanism for dividing the contested land. And he unequivocally stated that maintaining the status quo was not a wise option in a region that has been shaken to its core by revolutionary stirrings for democracy.

Netanyahu must have known that the stern conditions for peace talks that he enunciated Tuesday were framed in such a way to leave little diplomatic space for the Palestinians. His narrative placed all the blame on them for the current impasse. He pledged that Jerusalem will remain entirely under Israeli sovereignty. He flat out denied that Palestinians have any claim on the land that is now Israel. He vowed to keep a military presence along the Jordan River. And while he promised he’d make “far reaching compromises” in the interests of peace, it’s unclear what that could mean when so much is off the table.

And so, for those American Jews who were hoping that this week’s string of public pronouncements would lead to a breakthrough, Netanyahu’s defiant stance puts us in a heart-wrenching conundrum. We can choose to support his view of the world, in which an aggrieved Israel bears no responsibility for the occupation and for the impasse in negotiations – and many American Jews will. They will side with him and the Republicans in Congress who offered him this unusual platform without, of course, any reciprocal chance to hear another point of view.

But I don’t believe that all or even most American Jews share that position. Most of us want don’t want further procrastination but an end to the conflict, which has stained Israel’s moral standing in the way that occupation and continued violence does to anyone. Most of us dread what will happen in September, if the UN vote is successful and Israel will become even more isolated and demonised.

Most of us, I bet, hoped that Netanyahu would have issued a bold, creative speech that would have moved the process forward, safeguarding Israel’s security as he must, but also recognising the cogent, entirely reasonable requests from the president of the United States.

You are making us choose, Prime Minister Netanyahu. Please don’t.