Christians of the Holy Land

Previous Next
Christians of the Holy Land

By Ben White: Despite claims by Israeli government officials, Christian Palestinians regularly face discrimination. A recent report by CBS show 60 Minutes on "Christians of the Holy Land" has received a lot of attention, not least for the embarrassing contribution by Israeli Ambassador to the US Michael Oren.

It is interesting that Israel (and its advocates) have been so concerned about the impact of a short segment regarding the challenges faced by Christian Palestinians under Israeli military occupation. In fact, Ambassador Oren himself only recently tried to exploit Christians for propaganda purposes – only to find that they objected to his cynicism. 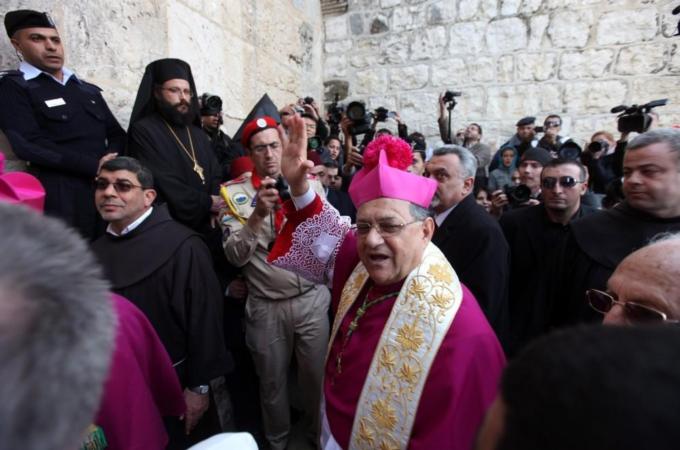 A 2008 survey says 0.8 per cent of Christian Palestinians cited 'fleeing religious extremism' as a reason for emigration

The Israeli government has long tried to suggest that the emigration of Christian Palestinians is the result of a "jihad" being waged by "terrorists" or "fundamentalists". There are obvious advantages to this strategy, particularly its dependence on pre-existing prejudices and stereotypes in the West. But it also seeks to neutralise a potentially damaging threat: that people around the world will see Christian Palestinians leaving their historic homeland due to Israeli colonisation and occupation.

Since 1967, Palestinians living in the West Bank and Gaza have been subject to Israel's military occupation, and on both sides of the Green Line, Christian Palestinians face the same conditions of systematic racial discrimination as Muslims – on the basis that they're not Jews.

Israeli colonisation has fragmented and splintered the traditional Christian heartland of Bethlehem, Ramallah, and Jerusalem – home to around 80 per cent of the Occupied Territories' Christians – through land confiscation, illegal settlements, the Separation Wall, and the regime of travel "permits".

The isolation of Bethlehem has hit Palestinian Christians particularly hard, where unemployment and poverty levels remain high. The illegal Separation Wall takes in approximately 10 per cent of the Bethlehem region, or governorate, including some of the most fertile land. Overall, through a combination of Israeli policies (including 19 illegal Jewish settlements), the UN estimates that only 13 per cent of the Bethlehem region is available for Palestinian use.

Unsurprisingly, these are conditions that make young people despair about the future. In fact, a number of studies show clearly the reasons why Christian Palestinians emigrate. It's not what Michael Oren or Christians United For Israel would have you believe.

As far back as 1993, 88 per cent of Christian Palestinians surveyed about emigration specified the economic situation. In a 2006 survey, 78 per cent of Christian respondents to a Bethlehem-based poll said "Israeli aggression and occupation are the main cause of emigration", while only 3.1 per cent exclusively blamed the "rise of Islamic movements" (12.1 per cent said it was a combination of the two). More than half of those Christians surveyed had at least one relative whose land had been confiscated by Israel.

Another, more wide-ranging survey in 2006 found that roughly 7 out of 10 Christians cited either political conditions or employment as the reason for emigration. Only 8 per cent cited religious fanaticism. When asked to name the challenges confronting Christians in the Holy Land, just under half of respondents chose job opportunities and housing (11 per cent chose religious fanaticism).

Finally, in a 2008 survey on reasons for emigration, 1 in 3 cited "lack of freedom and security", 1 in 4 said "deterioration of economy" – and only 0.8 per cent chose "fleeing religious extremism".

That economics and occupation are at the heart of Christian emigration trends is no surprise. As the World Bank regularly points out, Israeli restrictions on the free movement of people and goods (for Palestinians) is a key reason for economic weakness in the Occupied Territories.

This is what pro-Israel advocacy groups try to hide, preferring decontextualised, cherry-picked anecdotes or wild, unsubstantiated claims. But the consistent message of these surveys is the same as that expressed by the recent EU Heads of Mission Report on East Jerusalem:

"Church leaders cite as reasons for increased emigration: GoI [Government of Israel] imposed family-reunification restrictions, the limited ability of Christian communities in the Jerusalem area to expand due to confiscation of church properties and building restrictions, taxation problems and difficulties in obtaining residency permits for Christian clergy."

This is not to deny the existence of sectarian tensions in Palestinian society, and the tiny size of the Palestinian minority only heightens the sense of vulnerability. Muslim-Christian relations, and particularly the sense of concern felt by some Christians, have been shaped by a variety of factors, many of which originate in the facts of Israeli colonisation.

So for example, when looking at the demographics of a small city like Bethlehem, change over the decades has been caused by the influx of refugees, as well as rural-urban migration (both mainly Muslim). Israeli policies are the root cause – whether through direct expulsions of Palestinians, or through land confiscations and other policies which have made village life so difficult.

A scarcity of land and resources coupled with the legal anarchy that comes from having no real government, means that in the Occupied Territories, weaker groups are vulnerable to exploitation by corrupt individuals. In addition, a recent lamentable development has been the increased strength of socio-political groups that promote an exclusionary and fanatical form of "Islam".

Naturally then, Christian Palestinians see their main problem as coming from ongoing colonialism and occupation, while also acknowledging the threat posed by a minority of religious extremists. Apparently, however, this position is a bit too complex for Israel advocates to grasp.

There is a key distinction between individual bigotry and the kind of coordinated, systematic racial discrimination – or apartheid – as practised by the Israeli state for decades, which affects Muslim and Christian Palestinians alike.

When Israel's Housing Minister calls it "a national duty to prevent the spread" of Palestinian citizens in the Galilee – he is not distinguishing between Christian and Muslim. Nor was Ehud Olmert, former-PM then mayor of Jerusalem, when he said it is "a matter of concern when the non-Jewish population rises a lot faster than the Jewish population".

What Human Rights Watch has described as Israel's "two-tier system" where Palestinians face "systematic discrimination merely because of their race, ethnicity and national origin" affects everyone, Christian and Muslim. Sadly, no wonder some choose to leave

Many, however, have chosen to stay, and they, like so many other civil society groups, are calling on people around the world – including churches – to stand up and be counted: to use time-honoured strategies of boycott and divestment to ensure that Palestine/Israel is a place where your rights – and even your ability to be there at all – are not determined by religion and ethnicity.