Bishop Tawadros has been chosen as the new pope of Egypt’s Coptic Christians, becoming leader of the largest Christian minority in the Middle East.

His name was selected from a glass bowl by a blindfolded boy at a ceremony in Cairo’s St Mark’s Cathedral. Three candidates had been shortlisted.

He succeeds as attacks on Copts are on the increase, and many say they fear the country’s new Islamist leaders. Bishop Tawadros has studied in Britain

The other two candidates were Bishop Raphael and Father Raphael Ava Mina. They were chosen in a ballot by a council of some 2,400 Church and community officials in October.

Their names were written on pieces of paper and put in crystal balls sealed with wax on the church altar.

A blindfolded boy – one of 12 shortlisted children – then drew out the name of Bishop Tawadros, who until now was an aide to the acting leader, Bishop Pachomius.

Bishop Pachomius then took the ballot from the boy’s hand and showed it to all those gathered in the cathedral.

The hand of God 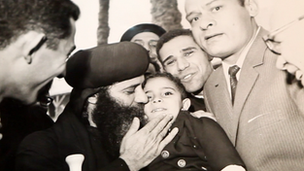 We got an invitation to the ceremony to choose the new pope. But when my father and I got to the cathedral, the crowd was so big, we could not get inside. There were more people outside than in.

We were with the crowd outside, waiting to find out the name of the new pope, when a group of deacons came out to look for children. Ten of us went inside. I remember the acting pope was wearing a blindfold so he could not see us. Then he put his hand on my head.

When I was born my grandfather, who was a priest, told my mother he had dreamt I would be the person to choose the new pope, and that the pope would be called Shenouda III.

Strict measures were in place to make sure there was no foul play during the televised ceremony: the three pieces of paper with candidates’ names were all the same size and tied the same way.

Copts say this process ensures the selection is in God’s hands.

Bishop Tawadros will be enthroned in a ceremony on 18 November.

The new pope has studied in Britain, and has also run a medicine factory, the BBC’s Jon Leyne in Cairo reports.

He is a man of broad experience and with managerial skills, our correspondent says, adding that he will need all those talents to lead the Copts as they face an uncertain future in a country now debating the role of Islam following last year’s revolution.

Our correspondent says no-one in Egypt expects the new pope to introduce radical changes to the deeply conservative church.

Pope Shenouda died in March. Under his leadership, the Coptic Church expanded significantly, including outside its traditional Egyptian base.

He was a passionate advocate of unity among the Christian churches, and also clashed with then President Anwar Sadat, particularly over their conflicting views on the future of Egypt’s relationship with Israel.

Coptic Christians have long complained of discrimination by the Egyptian state and the country’s Muslim majority.

But when President Hosni Mubarak was ousted last year and succeeded by the Muslim Brotherhood, their fears grew.

In October 2011, 25 people died in clashes with the security forces after a protest march in Cairo over the burning of a church.