VATICAN CITY – On June 4 – 5,  2013, the Bilateral Permanent Working Commission between the Holy See and the State of Israel had a meeting to continue negotiations on economic and fiscal matters of the Catholic Church in the Holy Land. Here below is the joint communiqué of the Commission.

The Bilateral Permanent Working Commission between the State of Israel and the Holy See met today, 5 June 2013, at the Vatican, at the Plenary level to continue negotiations pursuant to the Fundamental Agreement Art. 10 paragraph 2.

The meeting was headed by Msgr. Antoine Camilleri, Under-Secretary for the Holy See’s Relations with States and by Mr. Zeev Elkin, M.K., Deputy Minister of Foreign Affairs of the State of Israel.

The Commission welcomed the two new heads of the delegations, and acknowledged the contribution of Ambassador Bahij Mansour to the negotiations and wished him success in his new position.

The negotiations took place in a thoughtful and constructive atmosphere. The Commission took notice that significant progress was made and the parties committed themselves to accelerate negotiations on the remaining issues, and look forward to an expedited conclusion in the near term.

The Parties have agreed on future steps and to hold the next Plenary meeting by December 2013 in Jerusalem. 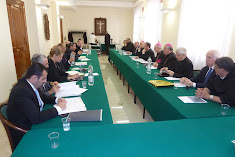 Delegation of the Holy See:

Msgr. Maurizio Malvestiti, Under-Secretary of the Congregation for Oriental Churches

Msgr. Alberto Ortega Martín, Official of the Secretariat of State

Delegation of the State of Israel:

Mr. Zion Evrony, Ambassador of the State of Israel to the Holy See

By: Latin Patriarch of Jerusalem