ELCJHL Dedicates Church at Bethany Beyond the Jordan

Previous Next
ELCJHL Dedicates Church at Bethany Beyond the Jordan

On January 6th, 2014, over 200 clergy, royalty, and guests joined the ELCJHL in dedicating the Evangelical Lutheran Church at Bethany-Beyond-the-Jordan under the patronage of King Abdullah II ibn al-Hussein, located at the spot where John the Baptist baptized Jesus in the Jordan River.

The Evangelical Lutheran Church in Jordan and the Holy Land was given 5 dunums of land at the Baptismal Site by His Majesty King Abdullah of the Hashemite Kingdom of Jordan in 2008, making the ELCJHL one of seven churches to receive land with the hopes that each of the local churches would create a church home and center of their own at the site so that they can invite their churches worldwide to use the site for pilgrimage and baptism. The groundbreaking of the church was on January 6, 2012 with Mr. Nabil Zaki Goussous, Principal Architect at Rukn Al Buna Architects, and Mr. Sani Kassabreh, the Principal Contractor, both serving on the project. 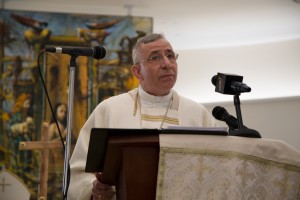 Bishop Munib Younan gives the sermon in both Arabic and English at the Evangelical Lutheran Church in Bethany-Beyond-the-Jordan. (© Danae Hudson/ELCJHL)

When asked about the number of people from around the world who attended, Bishop Younan said: “It is very important to connect with our local and international partners. There is no church that can live on its own, we are all interdependent and that was seen through this project.”

Bishop Younan spoke of how the vision for this church is more than just a pilgrimage site, but also as a way of sharing the plight of Middle East churches with those who come to visit the church. “Churches in the Middle East are destroyed, attacked, but in Jordan, we received permission to build our church. This shows that there is freedom of religion and that Christians are considered equal citizens. When pilgrims come, they need to know that Jordan and Palestine protect freedom of religion for Christians.”

[church] shows, in a concrete way, a way to help Christians in the Middle East by connecting pilgrims all over the world with us here, in Jerusalem, and in Bethlehem.” 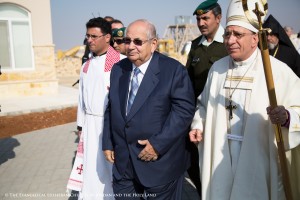 Prince Raed bin Zeid of the Hashemite Kingdom of Jordan honored the service with his presence and came as the representative of His Majesty King Abdullah II. Jordanian Minister Nidal Katamin, Minister of Tourism and Antiquities represented the government of Jordan at the ceremony. Guests included Senators, Parliamentarians, and Ministers from the Kingdom of Jordan; International Grand Commander of OSMTH Col. Dr. Marcel de Picciotto; General Patrick Rea, the Grand Master of OSMTH, as well as a number of Grand Priors from around the world; Princess Elizabeth of Germany; the Duke of Mecklenberg; as well as many religious authorities and Bishops from Jordan, the congregation of the Evangelical Lutheran Church of the Good Shepherd in Amman, as well as guests from 17 countries around the world.

“It was a gorgeous celebration and even the palace was present, the minister was present, Muslims and Christians alike. That is very significant for all of us,” said Bishop Younan. Minister Nidal Katamin spoke on behalf of His Majesty King Abdullah of the Hashemite Kingdom of Jordan on the importance of the church at the Baptismal Site.

Music and art were a large part of the dedication. The Talitha Kumi Scouts, associated with the Evangelical Lutheran Church of the Reformation in Beit Jala, were brought to perform before and after the service. Special music during the ceremony was provided by the Trondheim Quartet. 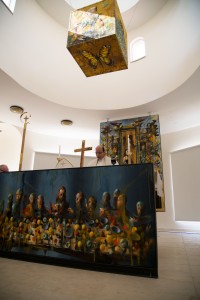 Artwork was installed the day before by artist Håkon Gullvåg. Mr. Gullvåg has supported the ELCJHL in a number of endeavors over the years, including art exhibitions in Jerusalem. The installation consists of paintings of the Last Supper, Jesus’ Baptism, and a cube suspended over the altar that includes paintings of Jesus as the Lamb of God.

Rev. Rolf Pearson and his wife, Deacon Kerstin Pearson, seconded by the Church of Sweden, were installed as the caregivers of the site. Over the coming months, they hope to develop a pilgrimage site for those wishing to visit.

Rev. Pearson gave a brief interview before the dedication where he outlined what he hoped the pilgrimage center would be: “We are going to develop worship, including worship surrounding both baptism and baptismal renewal. We are hoping that pilgrims will find a place where they can be renewed spiritually, a place to understand the religious, social and political context of the place where they are, and to see the Church presence in the Middle East.”

Now that the church has been dedicated, Bishop Younan wishes to encourage churches around the world to include the Baptismal Site in Jordan as part of their pilgrimage: “I ask that churches around the world to partner with us – between places that want to come on pilgrimage. To start, on their pilgrimage with the Baptismal Site and to then visit Jerusalem and Bethlehem to be with us. This will be a blessing to us and all of us will benefit, not only the locals. For me, pilgrimage is reviving your faith when you visit and reviving the faith of others. We want every pilgrims to use this place for choirs, concerts, worship, baptisms, weddings. This church is a church for all people, for the glory of God.”

By: The Evangelical Lutheran Church in Jordan & the Holy Land