On March 11 and 12, 2014, the Assembly of Catholic Ordinaries in the Holy Land convened in the Casa Nova Guesthouse in Tiberias for the first of its bi-annual meetings of 2014. The members of the Assembly were warmly welcomed and taken care of by the members of the Koinonia John the Baptist community that runs the church and guesthouse. As always, the proceedings began with a time for prayer, the greeting of the President of the Assembly, Latin Patriarch Fouad Twal and a round of news from the various participants. In his opening remarks, Patriarch Twal thanked newly emeritus Greek Catholic Archbishop of Galilee Elias Chacour for his contribution to the Assembly and expressed full support for the Administrator of the Greek Catholic diocese of Galilee, Maronite Archbishop Moussa al-Hage.

Among the important issues discussed in depth by the members of the Assembly were:

– The upcoming pilgrimage of Pope Francis to the Holy Land, on May 24 to 26, 2014. Among the decisions taken by the Assembly was the fixing of the motto and logo of the visit. Each of the various commissions gave a report about the preparation that is taking place.

– Latin Archbishop Maroun Lahham from Amman presented a summary of the responses from the various Catholic dioceses to the questions that had been distributed from the Vatican with regard to the upcoming Synod on the Family.

– Emeritus Latin Patriarch Michel Sabbah presented two texts of the Justice and Peace Commission dealing with the present situation: one on the trend in the Israeli administration to try to separate the Christians from the general Palestinian Arab population and the other on the situation of the Christians in the Arab world.

The Assembly also provided an occasion to meet with a man and wife from the Messianic Jewish community in Israel and learn more about the life of this community of believers in Jesus Christ. On the evening of March 11, the Assembly invited all the Catholic religious communities and groups around the Sea of Galilee to a celebration of the Holy Mass, presided by Latin Patriarch Twal. The mass was animated by the seminarians from Neo-Catechumenal Redemptoris Mater Seminary in Korazin, above the Sea of Galilee.

On March 12, the second day of the Assembly, the time was consecrated to prayer and reflection. The participants made their way to the archaeological site of Magdala, north of Tiberias and on the Sea. They were welcomed by the community that takes care of the site, the Legionnaires of Christ. There Father Hans Putman SJ directed a time for meditation and personal prayer. Holy Mass was celebrated in the new church at the site by Archbishop Giuseppe Lazzarotto, Nuncio in Israel and Cyprus and Apostolic Delegate in Palestine.

The Assembly reconvened after lunch. Father Maroun Abi Nader, the new chaplain to the Lebanese Maronite community in north Israel presented the reality of this community made up of about 650 families that fled Lebanon about 15 years ago. Other points that were discussed regarded the canonization of Blessed Popes John XXIII and John Paul II and the Holy Land Coordination.

The Assembly will convene again in September 2014. 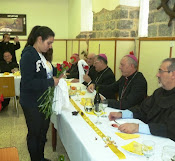 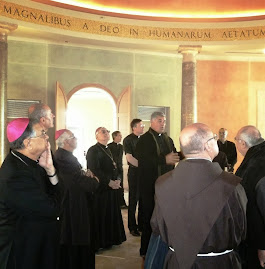