Holy Land Participates in Conference on Eastern Christians in Lyon

FRANCE – From March 26-29 at the Catholic University of Lyon an international conference on “The Vocation of the Christian East: current and future challenges in its relationship to Islam.” Organized by the Theology Faculty of the CUL. The Holy Land was represented by Bishop Giacinto Boulos Marcuzzo, Latin Patriarchal Vicar for Israel, and Bishop Lahham Maroum, Latin Patriarchal Vicar for Jordan, for the three days of reflection and sharing.

The conference was organized by the Faculty of Theology of UCL, including the President, Fr. Thierry Magnin, the Dean, Fr. Bertrand Pinçon, and Prof.Michel Younes, Professor of Theology East. The opening the conference, attended by about 400 people, was honored by the presence of three esteemed personages: His Beatitude, Raphael Louis Sako I, Patriarch of the Chaldean Church, His Eminence, Card. Philippe Barbarin, Archbishop of Lyon and Chancellor of the CUL and His Excellency, Archbishop Cyril Vasil, Secretary of the Congregation for Oriental Churches.

Each day had three very distinct phases: a plenary session each morning where four experts presented papers on the theme of the day; 7 or 8 workshops (about a dozen people each) in the afternoon, a roundtable discussion later in the afternoon where four specialists, after a brief presentation, generously answered questions from participants. The themes of the three days were:

1) “The Geopolitical Approach: changes in the last 30 years”;

2) “The Diaspora or Expansion Approach: Eastern Christians outside their historical territory”;

3) “The Church Approach: the diversity of churches, strength or weakness?” About thirty specialists from the East and various Western countries, especially France, Canada, USA and Germany, brilliantly enlivened this conference.

The Holy Land was represented by Bishop Giacinto Boulos Marcuzzo, Latin Patriarchal Vicar for Israel, who led a plenary session, 4 workshops and a roundtable discussion on the issues concerning Israel-Palestine, and Bishop Lahham Maroum, Latin Patriarchal Vicar for Jordan, who moderated a plenary session, two workshops and two panel discussions on issues relating to Jordan. Knights of the Order of the Holy Sepulchre also played a popular role in this conference and many of them faithfully attended throughout the course of the conference. The former lieutenant, Gen. Bernard Fleuriot, led an interesting workshop on the activities of the Order in the Holy Land. Some Knights have made a contribution of volunteers in the organization of the conference, and others hosted speakers in their homes. This was the case with Bishop G. B. Marcuzzo, hosted by Richard Guy and Beatrice, and whose home is not far from the University. Sr. Monika Dullman, Director of St. Louis Hospital in Jerusalem, was also invited to speak mostly on charities working in the Holy Land.

Besides the EOHSJ, L’Oeuvre d’Orient was effectively present, including its Director, Fr. Pascal Gollnisch, one of the speakers who prepared, at the beginning of the Symposium, a long and beautiful series of illustrative panels on Oriental Churches called “the Great Adventure of Eastern Christians”. At the bookshop, we observed the book-interview of Patriarch Michel Sabbah: “Pray for the peace of Jerusalem” and that of Father Manuel Mussallam, “The priest of Gaza.”

A non-academic activity, but still relating to the East, enlivened each evening: a concert of songs performed by many Chaldeans, Maronites and Armenians of Lyon at the Paul Couturier Centre, overseen by Chemin Neuf Community. A solemn Mass was celebrated by Patriarch Raphael Louis Sako I, and concelebrated by Cardinal Barbarin, some bishops and many Eastern and local priests in the Cathedral St. John. There followed a fraternal dinner hosted by the Archbishop of Lyon for the bishops, the organizers of the UCL conference, at his house, next to the Basilica of Notre-Dame de Fourvière.

Supported by impeccable organization, enriched by the valuable contribution of totally respected specialists, and encouraged by the lively interaction of the participants, the conference was a great success and a beautiful sign of attention given by the Church of Lyon to the Christian East. A sign of hope and good seeds for the future.

For Bishop Lahham and Bishop Marcuzzo, it was a joyous occasion to meet acquaintances of old from the Holy Land: the Emmanuel Community; Fr. Maurice Borrmans and Fr. Philippe Thierry of the White Fathers; the Chemin Neuf Community; the family of the permanent Deacon Marc Hodara; and Fr. François Lestang. 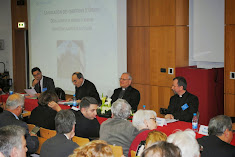 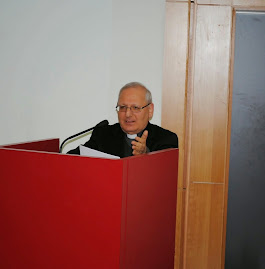 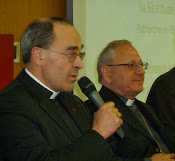 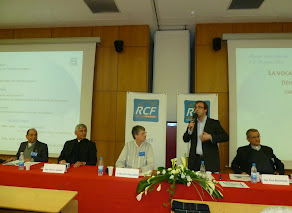 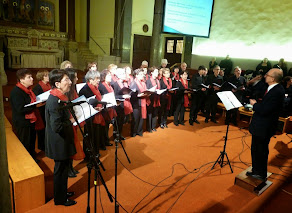 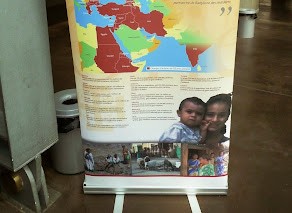 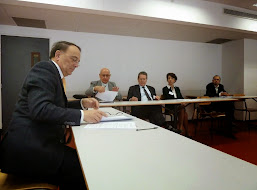 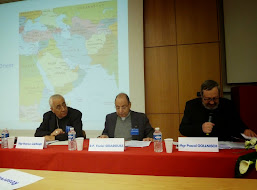 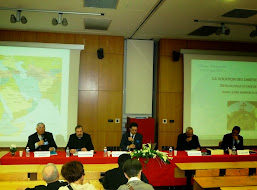 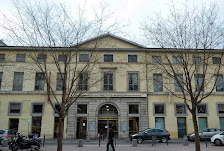 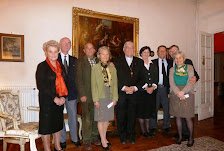