ROME – At its annual meeting on June 10, 2014 in Rome, the Italian Association of Craftsmen, CONFARTIGIANATO, awarded the Latin Patriarch of Jerusalem, Fouad Twal, its “Janus” prize – in Roman mythology Janus was the god of peace.

The prize, intended to symbolize the strength that animates the artisans and reward their good works, was presented to His Beatitude for his testimony to peace and goodness.

For several years the Italian association Confartigianato has worked with the Latin Patriarchate and accompanies the Mother Church in facing its greatest challenges: the training of young people and future generations.

A collaboration born with its President Guerrini continues with President Merletti and Secretary General Fumagalli who, yesterday, welcomed the Patriarch with great affection and friendship.

The cooking school in Ramallah with the Mediterranean restaurant, the Printing Press of Beit Jala, the laboratories of the University of Madaba, are some of the projects implemented and funded by ANCOS for which the Patriarch thanked the Assembly, and called for this beautiful friendship to continue growing still more so that everyone becomes “peacemaker”! 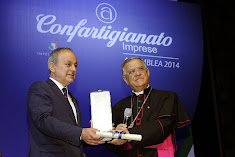