Meeting with a Delegation of United States Catholic Bishops: “We Cannot Keep Silent!”

Previous Next
Meeting with a Delegation of United States Catholic Bishops: “We Cannot Keep Silent!”

JERUSALEM – On Friday, September 12, 2014, a delegation of twenty bishops from the United States on a pilgrimage in the footsteps of Pope Francis to promote peace, accompanied by members of CRS (Catholic Relief Services), gathered with His Beatitude Fouad Twal the Latin Patriarchate. The countless challenges of the Christian community in the Holy Land were discussed, and the Patriarch and various speakers called for prayer and support of the Mother Church in its most concrete needs.

It is a pilgrimage in the footsteps of Pope Francis who came in May to the Mother Church of Jerusalem and the Middle East to better understand its suffering and its challenges, and thus be able to unite in the cause of Christians in difficulties. This, too, is the objective of the visit of a delegation of the Conference of Catholic Bishops of the United States (USCCB).

At the beginning of the meeting, Patriarch Fouad warmly expressed his gratitude “on behalf ofthe whole Christian community, not just Catholic, of the Holy Land” for the delegation’s attention and support of the mission of the local Church. From the outset, the Patriarch stressed: “I believe that all bishops are invited to feel co-responsible for the Christian community in this region, the cradle of Christianity”. He then recalled the twin dimensions that mark the Jerusalem Church: the Church of the Resurrection, and also the Church of the Calvary, the Cross. It must stand in the middle of political issues, in face the emigration of faithful abroad, and face challenges such as welcoming more than one million Syrian refugees in the diocese in Jordan. He continued, “We accept our cross. Calvary is not far from the empty Tomb. We never cease to hope and to work for peace for all.”

The Patriarch thanked the American bishops for this “solidarity visit”, reminiscent of Pope Francis’ visit, primarily a spiritual pilgrimage, that was also a witness to this same solidarity, and one where the political dimension could not be ruled out. His meetings with Syrian refugees on the banks of the Jordan and with the children of the Dheisheh camp in Bethlehem were two very high points of his journey. “We count on your prayers, your solidarity, your advocacy and your ability to join your voice with ours to speak with courage; the courage to tell the truth. We cannot keep silent! We are absolutely against any form of violence. And we want peace for all: for Jews, Muslims, and Christians.”

The director of schools, Father Faysal Hijazen, then spoke and stressed the importance of education for the formation of a new generation of peace, recalling the words of Pope Francis in Bethlehem: “The Child is the sign Peace.” The director of the school in Beit Jala presented all the challenges faced by schools in the Holy Land, which have worked in the region for over 160 years, and currently devoted to the education of over 17,000 students spread over 45 schools. Schools are indeed the essential breeding ground for transmission of the faith, of universal Christian values, and teaching mutual respect and coexistence between different faiths welcomed on equal terms. They also help to preserve the identity and the Christian presence in this troubled region of the world. In the very long list of challenges that schools must face, there are two priorities: social security for teachers, as yet non-existent, and the restoration of schools in Gaza. Faced with these challenges, Father Faysal suggested to American bishops that each diocese of their country could adopt a school in our country.

Fr. Raed Abusahlia, general director of Caritas Jerusalem, also presented the needs of the people of the Holy Land, specifying concrete and current needs of the Gaza Strip. After intensive emergency interventions during the war, now it is necessary to face a long process of rebuilding and continue to meet the immediate needs of the displaced and homeless. Father Raed highlighted how Caritas works for peace and coexistence. At a recent initiative called “Footballs not bombs”, the organization distributed more than 7,000 soccer balls to the children of Gaza. And in response to 4564 rockets sent by Hamas, 4564 balloons were sent to children in southern Israel. “This is a very symbolic message. On both sides, children have suffered. These children should play” said Fr. Raed while stressing how, during the war, he was touched by the solidarity of many Israeli associations for peace and individuals who provided assistance and expressed their support for the people of Gaza. The director of Caritas Jerusalem concluded by suggesting to the delegation, like the Fr. Faysal, that the various dioceses of the United States sponsor activities and projects of Caritas.

and Caritas for their valuable support during the war. Father Jorge explained the urgency of finding a political and not only an economic solution for Gaza. “We need a solution to the Gaza blockade, otherwise we are going to just rebuild before the next war.” Many Christians choose to leave, and the number of Christians in Gaza continues to decline, recounted Father Jorge. A humanitarian emergency that will only become more acute with the approach of winter is the insufficient number of tents to shelter the displaced, coupled with serious injuries and psychological trauma suffered: “a six year old child in Gaza has already experienced three wars” lamented Father Jorge, launching an urgent call to prayer.

Then, Bishop Shomali, Patriarchal Vicar for Jerusalem and Palestine referred to the two main demands made ​​by Pope Francis during his visit to the Israeli government: a solution for thereunification of families divided by the wall of separation, and the facilitation of clergymovements between Israel and Palestine.

The Patriarch concluded the meeting by reminding that “Peace will never happen by building walls,” and he encouraged the American bishops to advocate loudly the causeof a just peace in the country.

The meeting was then followed by a Mass at the Co-Cathedral of the Patriarchate, after which all were invited to lunch. 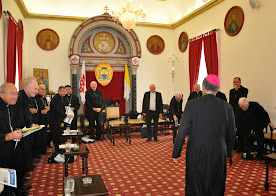 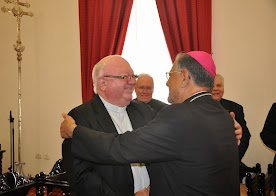 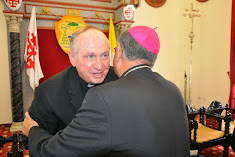 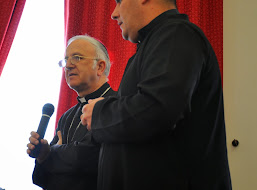 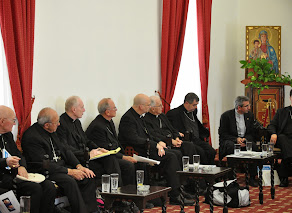