Last September, Middle East Christians were thrust into a spotlight they have long deserved when U.S. Senator Ted Cruz told a questionable Washington D.C. group ostensibly organized to “defend them” that if they didn’t support Israel then they weren’t really Christians at all.

It was a shocking and hateful comment from an American politician who was clearly positioning himself to earn financial campaign support from Israel’s powerful lobby.

But Cruz inadvertently sparked a badly needed debate that fueled enthusiasm for another conference this week hosted by the Holy Land Christian Ecumenical Foundation (HCEF) that put a genuine spotlight on the needs of Middle East Christians who are struggling for their very survival.

Several prominent speakers to address the 16th Annual HCEF convention at the Marriott Washington hotel included Hanan Ashrawi, the powerful Palestinian orator who during her 30 minute remarks sliced and diced Israeli propaganda and detailed the methodology of Israel’s genocide and ethnic cleansing of not only Christian Palestinians but all non-Jews.

Ashrawi, a Christian Palestinian and spokesperson for the Palestine Liberation Organization (PLO), detailed how Israel was “besieging Palestinians separated by the horrible Apartheid Wall.”

“This wall not only besieges Gaza and Jerusalem but is also separates Palestinians from other Palestinians. It is not a wall between Palestine and Israelis. It is mainly on Palestinian territory and it steals our horizon. It steals our ability to see the sunlight. And there is nothing worse than stealing people’s horizon,” Ashrawi said. 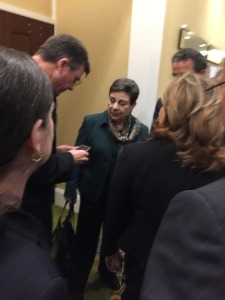 Ashrawi greeted by attendees after her speech

“I keep telling Israelis that when you build this horrible wall, it is not just a wall of separation and annexation, you are also imprisoning yourself behind this wall. And Walls have been a failed policy. From the Great Wall of China, to Hadrian’s Wall and the Berlin Wall, this wall will collapse as well.”

Ashrawi, who lives under Israeli military occupation in Ramallah, just north of occupied Jerusalem in the West Bank, said that Israel was engaged in a deliberate policy to cleanse Palestine not only of all non-Jews but also Christian Arabs.

“But what is even more destructive is the deliberate Israeli policy of ethnic cleansing in Area C and in Jerusalem. Israelis get very upset when we use terms like Ethnic Cleansing or like Genocide or like War Crimes or Massacres,” Ashrawi said.

Israel has imposed draconian laws that violate International Laws to confiscate and revoke Palestinian citizenship in Jerusalem to empty out the city of Muslim and Christian Palestinians.

“More than 15,000 Palestinian IDs have been revoked, confiscated from Jerusalem. They say you are not even a citizen. When Israel occupied Jerusalem, they turned everyone into temporary residents,” Ashrawi said.

Ashrawi also evoked laughter when she offered personal insight into what she described as the Israeli effort to replace the historic existence of Palestinian Christians and Muslims in the Holy Land with their own recently fabricated existence. 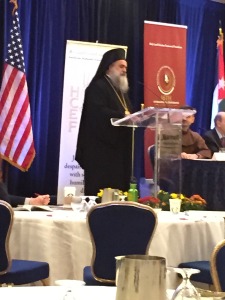 “The displacement and replacement paradigm is taking place. They even steal the names. If you have seen settlements built next to Palestinian villages and towns. You notice the naming of the settlements is very close to the Arabic names. There is a competition over the history as though they were there before us, or even they were there along with us. Even the naming is a tool,” Ashrawi explained.

“Even the theft of our cuisine. That’s something that drives me nuts. I am sure it drives you nuts, too. When you read about Israeli falafel. Israeli hummos. Israeli tabouleh. And recently, I was reading about the latest Israeli health food, Freekah. You confiscated our lands. Now you confiscate our culture including our cuisine, our food, historically.

“They are taking over the Palestinian reality to digest it and to turn it over into an Israeli reality. And to compete over legitimacy and historical discourse and historical narrative. They started with a myth, the land without a people for a people without a land, and they are continuing this myth by manufacturing all sorts of ideologies.”
HCEF is headed by Palestinian Christian Sir Rateb Rabie and the group defines its ission as being “committed to the continued presence, empowerment, and well-being of Arab Christians in the Holy Land and to developing the bonds of solidarity between them and Christians elsewhere.”

The HCEF website is www.HCEF.org. The entire program is available online by clicking here.

(Ray Hanania is an award winning former Chicago City Hall reporter and political columnist. A Christian Palestinian activist, Hanania is President/CEO of Urban Strategies Group media consulting and is the managing editor of the Arab Daily News. He was also a presenter and moderator at the conference on a panel addressing the future of Palestinian-Israeli peace.)