Palestinian American businessman Farouk Shami, who has used his entrepreneurial success and his high public profile activism to strengthen a more positive image of Palestinians, urged the attendees at the 16th Annual Convention of the Holy Land Christian Ecumenical Foundation to build a Palestinian State by directly investing in Palestine.

Shami, who was among several dozen speakers who advocated a stronger voice for Arab Christians and especially Christians from the Holy Land including Hanan Ashrawi and Jerusalem Archbishop Atallah Hanna, said that he has spent his life using his profile to educate Americans through example including when he ran for governor of Texas in 2010.

Shami said that he continues to argue with Israelis that if they do not make peace soon, they will face a perilous future with the rise of extremism both in Israel and in the Arab World. He said he supports the establishment of a Federal System in which Israel and Palestine would exist together individually, but also a Federal Government similar to the American government in “an open and free Jerusalem.”

“The land is for everybody and all the Abrahamic people. It is not for the Russians who are coming and getting passports and citizenships while we Palestinians are denied to go there. I think there is enough land there is enough room for all of us to live there in peace and harmony,” Shami said to applause.

“If we could have two states with a federal government and Jerusalem would be three capitols, Palestinian, Israelis and the Federal Government, we could have one army made of Jews and Palestinians so there would be no room for them to say security, security, security. Is Israel, with 300 nuclear weapons afraid of children with stones? This is an excuse to take our land and our property and we are really tired of that. Let’s implement the United States of America as our example. … We have a government and we are a part of that government.”

Shami has engaged in supporting and sponsoring high profile events including as the principle sponsor of the popular annual Miss USA Beauty Pageant. Although many Arabs, especially more religious conservatives, frown on beauty pageants, Shami recognized the event as being a major part of American society and participates to show Americans that “Palestinians are no different than they are.” 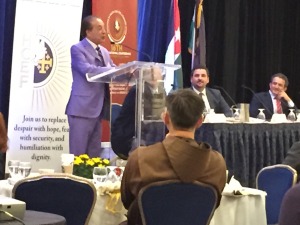 Shami has worked for decades in the field of hair-care product development, and attended cosmetology school in Arkansas. He invented the first ammonia- free hair color, after developing an allergy to the chemical that initially led doctors to encourage him to leave his profession. His company, the Houston-based Farouk Systems, currently employs 2,000 people, and exports its line of hair and skin care products under the BioSilk, SunGlitz and Cationic Hydration Interlink (CHI) brands to over 106 countries worldwide.

Shami told the more than 230 attendees of the HCEF convention at the Marriott Hotel in Washington D.C. Saturday October 18, 2014 that he believed that rising religious extremism jeopardizes Israelis existence and that the only way to save Israel is to make peace with the Palestinians.

“I tell the Israelis, the window of peace is closing. It is closing very soon. Either you accept peace and you give the Palestinians the rights to their lands, and everyone has a right to their land. You have the title, it is your land. Either you pay for it or you get out of it. This is the choice,” Shami said.

Shami said that Palestinians must engage and participate in American society and culture and not simply cast judgments.

But Shami said that despite his love and devotion to his adopted homeland, America, he said that the United States could not be an effective or fair arbiter of Middle East peace.

“Yes, we live in the United States of America and yes we live outside of Palestine. But our hearts and our minds are with the Palestinian people because injustice is made in Palestine for the people who have the justice and right to live in Palestine.

Shami said that peace can be built on economic prosperity for both peoples, noting that currently Israeli policies undermine the Palestinian economy and feed the conflict.

“Palestine needs to build an independent economy … we can’t keep stretching out hands to donated countries. God bless them for what they have done. But we need to help ourselves. We need to get 1,000 business people together and ask them to invest 10 percent of their business in Palestine. To hire Palestinians,” he said noting that he has been trying to launch a new business in Palestine for his successful national hair products company, Farouk Systems. Shami said that Israeli policy has stymied his efforts as they stymie the efforts of Palestinians to achieve peace.

He said that despite roadblocks set up by the Israelis, he will continue.

“I have been trying to open a business in Ramallah for the last couple of years … business is what I know best. We need to industrialize Palestine,” Shami said.

“By hook or by crook, we will open a factory in Palestine and I will hire hundreds of people in Palestine. That is the duty and responsibility of each and every one of us that makes it outside of the country of Palestine. I am not opening a business there to make money although it is a virgin market. It is a great market. It can be very successful. My hope for the future for peace really depends on the economy of Palestine. If we are having a good economy and we are sending our kids to school for their education, their health and their security, that is independence. I am not into politics.”

Shami said he ran for governor in 2010 “to prove to the Americans we are hard working people. We are good Americans. We are good citizens. We are good people. It is not what the media gives us the image. … I brought thousands of jobs to the State of Texas. But now I feel it is my responsibility to bring jobs to Palestine. So now I am telling all Palestinians, please help Palestine. Please help the economy. Let’s go there. Let’s work together. Just create a few jobs.”

HCEF is headed by Palestinian Christian Sir Rateb Rabie and the group defines its mission as being “committed to the continued presence, empowerment, and well-being of Arab Christians in the Holy Land and to developing the bonds of solidarity between them and Christians elsewhere.”

The HCEF website is www.HCEF.org. The entire program is available online by clicking here.