Vandalism in Akraba: “Such Acts Do Not Encourage Peace-Making”

Previous Next
Vandalism in Akraba: “Such Acts Do Not Encourage Peace-Making”

AKRABA – The mosque of the small village of Akraba in Palestine was vandalized on Tuesday October 14 by a small extremist Jewish group “Price Tag”. Mgr Shomali went on a visit to the site two days later, accompanied by a delegation from Jerusalem and Birzeit, in order to condemn the acts and show his support.

Akraba is a small village, exclusively Moslem, of 12 000 inhabitants situated between Nablus and Ramallah, built on an area of 5 000 dunoms.  Round the village, about 200 000 dunoms of land belong to the Municipality, planted with olive trees, almond trees or used for cattle. On these same lands, there came up over the last years four Israeli settlements, Itamar being one of them; the relationship with the settlers is very tense.

Last Wednesday October 14, an incendiary bomb was thrown at a mosque in Akraba.  Writing were discovered on the outer walls reading  “Price Tag” and “Kahane” (name of the founder of an extreme right  political party,  in favour of a Greater Israel “emptied” out of all its Palestinian inhabitants – Kach –  a party declared racist then banned  in Israel).  The Israeli Police opened an enquiry.   It is the second attack since three months committed by settlers against this village.

The attack took place around 2.30 am, when the faithful, exhausted after days of olives harvest, went to rest.  A window was shattered and fuel was spread through. Having seen fumes going out of the mosque, shortly before sunrise, inhabitants rushed to extinguish the fire, which in the meantime ate up a prayer carpet from the women’s oratory, and was about to spread out all over the structure.

A delegation from Jerusalem and Birzeit went on a visit to the scene to show its solidarity and to condemn the acts.  Among the visitors coming to meet the village mayor were the Imam of Birzeit ;  Mgr Shomali, Patriarchal Vicar of Jerusalem and Palestine ; Fr Manuel Mousallam, former parish priest of Gaza for many years, living  presently in his hometown Birzeit).

“Such act does not encourage peace-making; they only help to deepen hatred and harden the ideological wall which separates the two peoples”, said Mgr Shomali after the visit.

“Price-Tag” is the name of a small extreme right Israeli group that committed many acts in Palestine and in Israel since 2008, with the intention of revenging for all acts hostile to the expansion of settlements. 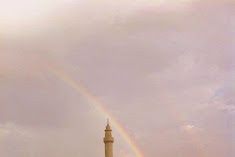