JERUSALEM – On Wednesday, November 19, Religious Leaders of Jerusalem: Christians, Muslims, Druze, visited the synagogue, which was the target of a vicious attack the day before.  Four Jews and an Israeli police officer were killed. The visit to the Jewish community was a  sign of solidarity and an appeal to the people of the  Holy Land and  the world to promote peace and freedom of religion.

“Your gesture is most welcome. If someone ever criticizes you, pretend not to hear him because your gesture is welcome”. These were the words that welcomed the religious leaders of Jerusalem at the Office of Religious Affairs of the Ministry of Interior, and later all together visited the synagogue in the Har Nof neighborhood in West Jerusalem.

This place of worship was attacked on November 18, four Jews, a police officer and two Palestinians were killed.

“We come as religious leaders to a place of worship, therefore to a holy place,”  stated His Beatitude  Fouad Twal, Latin Patriarch of Jerusalem. “These people were killed while praying.  Any place of worship belonging to any religion should be protected and sanctified”.

In the midst of a crowd of journalists and residents of the neighborhood  gathered in the synagogue’s courtyard,  the religious leaders  spoke one after the other, expressed their condolences to the community, and condemned the acts of violence directed at either Israelis or Palestinians.  Furthermore, they condemned violence and terrorism committed in the name of religion against another religion.  They renewed a fervent plea for freedom of expression and religion for all people of the Holy Land and around the world.

Christians and Jews are now preparing for their  holidays of Christmas and Hanukkah. In a time of a worsening situation in Jerusalem,  each day carries its share of fear, anxiety and disturbing events, the religious leaders expressed anew their desire to find and achieve peace. The meeting of Christians, Muslims, Druze and Jews in the heart of an ultra-orthodox  neighborhood is also a sign for the world and the  media, that when an attack is perpetrated, it is not only the target community that suffers, but all  those who struggle for peace  and for justice.

Once again Patriarch Twal urged everyone  “not to be afraid, to pray for peace.  Praying for the same goal can be an opportunity to get closer to each other.”   The Patriarch further said that this meeting proves that“hope is not dead, there is always hope to stop the violence .”

Keeping in mind stability in the Middle East, the Patriarch criticized the call by certain members of the Israeli government for a “harsh response,” a massive and extensive “arming”  of the population. “That is not a solution.  Political leaders should be smart and wise enough to lead all people toward peace, while restraining the escalation of  fundamentalism”.

If the meeting of these religious leaders is an evidence of dialogue, it is being carried out in a difficult and unfortunate situation.  In other words, the recurrence of these events under present circumstances is not good news.  But there is always hope that one day, they will warmly greet each other on behalf of their respective followers.  It will be a sign of peace for all mankind, in a Land that is indeed Holy. 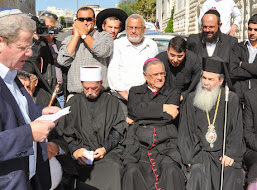 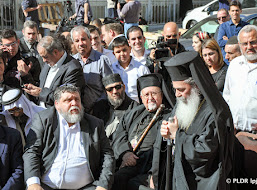 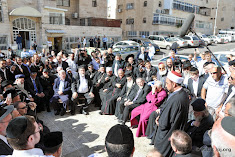