HCEF’S LEADERSHIP PREPARES FOR 2015 AND BEYOND AT ANNUAL RETREAT 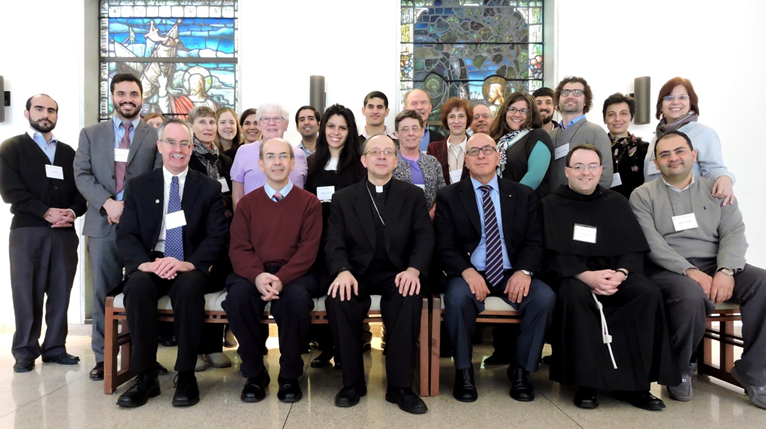 On Saturday, March 21, HCEF members and volunteers gathered together at the National Presbyterian Church in Washington, DC for HCEF’s annual retreat to find encouragement, spiritual nourishment, learn from educational presentations, and to plan the Foundation’s next steps into 2015 and beyond. People came from all over the local area and country to attend, while others were present through Skype, unable to attend in person, but committed to being part of the intentional and transformative retreat.

Some HCEF events discussed and planned for included: the 17th Annual International Conference and Awards Banquet, which will be taking place on October 16th-17th, 2015 at the Washington Marriott Georgetown; the Bethlehem Heart of Christmas, which brings Palestinian children, who otherwise lack easy access, from all over the Holy Land to Bethlehem in celebration of Christ’s birth; the Simulcast Message for Peace, which connects Christians in the U.S. with Christians in the Holy Land during the Christmas season to hear messages of peace and sing together in exaltation of Christ; and future Living Stones Pilgrimages (LSP) were also discussed, which bring pilgrims in contact with the “Living Stones,” Palestinian Christians, during their time in the Holy Land.

The retreat was also a time to celebrate new additions to the HCEF team of volunteers and members: Adam Griswold, HCEF’s newest Board Member, the Treasurer and Pilgrimage Director; Dorothy Buck, director of HCEF’s Children’s Education Fund (CEF), Clare McGrath-Merkle who will focus on HCEF’s fundraising efforts, Reem Shamoom, HCEF’s new Strategic Intern for Communications and Outreach, and volunteers Father Dominic and Rima Kawas who will be working with HCEF on outreach and advocacy along with many others who are committed to work for and support the Foundation’s mission. There are many more volunteers who were unable to attend the retreat, but they sent many messages of encouragement and renewals of commitment to do whatever it takes to care for their Christian brothers and sisters in Palestine. 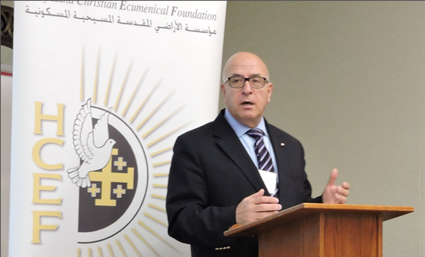 Sir Rateb Rabie, KCHS, HCEF’s President/CEO, welcomed everyone and introduced participants to one another and said, “This is family, those who are willing to come together for each other and a common goal,” establishing a communal an intimate setting for discussing HCEF’s achievements, its vision, and its future goals. 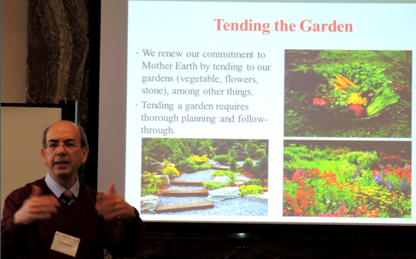 Dr. Saliba Sarsar, HCEF’s Secretary of the Board, gave the first presentation on “Spring, Motherhood, and HCEF’s Transformative Role” – an appropriate discussion as that Saturday was Mother’s day in Palestine. His talk touched on the nurturing essence of Mary, the Mother of God, and of mother’s in general, and highlighted HCEF’s transformative role in replacing despair with HOPE, fear with HUMAN SECURITY, humiliation with DIGNITY. 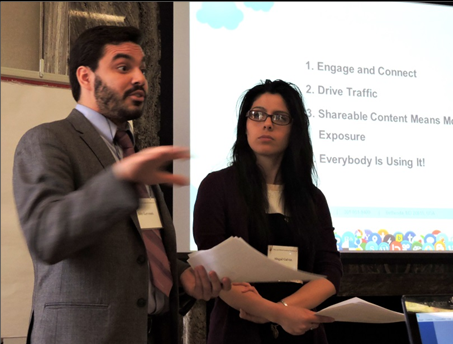 John Karvonen, HCEF’s Communications and Programs Coordinator, andAbigail Galvan, HCEF’s Executive Assistant to the President and Special Programs Coordinator, presented on the importance of social media for carrying out HCEF’s mission. Participants were inspired by how easy yet effective social media is to utilize and they brainstormed together to enhance HCEF’s online presence and develop new campaigns to spread HCEF’s life-giving mission. 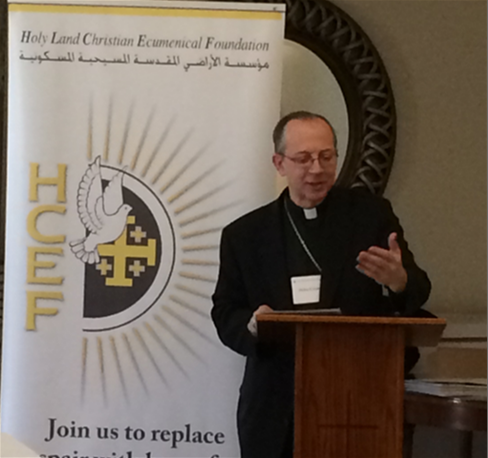 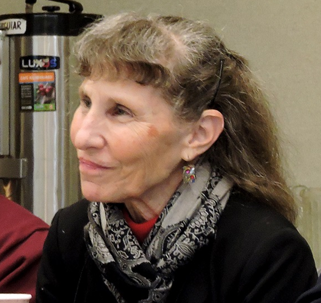 Sir Rateb Rabie shared HCEF’s work over the past year with presenters, touching on the Bethlehem Museum, the Muslim-Christian Coalition, Young Business Leaders, and other new initiatives and projects. Sir Rabie also brainstormed with participants on how they can grow HCEF’s presence in the U.S. and make deeper connections with Christians of the Holy Land. 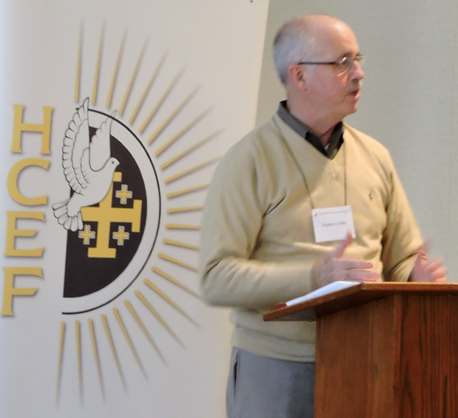 The last presenter of the afternoon was Stephen Corbin, D.D.S., M.P.H. who spoke on “Pilgrimage to Pilgrimage,” focusing on the power of HCEF’s Living Stones Pilgrimage to transform lives and make real change in the Holy Land by connecting people to people. Many participants at the retreat had been on LSP (some multiple times) and they shared powerful and emotional testimonies with the group. 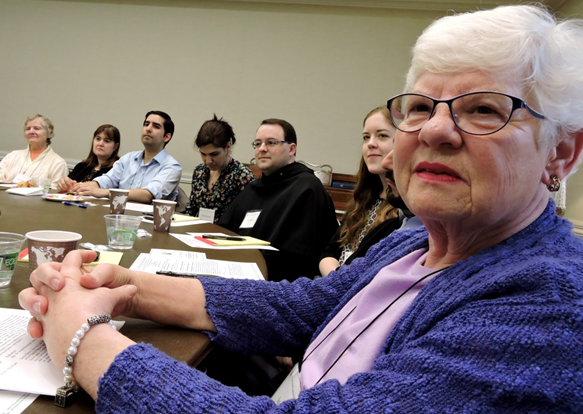 The retreat was wrapped up at the Rabie residence with a wonderful dinner consisting of traditional Palestinian dishes prepared by Sir Rabie’s wife, Rocio Rabie. HCEF volunteers and members finished the retreat spiritually (and physically) nourished and inspired with ideas and plans on how to grow HCEF and its mission to care for Holy Land Christians.

If you would like to join the HCEF family, there are plenty of volunteering opportunities to support our brothers and sisters in Christ who call the Holy Land their home. Please contact Abigail Galvan, the Executive Assistant to the President and Special Programs Coordinator, by email at agalvan@hcef.org, or call 301-951-9400 ext. 219.

Please visit us online at hcef.org. And if you are able, please give to our cause HERE.