One year ago, tens of thousands of Christians fled ISIS – those who lived through it, remember

Previous Next
One year ago, tens of thousands of Christians fled ISIS – those who lived through it, remember

On 6 August 2014 the life of the church in Iraq was changed forever: more than 120,000 Christians were forced to flee from jihadists of the terrorist organisation “Islamic State” (IS or ISIS). Since then, most have been living as destitute refugees inside or outside of Iraq. One year later, the Catholic pastoral charity Aid to the Church in Need (ACN) is holding an international prayer event to commemorate a day that will never be forgotten by those who lived through it.

“It was horrible. We fled on the evening of the 6th of August. I can still see the horror written on the faces of the people. They feared for their lives. They thought that ISIS would kill them. I thought the same. I did not know if I would live to see the next day.” One year later, Rami, a 22-year-old Christian, is living at the Mar Elia Centre, a refugee camp in Erbil, the capital of the autonomous Kurdish region in northern Iraq where most Christians sought refuge.

“I come from Mosul. However, we had already left the city in January of 2014 because it became unsafe. Jihadists were kidnapping Christians. You had to fear for your life,” the young man reports. For this reason, he and his parents and sister went to Qaraqosh, the largest Christian city in Iraq. They rented a house there. In August of 2014, however, they became refugees once more. Rami recalls how the sounds of fighting intensified on the morning of 6 August. “When we saw that the Kurdish soldiers, who had up until this point defended us, were withdrawing, we knew that it was also time for us to leave. After all, there was nobody standing between us and ISIS anymore.” According to Rami, the events that followed were dramatic. “People were panicking. Many just took off running in order to reach safety.” Rami himself fled with his family in a cousin’s car. “I even forgot my identity card in the hectic rush. We then arrived in Erbil around one o’clock at night. It was complete chaos there.” In fact, the city was full of thousands of refugees. “We had to sleep in the garden of the Mar Elia Church. Under the stars. After that, we were put in a car park. After a few weeks, we returned to the Mar Elia Centre. Soon we were able to move into a simple tent there.”

Today, Rami, like hundreds of other people, lives in a caravan that was purchased with the help of Aid to the Church in Need. One year later, Rami is no longer confident that he will soon be able to return home. “I cannot rely on either the government or the army of my country. They simply left Mosul and the other places at the mercy of ISIS.” This is why he does not believe that his home will be retaken anytime soon. However, for Rami, the problem lies far deeper. “We Christians have no rights here and no security. Furthermore, the Shiites and Sunnis are at war with one another. This is why I want to get away from here. Today rather than tomorrow. I don’t see a future for me here in Iraq. It is my impression that most Christians want to leave.” Rami would like to go to the West. However, in order to do so, he would have to register as a refugee with the United Nations in one of the neighbouring countries. However, Rami and his family cannot afford this. “We are not allowed to work in Lebanon, Turkey or Jordan. However, it often takes one, two, three years before one is permitted to leave the country. Up until this point you have to live off of your savings. However, we don’t have any.” 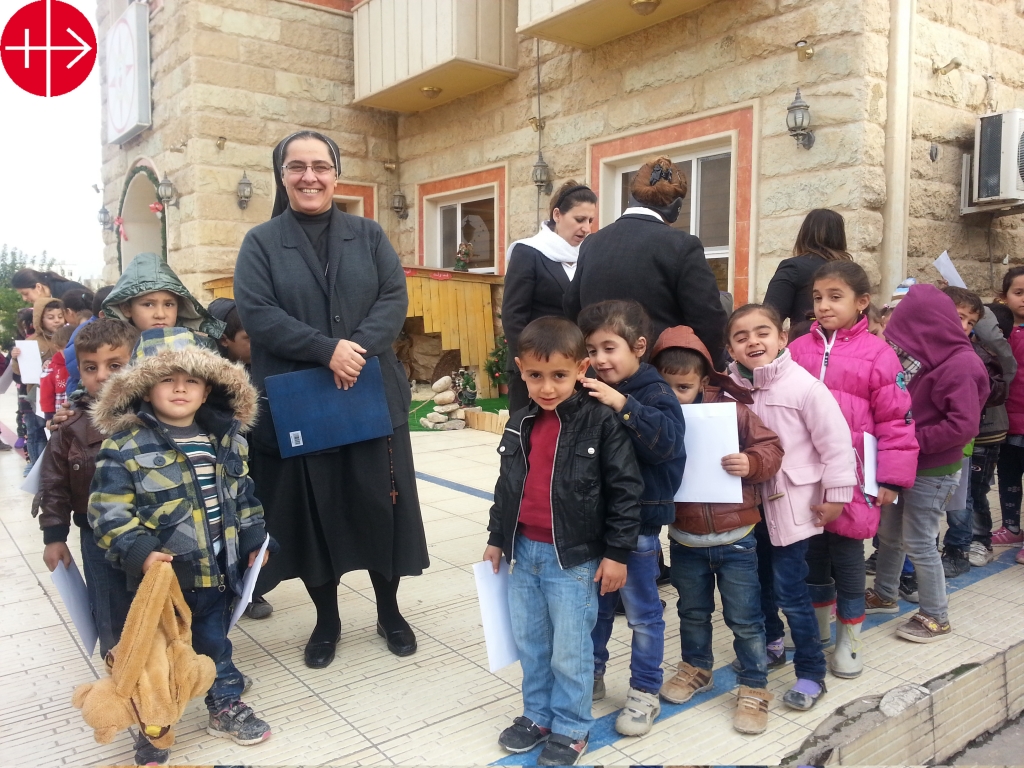 Sister Sanaa Hana is the superior od the Sisters of the Sacred Hart. Their convent in Mossul was destroyed by ISIS. Before the sisters had to flee the City and leave everything behind. The Picture shows Sister Sanaa in Erbil with children in front of a house of the congregation where she found refuge.

Sana has been helping Christian refugees like Rami from the very beginning. The young woman works for the Chaldean diocese of Erbil. “I heard on the news that IS was advancing towards the Christian towns. And then the first refugees began to arrive here. Their numbers kept on growing throughout the night and into the next morning.” Like many young people from Erbil, Sana immediately began to help care for the new arrivals. “It was awful to see the people. Some literally didn’t have anything with them. They fled in panic. They thought that ISIS would catch up with them. Some drove for twelve hours or more from Qaraqosh to Erbil because the roads were so crowded. Normally it is not far.” She herself did not have any time to think. “We just helped. We worked twelve hours a day or more, often until late into the night. I will never forget those days.” When she looks back today, she wonders where the many thousands of people who fled to Erbil in August all went. “When the people arrived here, they slept on the bare floor. And now everyone has a flat or at least a caravan. A lot has happened.” But she also says that life is of course not easy for the people. “At the beginning, they thought that they would only have to stay here for a few days or weeks. However, as this then turned into one month, two months, three months, they realised that it was probably going to take longer. Many have given up hope that they will ever be able to return.” Sana says that, even one year later, the words of the bishop of Erbil are a comfort to her. “When people asked him where Jesus was in those August days, he responded in a sermon: Jesus was fleeing with you. He ran at your side. That is the only reason you are still alive.”

Sister Sanaa will also never forget the August of last year. The mother superior of the Congregation of the Daughters of the Sacred Heart of Jesus recalls: “We sisters were in Erbil. We were preparing for our annual retreat. Then we heard about what had happened in Qaraqosh and the surrounding areas. We asked the bishop what we should do. He said that we should go through with our retreat. However, these were very sad days for us. We prayed so hard for the people who flocked to Erbil.” 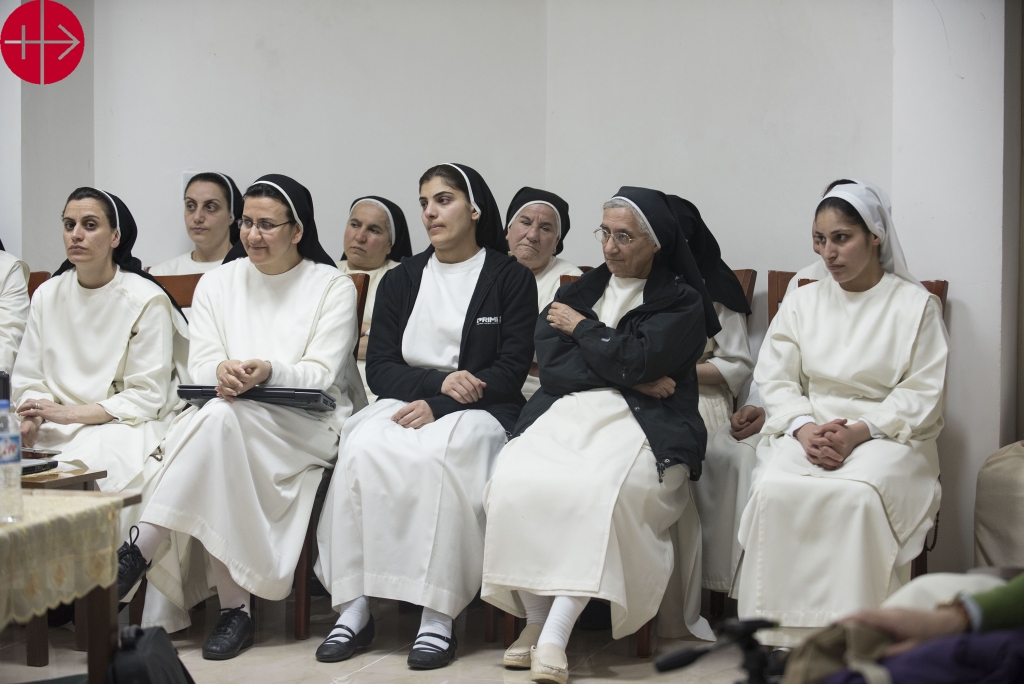 When the Sisters returned from their retreat, they saw people lying in the streets. Churches, schools and other public buildings were already overflowing. The Sisters quickly began to help the people. One year later, Sister Sanaa looks back with sadness. “The longer this situation continues, the greater the suffering of the people becomes. For me, the situation is worse now than it was several months ago. The hope is dying.” For this reason, the Sister has placed all her faith in prayer. “As Iraqis and as Christians we are dependent upon prayer. Only prayer can help us in this horrible situation. We firmly believe that God is with us. Please think of us on the 6th of August.”

Like Sister Sanaa, Father Douglas Bazi was at first shocked by the magnitude of the crisis. The Chaldean priest runs the Mar Elia Centre in Erbil. He vividly remembers the 6th of August. “I was in the US. I returned as soon as I heard the news. However, because the airport in Erbil was closed, I was at first stranded in Ankara. I only arrived in Erbil on the 7th of August.” There, the Baghdad-born priest saw the great need. “Tens of thousands of people who arrived here with nothing; at first, this completely overwhelmed me. The people were totally lost. Their faces reflected the anger, confusion and desolation. To me, they were like bodies with dead souls. Some did not even want to eat. They said: ‘Why? To live? What for?’ When I saw that, I thought: This is the end. Outwardly, I tried to be strong. But inwardly, I was destroyed. What could we do now? I knew that 60000 Christians were living in Qaraqosh alone. How could we ever help so many people?” However, Father Douglas quickly began to focus all of his energies on organizing the emergency aid. 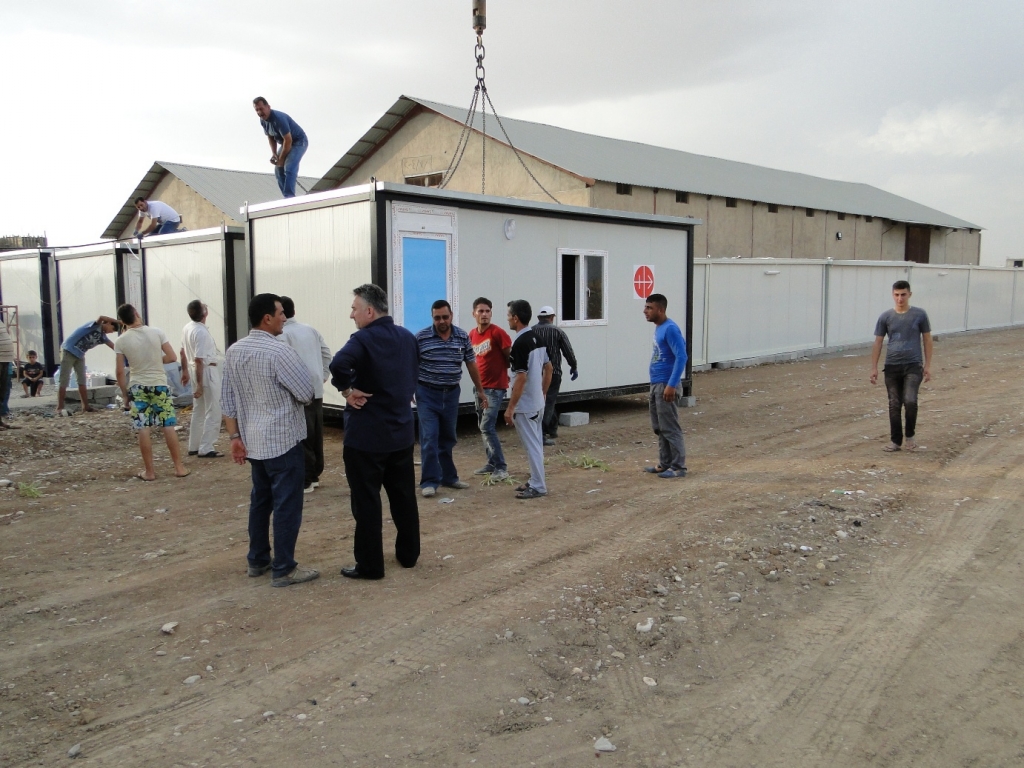 Meanwhile, life at the Mar Elia Centre is well organised. No one is still sleeping on the ground. Caravans provide more dignified housing for 130 families. Many families have also found real flats and have moved. “I try to find something for the people, and especially the boys, to do. We offer language courses. The children are also learning how to play instruments or how to use a computer. But they ask me: What will happen next? This scares me. Soon, I may no longer have an answer. And what then?” he asks himself. “Each day, the people lose more of the hope of ever returning. However, I am surprised how calm the people are despite this.” Father Douglas will be observing the 6th of August with a service. “The 6th of August is a day of sorrow, but also the day that God saved us. We are, after all, still alive. We will celebrate a mass. We cannot forget what happened. However, we will ask God to forgive the perpetrators and to change their thinking.” He entreats the benefactors of Aid to the Church in Need to join them in prayer.

“We feel the power of their prayers. This is the only reason we can continue. As the members of one body of Christ it is our responsibility to be there for one another. The church in Mesopotamia is confronted with evil. Please pray that my people will be able to stand firm in the face of the devil!”

The Catholic pastoral charity Aid to the Church in Need is helping the Christian refugees in Iraq in many ways. Immediately following the 6th of August, a delegation travelled to Iraq to get an idea of what was happening. Since then, about twelve million dollars have been spent to house and care for the people and to build a number of schools for thousands of refugee children.