Christian refugees discriminated against by US and UK governments

Previous Next
Christian refugees discriminated against by US and UK governments

Christian refugees are being unintentionally discriminated against by the US government’s refugee scheme, new figures suggest.

New statistics reveal that only 2 per cent of Syrian refugees accepted by the US since the conflict broke out in 2011 are Christian. By contrast, over 96 per cent are Muslim, according to US state department statistics. 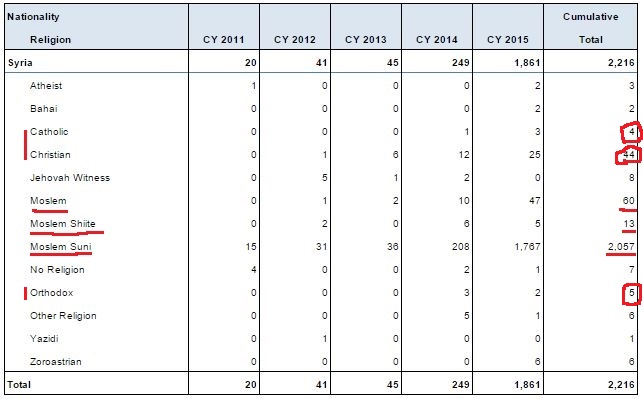 The US government rely on United Nations refugee camps and application processes to decide which refugees to accept. The majority of refugees considered for resettlement in the US and in the UK are referred by the UNHCR.

However sources in Syria and Iraq say that Christians fleeing persecution deliberately avoid UNHCR refugee camps because they are afraid they will be targeted there. Instead they are housed in local churches and Christian houses and are therefore not processed through the UNHCR scheme.

Only 53 Syrian Christians have been accepted by the US since the conflict broke out in 2011. This is compared to 2,250 Muslims out of a total of 2,216. The Syrian population is made up of more Muslims than Christians – 87 per cent and 10 per cent respectively – but the figures still represent a significant disparity.

In the wake of the Paris attacks, fears about accepting refugees have risen after it emerged that some of the perpetrators may have entered Europe disguised as refugees. Several US senators have called for the US to re-evaluate its refugee policy and Republican presidential candidate Jeb Bush was among a group calling for a focus on Christian refugees.

However President Obama said calls to admit Christian refugees but not Muslims were “shameful” and “not American.”

Similarly to the US, the UK’s vulnerable persons resetttlement scheme operates though the UNHCR camps and so is also likely to unintentionally discriminate against Christian refugees.

Lord Carey, former archbishop of Canterbury, warned in an article for The Telegraph last month that “the most vulnerable and repeatedly targeted victims of this conflict” are being excluded.

“Mr Cameron’s policy inadvertently discriminates against the very Christian communities most victimised by the inhuman butchers of the so-called Islamic State,” wrote Carey.

“Christians are not to be found in the UN camps, because they have been attacked and targeted by Islamists and driven from them. They are seeking refuge in private homes, church buildings and with neighbours and family.”

The head of the Coptic church in the UK, Bishop Angaelos, stopped short of saying only Christian refugees should be accepted but told Christian Today “it should be the ones at the greatest risk.”

“Often that is the Christians,” he added.