Peace, Mercy and Action at the Heart of the Patriarch’s Christmas Message

Previous Next
Peace, Mercy and Action at the Heart of the Patriarch’s Christmas Message

JERUSALEM – On December 16, His Beatitude Fouad Twal, Latin Patriarch of Jerusalem held his traditional Christmas press conference. Below is an abridged version of his message.

Dear Friends and Faithful of the Holy Land,

To all of you and those dear to you, I wish you a Christmas full of joy and blessings!

To our dear journalist-friends, thank you for your presence here today.  Thank you for the valuable work, which you carry out with openness, freedom and wisdom, best guided by a continual concern and interest for the Truth.

In a few days we will celebrate the birth of Christ; Christmas, the mystery of the Incarnation, the mystery of the Eternal Word who “became flesh and dwelt among us.” Christmas, the feast of the Light, that shines in the night, a celebration of joy, hope and peace. Children of the world dream of a wonderful celebration with gifts, lights, decorated trees and crèches.  However, and I repeat the same words of Pope Francis, everything is distorted “because the world continues to make war.”  This famous “third world war being fought in pieces.” which he speaks of so often, is unfolding before our eyes in our region.

What a suffering it is, to once again see our beloved Holy Land caught in the vicious cycle of bloody violence!  What a pain to see anew, hatred prevail over reason and dialogue! The anguish of the people of this land is ours, which we cannot ignore or disregard.  Enough!  We are tired of this conflict as we see the Holy Land sullied with blood.

To the Israeli and Palestinian leaders we say, it is time to show courage, and work for the establishment of a just peace.  Enough of stalling, reluctance and false pretenses!  Respect international resolutions!  Listen to the voice of your people who aspire for peace, act in their best interests!  Each of the two peoples of the Holy Land, Israelis and Palestinians, have the right to dignity, to an independent state and sustainable security.

Alas, our situation in the Holy Land resonates that of the world facing an unprecedented terrorist threat.  A deadly ideology based on religious fanaticism and obstinacy is spreading terror and barbarism amidst innocent people. Yesterday, it was Lebanon, France, Russia, the United States; but war has been raging for years in Iraq and Syria. The situation in Syria is also at the center of this crisis; and the future of the Middle East depends on the resolution of this conflict.

These terrible wars are driven by arms trade, involving several international powers.  We are facing a situation of total absurdity and duplicity.  On one side, some speak of dialogue, justice, and peace, while on the other hand promote the sale of arms to the belligerents!  We call to conversion, these unscrupulous arms dealers who may be without conscience, to make amends.  Great is your responsibility in these devastating tragedies, and  you will answer before God for the blood of your brothers.

Military response and the way of force cannot solve the problems of humanity.  We need to find the root and cause of this scourge, and to tackle them. We must combat poverty and injustice, which may constitute a breeding ground for terrorism. Similarly, we must promote education on tolerance and acceptance of the other.

The Church and the community of believers also have to respond to the current situation. This response is the Jubilee of Mercy, inaugurated on December 8 by Pope Francis. Mercy is the remedy for the ills of our time. It is through mercy that we make visible to the world the tenderness and closeness of God.

Mercy is not limited to individual relationships but embraces public life in all its sectors (political, economic, cultural, social), at all levels (international, regional and local) and in all directions (between states, peoples, cultures and religions). When mercy becomes a basic component of public action, the world can be transformed from the sphere of selfish interests to that of human values.

“Mercy is a political act par excellence, provided the policy is set in its noblest sense, of caring for the human family beginning with ethical values, of which mercy is a principal component opposed to violence, oppression, injustice, and the spirit of domination.”

During this Year of Mercy, we invite pilgrims to visit the Holy Land.  Upon the invitation of the Holy Father, we opened a Holy Door, a Door of Mercy in designated Churches in the diocese: the Basilica of Gethsemane in Jerusalem, the Basilica of the Annunciation in Nazareth and the Church of Saint Catherine in Bethlehem.  Pilgrims should not be afraid to come. Despite the tense situation in this land, the pilgrim route is safe and they are respected and appreciated by all sectors in the Holy Land

We also believe in the fundamental value of education. How can we ever forget the bitter struggle to uphold our Christian schools in Israel? How can we not thank all who participated, the parents, children and teachers? A number of political leaders and officials, including Israeli President Reuven Rivlin and several members of the Knesset, have worked for this worthy cause. They have shown a commitment to education offered by the Christian schools that is open to all citizens without distinction, and based on fraternal principles, dialogue and peace.

This interfaith perspective brings me to the fiftieth anniversary of Nostra Aetate, probably the most revolutionary document of the Second Vatican Council. This declaration lays out the foundation for dialogue between the Church and non-Christian religions.  Here in the Holy Land, this dialogue is of paramount importance where difficulties exist, but it is necessary to continue to hope all the more, to the viability of a Jewish-Christian-Muslim dialogue.

I also commend our St. James Vicariate for Hebrew-speaking Catholics, which celebrated its sixty years of existence.  It continues to work for Jewish-Christian dialogue, and in generously serving the migrant communities.

The current political situation suggests for moderate celebrations and deepening our spiritual sense of this remembrance.  For this reason, we invite every parish to switch off Christmas tree lights for five minutes in solidarity with all victims of violence and terrorism.  Similarly, our Christmas Mass will be offered for the victims and their families, that they take to heart, the participation in the joy and peace of Christmas.

Since the beginning of this month, and together with the Custody of the Holy Land, we have created a committee to reorganize the solemn entry of the Patriarch into Bethlehem on December 24.  Several measures have been carried out so that the arrival of the procession in Bethlehem is not delayed and in an orderly manner in the Manger Square and the area of the Church of the Nativity. A place for journalists and photographers has been designated.

I would like to conclude by thanking Pope Francis for several reasons.  First, for the canonization of the two Palestinian saints last May, and subsequently for the Synod of Bishops on the Family, to which I had the joy of participating; for the Motu Proprio simplifying the process for the nullity of marriage; for the historic Bilateral Agreement between the Holy See and the State of Palestine; and finally for his encyclical “Laudato Si” on major issues for our planet and humanity, the care for our common home, for creation and protection of the environment.

“For a child is born to us, a son is given to us; upon his shoulder dominion rests.  They name him Wonder-Counselor, God-Hero, Father-Forever, Prince of Peace.” (Is 9:5)

Dear friends, the birth of Christ is a sign of the Mercy of the Father and a promise of joy to us all. This message shines upon our wounded world, to console the afflicted, the oppressed, and to bring about conversion to violent hearts.

A blessed and joyous Christmas to all! 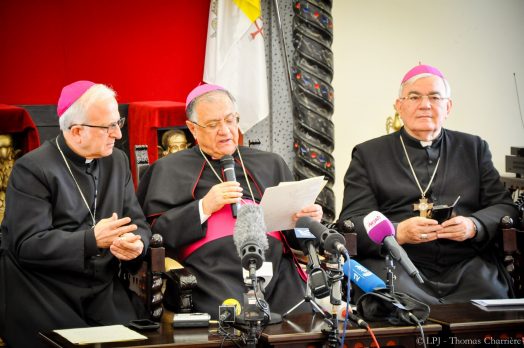 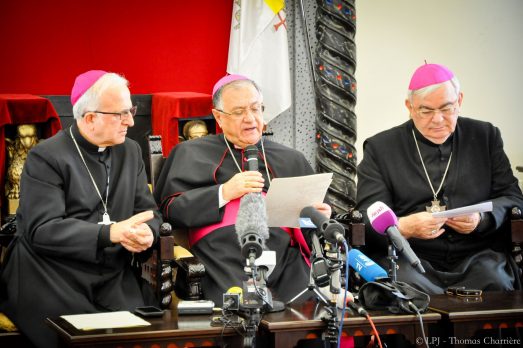