Previous Next
Gaza’s Christians: ‘Israel can’t beat us down’

As he turns his back a few seconds later, the worshippers fall back onto their carved wooden seats in tandem. Hundreds of Christians from Gaza cram the building, they sing, worship, and move at times, in what seems like age-old routine.

The church’s interior is coated with tapestries depicting saints and biblical scenes. Candles illuminate the walkways and walls, bringing life to centuries old artwork as they flicker, the shadows dancing on the fading paint.

For Christians around the world, including the worshippers in Gaza City, it’s a special time of year. 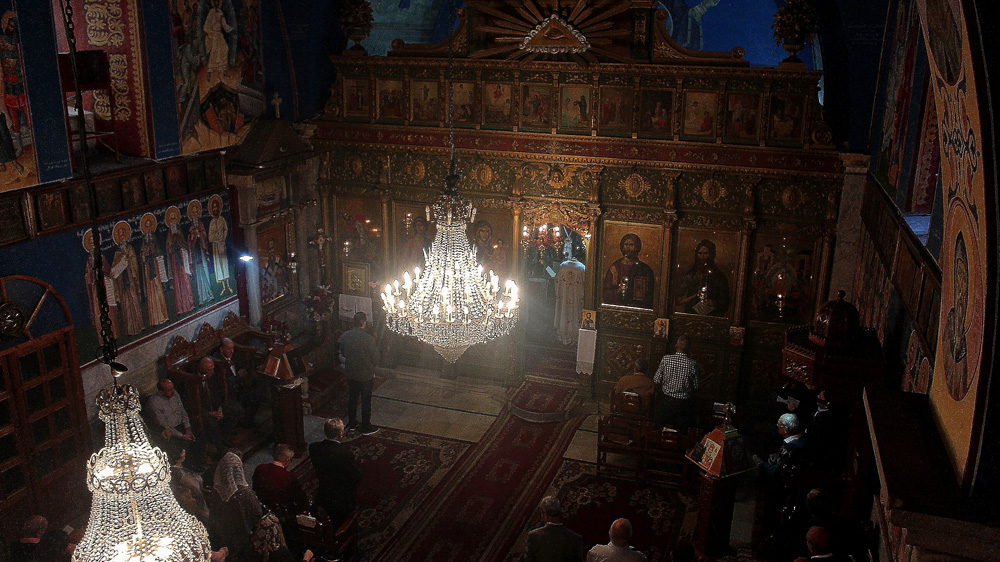 As people around the world celebrate Christmas, Christians from Gaza say they are looking to the festivities as a chance to find relief from the ongoing struggle of living in the besieged Palestinian territory.

The scenes inside the church, of prayer and celebration of Christianity, mirror similar scenes in churches around the world.

Yet by stepping outside onto the crowded streets of Gaza city, the unique problems facing the residents of Gaza – Muslim and Christian – become evident.

In some districts, buildings remain completely destroyed after Israel’s bombardment in the summer of 2014, a 50-day aerial assault and partial land invasion that helped to push upwards eighty percent of Gaza’s residents into poverty.

The continuing Israeli blockade on Gaza has virtually stopped the freedom of movement and goods, the unemployment rate now standing at forty-three percent, and youth unemployment at sixty percent – the highest in the world, according to a World Bank report earlier this year.

The United Nations has already claimed that if the blockade and current situation continues, Gaza could be ‘unlivable’ by 2020.

“Christmas is always an important time of year for us, and to be with family and celebrate our religion. It gives us strength especially in hard times,” says Michael Tarazi a worshipper at Saint Porphyries church. “But we can’t forget our situation in Gaza, everyone here, Christian, Muslim, young, old, they suffer from it.”

The religious minority in Gaza now stands at 1200, down from estimates of around 3000 just a few years ago. The number is expected to continue decreasing as community members take any chance to leave the area and pursue a life elsewhere.

Although houses are decorated, families gathered, and Christmas celebrations are in full flow, Pastor Hanna Gerkis of the Baptist Arabic Church says Palestinian Christians may celebrate but they haven’t forgotten the situation in Gaza – festivities may bring respite but they don’t damper defiance, he added.

Continuing religious practices during the festive period, amid the political and economical problems, and in the face of the ongoing Israeli blockade is a form of resistance.

“Trying to get on with life as much as we can in the difficult situations, is important for us,” he says. “And it shows Israel they can’t beat us down.”

Gerkis, an Egyptian citizen, came to Gaza in 2011. Speaking in soft tones, he says he made a promise to God that he would serve in the most needy places in the world, “by coming to Gaza, I obeyed what I promised,” he tells Al Jazeera.

Gerkis begins listing of names of some of the families in his congregation. Christian families who are celebrating Christmas in Gaza, but whose roots are not from the area – they’re refugees, their relatives forced from their homes during the creation of Israel in 1948.

Christmas celebrations may be ongoing, but there is a deep belief among refugees that they should be celebrating not in Gaza, but in their hometown.

“Like these families, people were forced from their homes over 60 years ago, and now because of the occupation, people don’t have a life here, they don’t have rights. These people want to go back, they have a right to return to their land.” Gerkis says.

“People from outside may think this is a religious conflict between Muslim people and Jewish people, and maybe it looks that way to some people because Israel wants to make it look that way, but it is not. Palestinians were forced from their land.”

For Christians throughout the besieged Palestinian territory, there is a real belief that the world has let them, and other Palestinians down.

As countries and Christians around the world celebrate Christmas, and celebrate Palestinian towns such as Bethlehem – the birthplace of Jesus – in pictures and in carols, Christians in Gaza such as Tarazi, claim a double standard.

“I want to say to Americans and Europeans that our reality as Palestinians and Palestinian Christians is this: We have no rights,” Tarazi says.

“In Gaza we fear another war, there are no jobs for our children. This isn’t a life. We need people to help find a solution to this situation and make peace, which will help everyone, the Muslims, Christians here – the Palestinians – and the Israelis, everyone.”