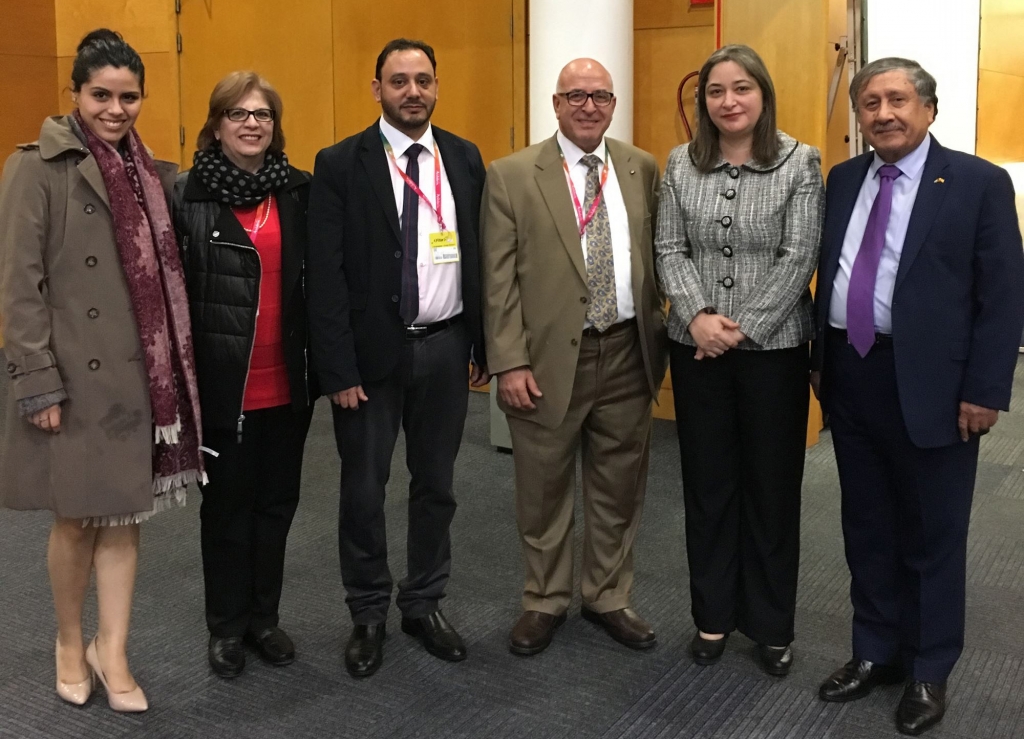 From left to right: Abigail Galvan, HCEF Special Programs Coordinator; Rocio Rabie, HCEF PR Officer; Eng. Anthony Habash, HCEF Regional Director; Sir Rateb Rabie, KCHS, HCEF President/CEO; H.E. Rula Ma’ayah, Palestinian Minister of Tourism and Antiquities; H.E. Musa Odeh, Palestinian Ambassador to Spain
MADRID, SPAIN – On January 20-24, 2016, the Holy Land Christian Ecumenical Foundation (HCEF) participated in the 36th Annual International Tourism Trade Fair, FITUR. FITUR is a member of The Global Exhibition of Tourism and Industry (UFI) and the UN World Tourism Organization (UNWTO). The trade fair is the largest of its kind, boasting 9,419 exhibiting companies from 165 countries/regions, 125,084 trade participants and 97,467 people from the general public.
Recognizing FITUR’s importance to international tourism, HCEF attended to promote Palestine, and Bethlehem in particular, as a religious destination for pilgrims from around the world. Despite Bethlehem’s central role in the Christianity, many pilgrims are unaware of its accessibility as a travel destination. Additionally, those who do visit the ancient city are often there briefly, only to see the Church of the Nativity. These pilgrims do not know of opportunities for extended stays in Bethlehem. 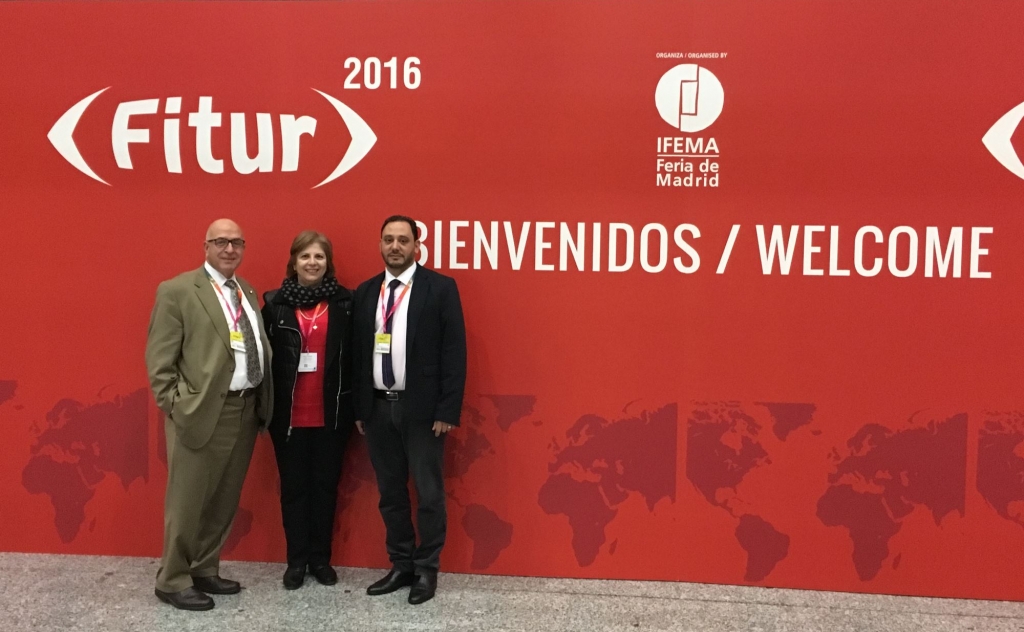 Tourism is a lifeline for the people of Bethlehem and Palestine in general. By promoting the region as a religious destination jobs will be sustained and created, families supported through trade, and life made viable in an area that faces countless daily challenges. HCEF sought to shed light on Bethlehem as a feasible pilgrimage destination where devotees can stay in one of many quality hotels, visit with Palestinian Christians, and support shipowners and food vendors. HCEF directly highlighted the many Palestinian-run tourist companies available to pilgrims and also promoted its own Living Stones Pilgrimage (LSP) program. Through LSP, pilgrims do see the many religious sites of the Holy Land, but even more, they interact with the “Living Stones,” the Palestinian Christians who have preserved faith traditions and structures since the time of Christ.  They also visit HCEF’s Bethlehem Museum of Heritage and Culture, which has artifacts dating as far back as 3,000 years, highlighting the continuous presence of a rich culture over millennia – the deep roots of Palestine’s people. The Museum shows how the ancestors of Palestinians were among the first followers of Christ, and that the Palestinians of today continue to sustain Christianity in the land where it all began.

Sir Rateb Rabie, KCHS, HCEF President/CEO, led the delegation of HCEF staff attending the trade fair. Of this trip, the President said, “We are here to show the world that Palestine is rich in historical traditions and culture. It is a ‘destination’ for pilgrims and tourists alike who wish to experience history come alive through its land and people. Most importantly, international visitors directly support Palestinians who struggle amid ongoing conflict, contributing to prosperity and job creation. Such tourism creates mutual understanding, a fundamental pathway to peace. This is what HCEF is supporting at FITUR.” 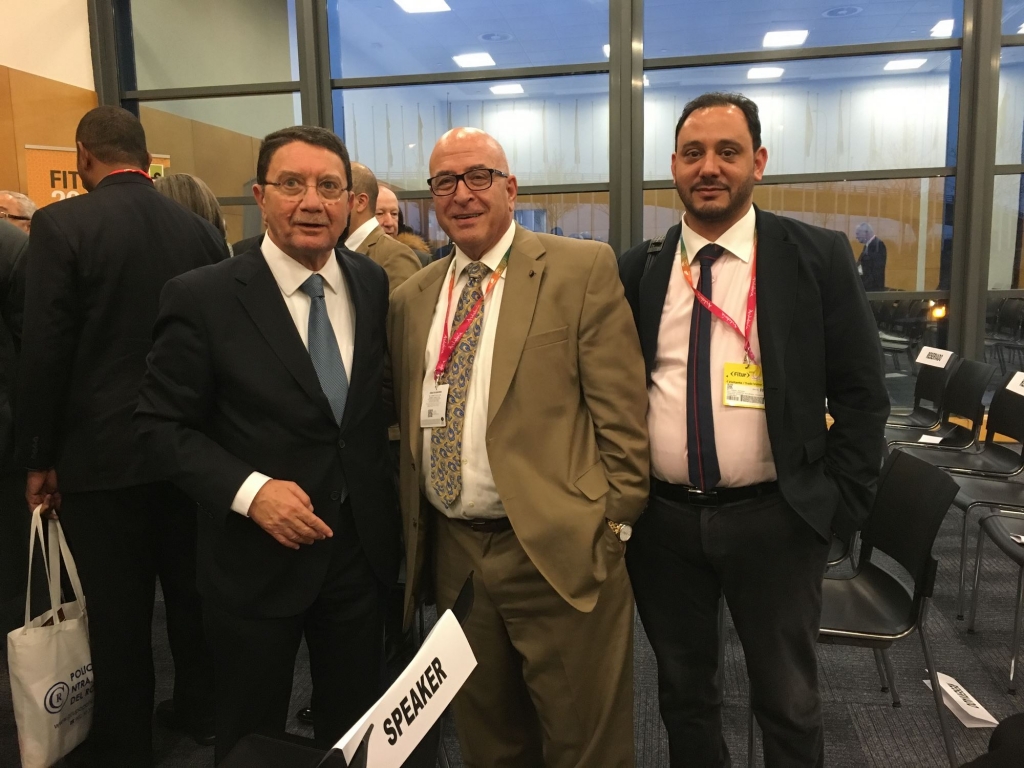 UNWTO Sec. Gen., Taleb Rifai with Sir Rateb and Eng. Habash
Sir Rateb met with several of the exhibiting companies and trade participants, among them UNWTO Secretary General, Taleb Rifai. Prior to being the Secretary General, a position he’s held since 2010, Mr. Rifai has served in several ministerial portfolios in the Government of Jordan as Minister of Tourism and Antiquities; Minister of Information; and, Minister of Planning and International Cooperation. From 1993 to 1995, he headed Jordan’s first Economic Mission to Washington DC, promoting trade, investments, and economic relations between Jordan and the USA.
Together, Sir Rateb and Secretary General Rifai discussed several of HCEF’s initiatives that promote religious tourism, job creation, and general support for Palestinian Christians in the Holy Land. The Secretary General, impressed by HCEF’s work, gave his full endorsement of the organization and its activities. 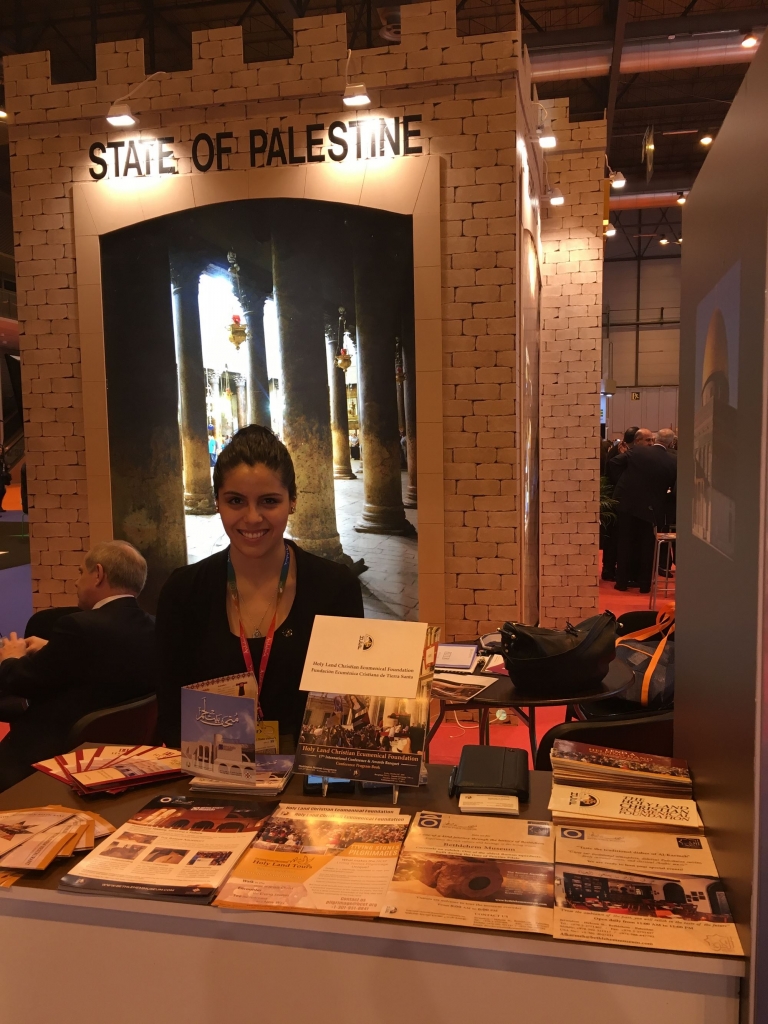 Ms. Galvan hosting HCEF’s exhibit at FITUR
H.E. Palestinian Minister of Tourism & Antiquities, Rula Ma’ayah, also attended FITUR. During her time there, the Minister highlighted the many challenges facing Palestine’s tourism industry. Yet she also spoke with great optimism for the future, recognizing the international community’s growing support for the Palestinian cause and the potential for tourists and pilgrims throughout the world to see Palestine, and Bethlehem in particular, as a priority destination for religious and cultural travel.
To learn more about opportunities to support Palestinians and travel to the Holy Land, visit the LSP website: holylandtours.ps
Fadi Hanna 2016-10-24T07:18:17+00:00 January 25th, 2016|Categories: News, Press Releases|Tags: Bethlehem, Fitur, Holy Land, Madird, Spain, Tourism|