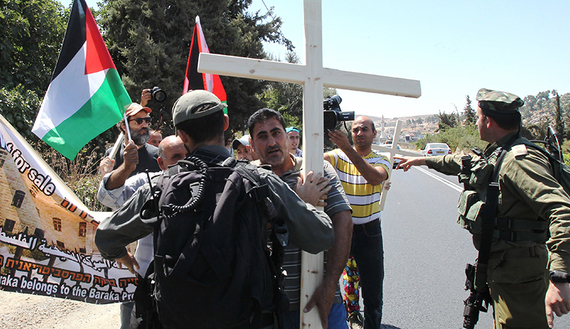 Palestinian, Israeli and Christian foreign activists confront Israeli soldiers as they walk toward Beit al-Baraka, a church compound, situated between the Al-Arub refugee camp and the city of Hebron in the occupied West Bank during a demonstration condemning the Israeli occupation, Aug. 15, 2015. (photo by Getty Images/Hazem Bader)

Israeli Defense Minister Moshe Ya’alon recently approved the annexation of the Beit al-Baraka church compound to the Gush Etzion settlements established on Palestinian territories south of the West Bank, according to a Jan. 6 Haaretz report.

Reportedly, Ya’alon was responding to pressure by Israeli settlers who are constantly breaking into the church compound under the protection of the Israel Defense Forces. These settlers claim that they bought the compound, where a fence and security cameras have been installed and the IDF prohibits anyone from entering. Meanwhile, Palestinians are organizing marches in Beit al-Baraka to protest the settlers’ control over the church.

According to Palestinian officials and Christian citizens who spoke to Al-Monitor, there are eight buildings on the 10-acre church grounds, including a hospital providing medical care and services to Palestinians. The compound is owned and supervised by the Presbyterian Church in Palestine, which in turn is affiliated with the Presbyterian Church in the United States, they said.

The US Presbyterian Church had control over the Palestinian Presbyterian Church’s endowments from 1940 to 2008, when the US organization sold Beit al-Baraka church to a Swedish shell company without consulting the church’s branch in Palestine. That company then transferred ownership of the church to an association controlled by Jewish tycoon Irving Moskowitz, one of the main funders of Israeli settlements in Jerusalem. Moskowitz then transferred the lands to the settlers, who now claim they bought the compound.

The Presbyterian Church in Palestine condemned the sale in an official statement issued June 17, and denied any involvement in the “suspicious deal that challenges the Presbyterian Church’s fight for the support of the Palestinian people and their national rights,” saying, “The Presbyterian mission in the US does not have the authority to sell this property, and anyone who contributed to secretly selling Beit al-Baraka to settlers should be punished.”

This issue has focused attention on the Israeli government’s and the settlers’ confiscation or long-term leasing of land and church endowment buildings in Palestine, Jerusalem, the West Bank and the 1948 territories.

Hanna Omeira, head of the Presidential Higher Committee of Church Affairs, told Al-Monitor Israel has seized numerous church endowment properties. “Some were seized from the heart of Jerusalem, like the land on which the Knesset center and the Israeli Cabinet’s headquarters were built. Moreover, wide land areas were rented, but there are no accurate statistics

Regarding the Palestinian Authority’s (PA) efforts to deal with the diversion of Beit al-Baraka, Omeira said, “A complicated fraud operation occurred to take over Beit al-Baraka. We wrote to the mother church in the US, but it refused to cooperate. The Swedish government does not have answers about the bogus company that bought the endowments and diverted them to Israel.”

He added that the PA and the Higher Presidential Committee of Church Affairs in Palestine are investigating political and legal recourse in the case. The committee has promised to follow up on Beit al-Baraka’s case with the Swedish government and will prepare a legal case to annul the deal. In the meantime, however, Israel continues these practices.

The Beit al-Baraka case is of particular concern because of the church’s location.

“This is a strategic and important area, as it is located on Highway 60,” which links Israeli settlements to Palestinian communities between Jerusalem and Hebron, according to Khalil Tafakji, director of the maps and survey department of the Arab Studies Society in Jerusalem. “It will be annexed to the Gush Etzion cluster of Jewish settlements, and the noose will be tightened on the Palestinian Arroub refugee camp in a way that separates the southern West Bank from its center,” he told Al-Monitor.

In the same vein, there is a movement concerning the Greek Orthodox Church in Palestine and Jordan. A group calling itself Arab Orthodox Youth in Jordan and Palestine is speaking out against Patriarch Theophilos III of Jerusalem. The movement’s organizers, who held sit-ins and marches Jan. 6, consider the patriarch “unworthy” due to actions they deem “racist against Arabs and wasteful with properties and endowments of the church that are being diverted to Israel.”

Those actions include the patriarch’s leasing to an Israeli company of almost 18 acres of land belonging to the Saint Elias Monastery south of Jerusalem. The Orthodox community believes the deal will leave the village of Beit Safafa surrounded by Israelis and allow them to expand their settlements in Jabal Abu Ghneim and Gilo.

Barham continued, “We are following up on the patriarchate’s endowments that are being taken over, through the Israeli media” and institutions like the Jerusalem Municipality and its planning and land departments. “This contradicts Patriarch Theophilos’ promise on Aug. 22, 2005, before his election, to regain the lands, stop deals and conduct an engineering survey for all the church’s properties and endowments.”

Barham said the takeovers of the Beit al-Baraka and Arab Orthodox endowments are part of “a systematic policy [by] the patriarch’s advisers.”

Alif Sabbagh, a member of the Central Orthodox Council in the 1948 territories, told Al-Monitor, “The patriarchate considers the Arab members of the Orthodox sect enemies, rather than partners in the endowments’ management, and forbids them from accessing any information related to these endowments.”

One radical solution to the diversions, according to Sabbagh, would be to “Arabize the spiritual leadership of all churches by appointing Arab clergy to senior church positions instead of Greek figures, and allowing them to manage [the church’s] affairs and make their own decisions.”

He said the PA “should make a strict decision stating that every Christian endowment should be under the PA’s authority, and no spiritual leader, whatever their sect, can use any property without the approval of the PA and in compliance with the interest of the Palestinian Arab members of the sect and church.”

But the PA opposes the “Arabization” of the church and sees it an issue tied to national independence. The PA believes Israel’s classification of Palestinian land as “disputed territories” would encourage it to seize more church lands if Arabs were appointed to replace Greek clergy.

The PA does, however, advocate the appointment of Arab members to high ranks in the church. Omeira said, “The PA objects to any schism within the Orthodox patriarchate and is working on opening dialogue channels between the church and its opponents to reach a solution amenable to all.”

Hanna Issa, a professor of international law and the head of the Islamic-Christian Committee, told Al-Monitor, “Confiscating church endowments in Palestine is illegal, as per international laws that forbid land confiscation in occupied territories like Palestine. But Israel is disregarding these laws and continues to take over lands and displace Christians and Muslims.”

Issa added, “These lands are Palestine’s, and they should not be sold without the approval of the PA.”