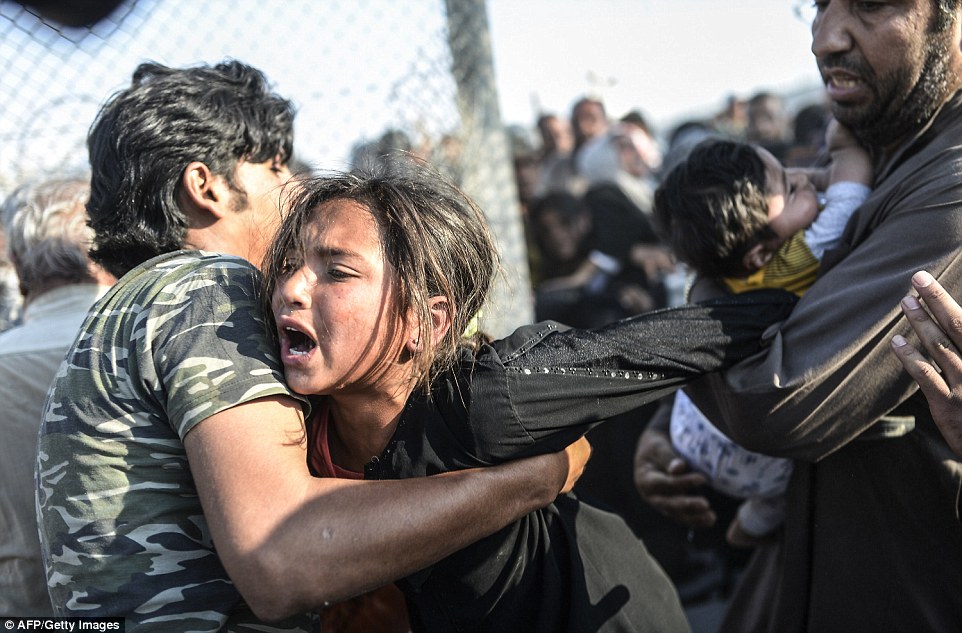 Syrian refugees attempt to break through a barbed wire fence in a desperate bid to flee from the ISIS-held border town of Tal Abyad and cross into Turkey. Photo Credit: AFP/Getty Images

A Syrian Christian woman killed by Muslim extremists because she refused to renounce her faith has been described as a “martyr” by Pope Francis. According to ABC News, the 79-year-old pontiff spoke to the young woman’s widower during a recent visit to the Greek island of Lesbos, who told him the heartbreaking story.

“He is Muslim, and he told me that he married a Christian girl,” Francis explained. “They loved each other and respected each other. But unfortunately the young woman’s throat was slashed by terrorists because she didn’t want to deny Christ and abandon her faith.”

The leader of the Roman Catholic Church then referred to the woman as a “martyr” for remaining strong in her faith despite overwhelming persecution.

Since 2014, Christians and members of other religious groups in Iraq and Syria have been killed, tortured, raped and driven out of their homes by the terrorist group. The group has also taken hundreds of Christian women and girls as sex slaves and forced children into battle, according to US researchers.

Mark Arabo, president of the California-based Minority Humanitarian Foundation, expressed hope that the designation will raise international consciousness and morally compel lawmakers to pass legislation protecting Christians and other minorities.

More than 1.1 million people have crossed clandestinely from Turkey to Greece since the start of 2015, and hundreds have drowned en route, notes The Guardian.

Francis, who visited the refugee island to show solidarity with the millions of refugees fleeing terrorism and war that are seeking passage to Europe, told reporters that his visit was “a voyage marked by sadness, a sad voyage.”

[the refugees] were children. Some of them, these children, have witnessed the deaths of parents and companions,” while many others drowned at sea.

“I saw so much sorrow…I saw much suffering,” he said, the Catholic News Agency reported

The Guardian adds that the Pope recently decided to take three families of Syrian Muslim refugees, including six children, on board his papal plane back to Rome. The families all lost their homes in the bombings in the Syrian civil war.

“Though many of their graves bear no name, to you each one is known, loved and cherished,” Francis said in a prayer. “Wake us from the slumber of indifference, open our eyes to their suffering and free us from the insensitivity born of world comfort and self-centeredness.”

The pontiff said that though his gesture was “a drop in the ocean” he hoped “the ocean will never be the same again”.

“All refugees are children of God,” he said.