And the Pope said: “I want these drawings on my desk”

Previous Next
And the Pope said: “I want these drawings on my desk” 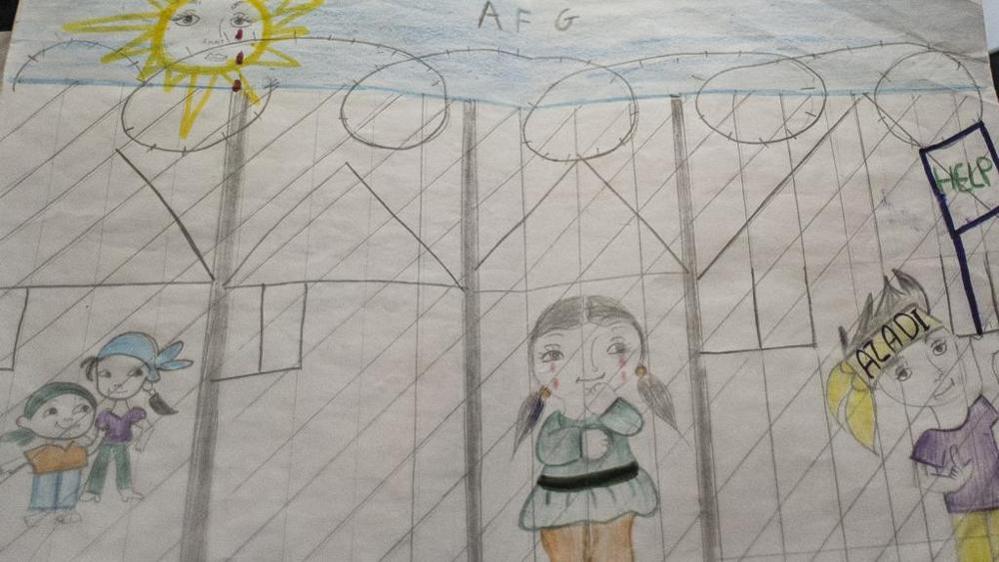 One of the drawings Francis received Saturday from children at Moria refugee camp on Lesbos (photo by: Francesco Sforza/L’Osservatore Romano)

“We greeted around 300 of these refugees, one by one. Many of them were children; some of them – of these children – watched their parents and friends die, some of whom drowned in the sea. I saw so much pain!” Pope Francis looked up from his prepared speech at the end of the Sunday prayer. He could still picture the faces, tears and desperation that he had witnessed 24 hours before, at the refugee camp in Moria, on the Greek island of Lesbos. Pope Francis told the crowd of faithful gathered in St. Peter’s Square, the story of a young male widower: “I want to tell you about a young man who has not yet turned 40. I met him and his two children yesterday. He is Muslim, and he told me that he married a Christian girl. They loved each other and respected each other. But unfortunately the young woman’s throat was slashed by terrorists because she didn’t want to deny Christ and abandon her faith. She is a martyr! And that man wept and wept…” This is the man who sobbed at Francis’ feet along with his two children.

Of all the encounters Francis had at the refugee centre which he visited with Patriarch Bartholomew and Archbishop Ieronymos on Saturday, the ones that struck Francis the most were those with the children there. Children who are now alone in the world, who lived under the bombs and are too scared to sleep at night. Children who wished to turn their experiences, suffering and hopes into drawings.

Beneath the white tent in Moria, a little boy in a white and blue vest held out a piece of paper with a drawing of some peers standing behind a barbed wire fence, which he wanted to give to Francis. “Is this for me? Did you draw it? And which one is you?” the Pope said with the help of an interpreter. Azadi, the child, pointed to the person in the drawing that represented him. In the drawing he was wearing a bandana around his head and a flag with the word “help” written on it. “This is me with my friends from the camp,” he explained. His father was by his side. He took Francis’ hand and said: “It’s great that you’re here.”

Another little boy who was standing nearby, wearing a blue tracksuit, also gave the Pope a drawing: His picture showed a sun shedding blood coloured tears as adults and children drowned in the sea. Pope Francis looked at him, shocked. “This drawing is symbolic,” he told Patriarch Bartholomew. He thanked the boy and passed the sheet of paper to one of his assistants saying: “Don’t lose this! I want it on my desk.”

The drawings which we publish here were not lost.