Patriarch in Rome: “the exodus of Christians is a bleeding which deprives the Church of Jerusalem of its best elements”

Previous Next
Patriarch in Rome: “the exodus of Christians is a bleeding which deprives the Church of Jerusalem of its best elements”

ROME – On Thursday, April 14, 2016, at a conference at the Pontifical University of the Holy Cross in Rome, His Beatitude Fouad Twal, Latin Patriarch of Jerusalem, spoke to over 400 people on the situation of Christians in the Holy Land and the many challenges they face in Palestine and Israel.

The Patriarch referred to the historical origins of the first Christian community, the Church of Jerusalem, composed of “Ecclesia ex circumcision” (Judeo-Christians), and “Ecclesia ex gentibus” (Greeks, Romans, Syrians, Canaanites, Phoenicians, Philistines, Nabateans, Moabites, Ammonites, etc.). The Church of Jerusalem has witnessed many regimes, Arab, Crusader, Mamluk, Ottoman and English, and today the ancient Holy Land is divided into three countries, Palestine, Jordan and Israel, three regions which, together with Cyprus, form “the Diocese of Jerusalem” under the jurisdiction of the Patriarchate. Holy Land Christians are a small minority, less than 2% of the population, noted the Patriarch, lamenting the decline of the Christian presence in Jerusalem, which accounted for a quarter of the population in 1948, at the creation of the State of Israel, compared to only 1.97% of the total population today. But the vocation of Christians, although a minority, is not least in importance, stressed the Patriarch: “Christians who live between two majorities, Jews and Muslims, are the “little flock” of which speaks the Gospel, and are called to be a bridge between the two religions, two cultures, two civilizations, but also two political sides.” He referred to the many challenges facing the Christian community because of the Israeli-Palestinian conflict, “the military occupation, the daily humiliations, the violence of both sides, the “knives intifada” and the rise of religious fanaticism, Jewish as well as Muslim.” The conflict is painfully highlighted by “a wall of separation of about 8 meters high and in length more than 700 km.” The Patriarch expressed his concern about “the exodus of Christians”, which mainly involves young people and intellectuals in search of a better life and future; it is “a bleeding, which deprives the Church Jerusalem of its best elements.”

The Holy Land Christians, who have a history, a language and a common culture with Muslims with whom they have lived for centuries, “play a positive role in Arab society and facilitate relations between the different social components.” The Patriarch stressed the important mission of Christian Schools in Palestine, one of the Middle East countries with the highest rate of illiteracy. Some educational practices, however, are not always understood by Muslims, notes, the Patriarch, including “the theology of mercy, forgiveness, and the work of the purification of memory”,something they find difficult to interpret in the context of the conflict.

Patriarch Twal also spoke about the agreement signed on June 26, 2015 between the Holy See and the State of Palestine, the impact of which has been “very positive” in the Arab and Muslim world. The agreement, calling for a “just and lasting peace”, employed, for the first time, the title “State of Palestine” in the official document signed by both parties; it was, however, less warmly received on Israeli side. “In response, Israel ordered the construction of a new section of the separation wall in the Cremisan valley, an unjust and foolish project”. Two months prior to the signed agreement, in April 2015, the Israeli Supreme Court had shown a step back, saying that this wall “is not necessary to the security of Israel.”

After explaining the situation of Christians in Palestine, the Patriarch addressed the issue of Christians living in Israel. “The Jews are those from whom God has not withdrawn their election in Abraham” explained Patriarch, referring to the Letter of Saint Paul to the Romans (11: 1-11). “It is, however, an election that is not exclusive, but one that includes all peoples. The Christian community has a duty to help Jews discover their vocation to universality.” The Christian community in Israel is mainly represented by migrants that come mostly from the Philippines, various countries of Africa or regions of India, who send their children to Israeli schools and who speak Hebrew, “sometimes at the risk of losing their Christian roots because,stressed the Patriarch, “Israel, even if it proclaims itself a democratic and secular state, still behaves towards them as a theocratic state by Jewish law.” HB then addressed the limitations of the basic agreement signed between Israel and the Holy See in 1993. Citing precisely Articles 1, 3, 4, 10 and 11, he pointed out the stumbling blocks to the agreement still under negotiation: religious freedom for all Palestinian Christians who cannot visit the holy sites without first seeking a “permit from the Israeli military authorities,” the“humiliation of the checkpoints,” “the drastic reduction in subsidies from the state of Israel to Christian schools, subsidized up to 29% compared to 100% for the Israeli religious schools”, and “respect for the status quo in the holy places”. “The fanaticism of criminal acts perpetrated by fundamentalists in recent times in Tabgha, Beit Gemal, the Dormition Church, and others, too often go unpunished, said the Patriarch, despite the presence of more moderate people in Israel, and people working for dialogue and justice for the sake of peace.”

“The search for security is becoming an obsession, a myth in the name of which all the injustices and all immediate use of violence is justified,”observed the Patriarch, lamenting the fact that Israel has “never respected the numerous international resolutions on the conflict, settlements and borders… nor the Holy See, and the international community, calling for “a two-state solution, with clear and secure borders.”

The Christians of the Holy Land, His Beatitude finally concluded, are “living witnesses of the history of salvation…Thanks to them, the holy places are not reduced to mere archaeological sites.” Ecumenical and interreligious, the Holy Land has a universal vocation, and Christians play a “bridging role between East and West.”

Because the hope of the Mother Church of Jerusalem is not in vain, the Patriarch concluded: “One day, political leaders, the Israelis and Palestinians and the international community will come to understand that, beyond the game of interests and political ambitions, the nature and vocation of this holy land,

[is to be] chosen by God to unite all men to himself and to each other.” 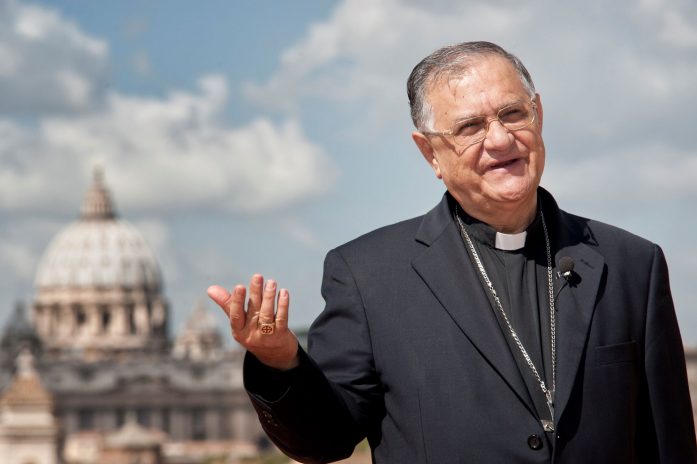 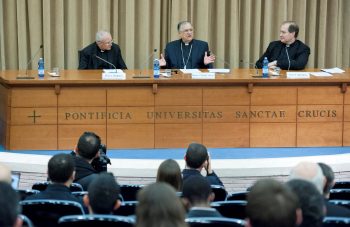 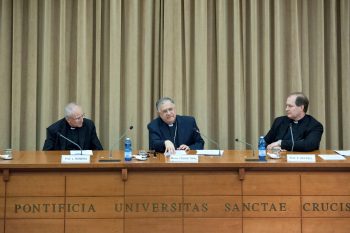 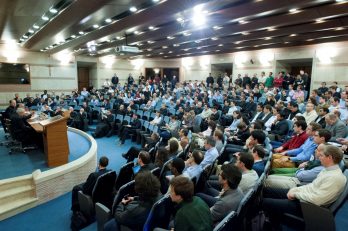 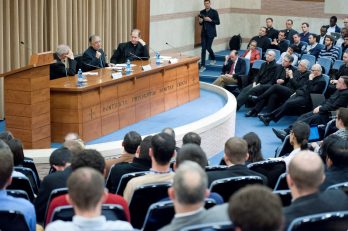 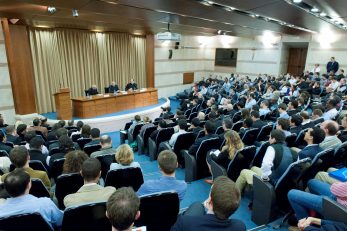