Construction of Separation wall at Cremisan: “It is our history which they snatch from us to erase it”

Previous Next
Construction of Separation wall at Cremisan: “It is our history which they snatch from us to erase it”

PALESTINE – April 2016. While the bulldozers are busy in the Cremisan Valley and Beir Onah uprooting ancient olive trees to position the concrete sections of the separation wall, there was the opportunity to have on-site meetings with the Parish Priest of Beit Jala, Father Aktham Hijazin, and Issa al-Shatleh, a Christian landowner, to discuss the confiscation of his lands.

The Cremisan case was somewhat of an unforeseen development. This beautiful valley of olive trees, located between Bethlehem and Jerusalem, belonging to the municipality of Beit Jala, mainly inhabited by Christians, suffered a first round of land confiscations after 1967 for the construction of the settlement of Gilo. Since then, the town Beit Jala has diminished alarmingly. Israeli construction has multiplied in this region that is still classified “Area C” by the Oslo Accords, that is to say intended to “be gradually transferred to Palestinian jurisdiction.” The Palestinians are still waiting.

The separation wall in Cremisan “an old project”

“The construction of the wall and the expropriation of this valley is an old project,” says Father Aktham, Pastor of Beit Jala: “A section of road had already been built there nine years ago. At the time, 13 dunums* were confiscated from us. We fought all these years.” In April 2015, the Israeli Supreme Court appeared to have vindicated the Christian families, defended by the Society of St. Yves, a Catholic Centre for Human Rights of the Latin Patriarchate. The two Salesians monasteries of the valley would remain on the Palestinian side, but the fate reserved for the land remained unclear. Issa al-Shatleh, a Beit Jala Christian, who already had a part of his land expropriated in 2004, admits he did not expect “very much” of the Israeli Supreme Court: “We know that the Court still legislates for the occupation. We relied more on international pressure, and we are grateful to those who mobilized, but the pressure was insufficient, otherwise we would not be here talking.”

On Monday, July 6, 2015, the Israeli Supreme Court backtracked. It finally gave the green light to the Ministry of the Israeli Army to begin construction of the separation wall in the valley. In the sweltering heat of August 2015, work began. An operation conducted with impunity by Israeli forces, heedless of the borders established by international justice.

“This is clearly a reaction by Israel following the agreement between the Vatican and the State of Palestine signed in June 2015,” said Father Aktham.“The new route is even worse. Both monasteries will be annexed to Jerusalem and even more land will be confiscated. They started to build “for security reasons”, they say. We know that the Israeli plan is actually to annex land to Jerusalem and to connect by road the settlements of Gilo and Har Gilo to expand them. “

One morning in August, Issa was called by the devastated inhabitants of the valley, awakened by the bulldozers. He went hastily on his land with his brother and tried in vain to explain to the soldiers that this land and these trees belong to him and to his family for generations. He asked one of the officers present for an official court document. No justification was presented. He fought, and he and his brother were sent home. Father Aktham, meanwhile, was violently grabbed at the neck by a soldier before being removed from the construction site.

Did you receive a notice of the Court or the Army? Have you been consulted? “Walla ichi.” Nothing at all ! Issa recalls with nostalgia the flourishing Beit Jala of his childhood. “Today, the city is not what it was. It almost looks like it is abandoned.”

There were thirty olive trees that belonged to Issa and his brothers (in all, 6 families of 25 persons) on a surface of 4.5 dunums, of which there remains no more than one at the foot of the wall, and to that part he will never again have access. “These trees need to be maintained with the greatest care” he laments. “They even stole from us the earth, the fertile soil, of a special fertility in this place”. Issa tells how the crop of olives allowed the family to produce about fifteen barrels of oil every year, which averaged 270 liters.“Certain trees, from the time of Christ, were so big that they required two days of harvesting. All in all, we harvested olives during a period of a dozen days. Today, we have nothing else and, on top of that, we must buy some oil”.

For Father Aktham, as for Christians of this valley, it is more than uprooted trees or seized lands that are taken from us. “It is our history that is confiscated to make it disappear, to erase it. Our olive trees, most of which are thousands of years, are uprooted and replanted elsewhere, often in settlements, as if to say “we are here for a long time.” Among the olive trees, archaeological treasures, including Roman and Byzantine tombs, were destroyed.”

The legal battle is over. All remedies seem exhausted. Once again, the use of violence will become law on this holy land. What hope is there now for these Christians? With a lump in his throat, Issa cannot answer that question. “This land, the land where the Messiah was born, must be the land of peace. Each generation plants hopes in the next generation. Now we have nothing more to offer our children. The flame of our hope is progressively shutting down. Snatching our land, they take from us peace, hope, and livelihood. These confiscations are killing the future of our young people here in Beit Jala, and have forever changed the course of our history. It has stolen our history, our heritage and our future.”

What is the future for todays’ Christians?

“Beit Jala is encircled by walls and settlements, it has no future because it cannot expand” says Father Aktham. “Of the 14,500 dunums belonging to the municipality prior to 1967, more than 3300 are in Area A, which is to say, under Palestinian control, 7700 dunums were confiscated by wall construction, all of which makes up more than half. Furthermore, some 3000 dunums were used for the construction of the new Palestinian city of Doha. The rest, about 1,200 dunums, is in Area C, which is Palestinian rural and agricultural lands under Israeli control – on which Israel refuses to issue any building permits.”

Father Aktham and Issa comment again, not without emotion, on the vicissitudes of the long battle. “At first, says the priest, we organized many peaceful demonstrations, prayers, masses every Friday and every Sunday, then every day, as the work intensified. There were large demonstrations in Beir Onah, but each time they were brutally repressed by Israeli soldiers. Many people, including women and children, have been tear gassed and were left in serious suffocating condition. The soldiers climbed on the roofs of houses in the valley, and people were afraid. Some popular or political parties more extreme also began to demonstrate using force. We decided that we should stop demonstrating.”

In Beir Onah, Issa and Father Aktham watched the bulldozers working. Above our heads and from the wall, a gigantic bridge connects the settlements of Gilo and Har Gilo. “They – the Israelis – are on our land, the tunnel under our land and the bridge over our land with…Also there is supposed to be an “agricultural” door to let the farmers access the olive trees. But when? And at what time? They do not even want to know who the owners of the land are, and they refuse to listen. I’m afraid that door remains closed.” Issa shows the other side of the barbed wire, the only remaining olive tree and which is destined to die because he cannot give it the necessary care. At the foot of the wall, a building still under construction houses a Christian family. Angel Abu Sa’ad was born in 1960, her father bought the land in 1935. Before, their home overlooked the lush valley. “Our children were playing here, now we have concrete walls under our windows. Children can barely get out on the piece of road we have left. There are cars driving past, and we are afraid of the soldiers who monitor the wall construction site.”

After Cremisan and Beir Onah, Father Aktham and Issa lead us up the Makhrour Valley, also threatened. Al-Makhrour, strategically located, could be confiscated in turn to connect to the settlements of Gush Etzion and Har Gilo.

*The dunum was the Ottoman unit of area, representing the amount of land that could be ploughed by a team of oxen in a day. Its actual area varied considerably from place to place, from almost 1000 m² in Palestine and Israel to around 2500 m² in Iraq. 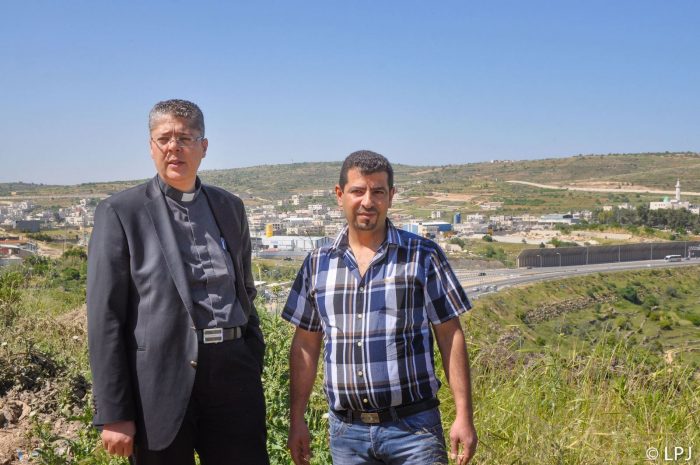 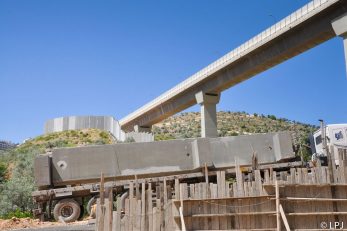 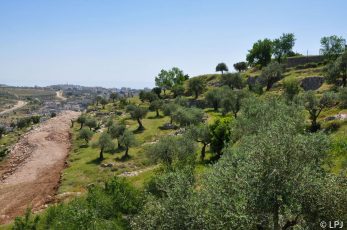 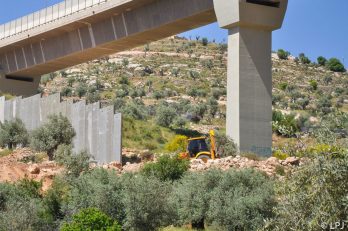 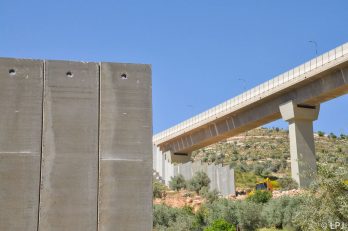 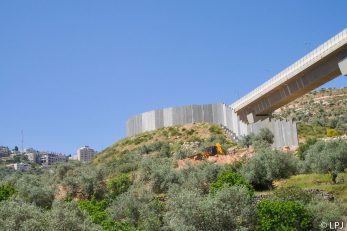 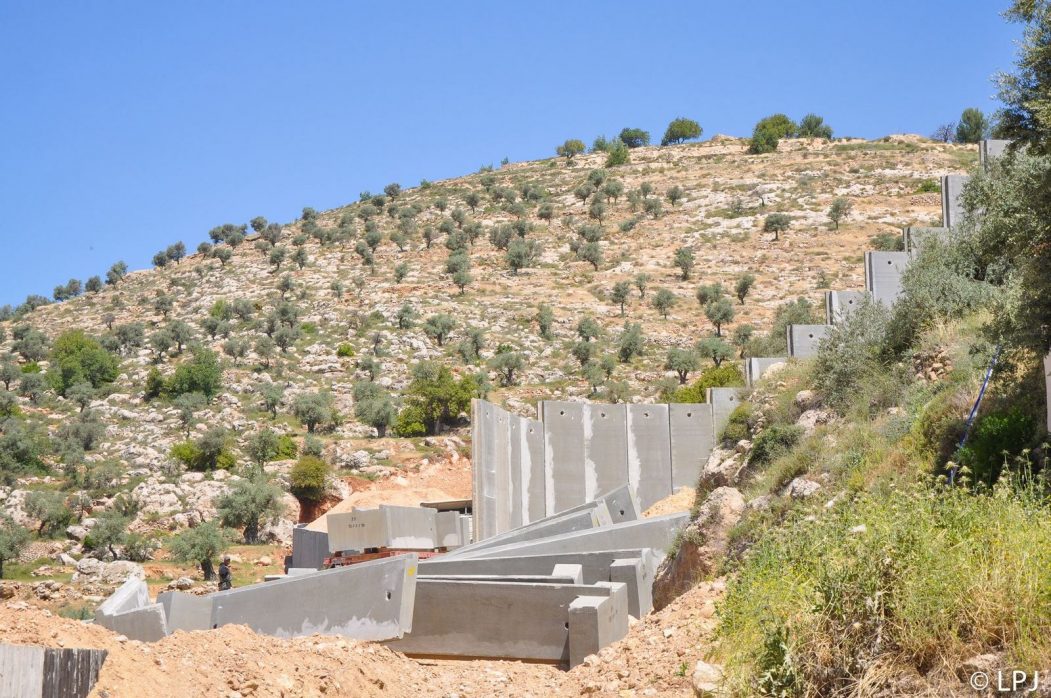