Chaldean priest asks why U.S. can’t find ISIS when it can find water on Mars

Previous Next
Chaldean priest asks why U.S. can’t find ISIS when it can find water on Mars

A Chaldean priest, who runs a displacement center in Ainkawa in the autonomous region of Iraqi Kurdistan, has blamed the United States government for not exerting enough effort to quash the Islamic State terror group. 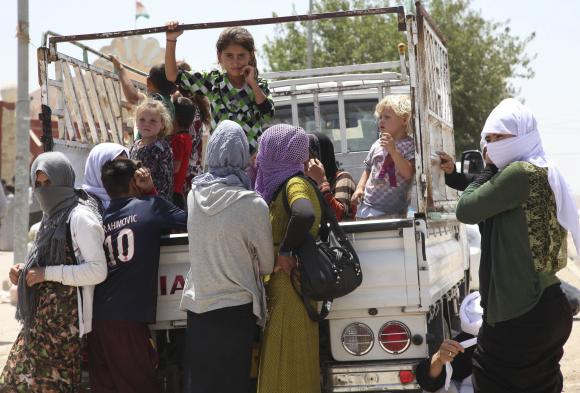 Displaced families from the minority Yazidi sect, fleeing the violence in the Iraqi town of Sinjarl west of Mosul, arrive at Dohuk province, August 4, 2014. REUTERS/Ari Jala

Speaking in Washington, D.C. on Tuesday to raise awareness regarding the plight of thousands of Christians and other civilians in war-torn Iraq, Father Douglas al-Bazi said that the U.S. only moved against IS when the terrorists made their way into the Kurdish town of Erbil. This was after Mosul and other Christian and Yazidi towns in Northern Iraq have already been conquered in 2014.

[It wasn’t until then] when the Americans started bombing the Islamic State,” he said, as quoted by The Christian Post. “So the Yazidis and Christians, they ask why America just helped those people and they forget about us? Also another group called Shabak, they had the same feeling.”

The feeling of despair was exacerbated when, in September 2015, the world celebrated the discovery of water on Mars by the National Aeronautics and Space Administration, while the people in Iraq were displaced, homeless, and suffering.

The U.S. State Department already recognized in March that the acts of the Islamic State is genocide. This, according to the Chaldean priest, is the first time that the U.S. showed they care, but he said that caring means so much more than just words, “it means taking action for my people.”

According to the report, a source said that Christians and other religious minorities are unlikely to receive much help because foreign government aid — except for those that are given to churches that help Christian refugees directly — goes through the Iraqi government. Moreover, Christian refugees try not to register with the United Nations for fear of being targeted by Muslims, and this diminishes their chances of being resettled in the U.S., which relies much on the U.N. registry.

Bazi also said that the 2005 Iraqi Constitution needs to be changed because while the first part speaks of democracy, the second says that one “cannot have any law against Shariah and Quran.”

The Chaldean priest, who was held hostage in 2006 and suffered torture in the hands of terrorists, now runs Mas Elias Church.