Patriarch Fouad Twal: “the Church of Jerusalem was born of the outpouring of the Holy Spirit!”

Previous Next
Patriarch Fouad Twal: “the Church of Jerusalem was born of the outpouring of the Holy Spirit!”

JERUSALEM – Sunday, May 15, 2016, the Latin Patriarch of Jerusalem, Fouad Twal, presided over the solemn Mass of Pentecost in the presence of many of the faithful, in the Benedictine Abbey of the Dormition, a few meters from the Cenacle on Mount Zion.

A few meters from the Upper Room where Christ celebrated the Last Supper and where the apostles received the outpouring of the Holy Spirit on the day of Pentecost, stands the Dormition Abbey that recalls the memory of the Assumption of the Virgin Mary into Heaven. It is here, close to the Cenacle, according to tradition, the Jerusalem Church celebrates the Mass of Pentecost. However, the Upper Room, the first Franciscan convent of Holy Land has in effect been closed to Christian worship since 1523, the date of the expulsion of the Franciscans by the Ottomans. The Franciscans have the right to celebrate two offices per year: the rite of the washing of the feet on Holy Thursday and the second Vespers of Pentecost, celebrated yesterday evening.

In the Benedictine Dormition Abbey, situated not far away, the Patriarch surrounded by many priests, religious, faithful and pilgrims, recalled occasion of the outpouring of the Holy Spirit as “the time of birth of the Church.” “The Church, stressed Patriarch in his homily, as one human family, is born from the outpouring of the Spirit, the infinite mercy of God.”

Given the difficulties faced by Christians in the Middle East, Patriarch Twal urged the faithful to keep faith and not give in to discouragement. Two years earlier, he recalled, the “Invocation for Peace”, organized at the initiative of Pope Francis in the Vatican Gardens with Presidents Abbas and Peres, took place on the Solemnity of Pentecost. At the end of the Invocation, the Pope and the two Presidents planted an olive tree together. “It was a beautiful dream … a little romantic” noted Patriarch adding: “Today, hundreds of ancient olive trees are uprooted in Cremisan and, faced with this endless spiral of violence and hatred that causes death and destruction, for what do we continue to hope?” Yet His Beatitude, invited the faithful to look beyond sad twists and turns in the news: “The olive tree planted in Rome, like grace in the hearts of human beings, continues to grow, slowly but surely in the shadow of the dome of St. Peter’s Basilica: a prophetic seed of a God who one day will transform all things in Him.”

Concluding his homily, Patriarch Twal shared his ‘hope’: “May the Mother Church receive and transmit God’s Mercy and become the breeding ground for a revival of a reconciliation between the peoples!”

During the Mass, two French young people received the sacrament of Confirmation from the hands of the Patriarch. The two girls had been prepared for the occasion by the Community of the Beatitudes located in Emmaus-Nicopolis.

At the end of the celebration, a shower of rose petals came to symbolize the descent of the Holy Spirit upon the faithful according to ancient tradition of the feast of Pentecost, also known as the “Easter of roses.” The vaults of some churches, like that of the Dormition in Jerusalem, still contain a hatch called “the passage of the Holy Spirit”, a specially designed opening for releasing petals or even doves, on the day of Pentecost. 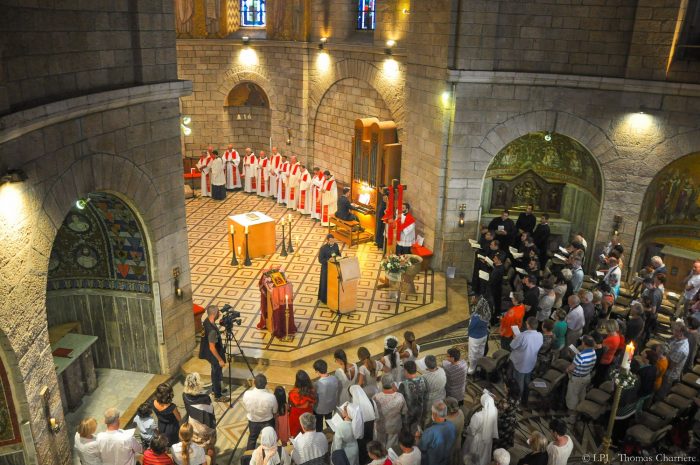 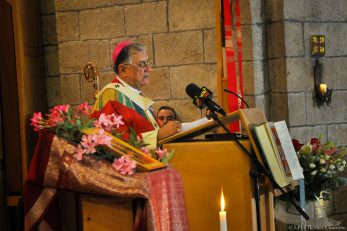 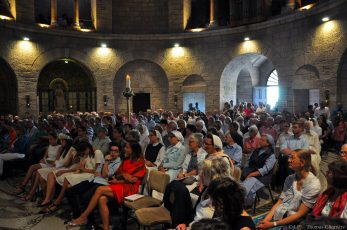 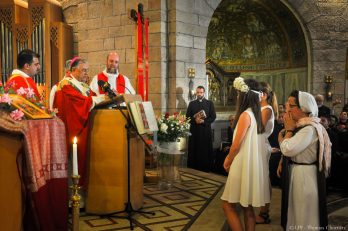 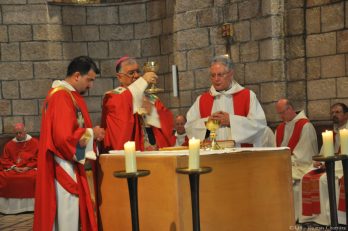 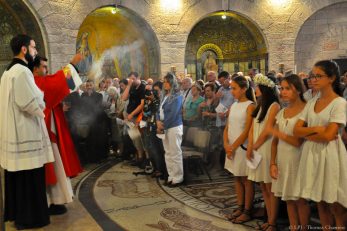 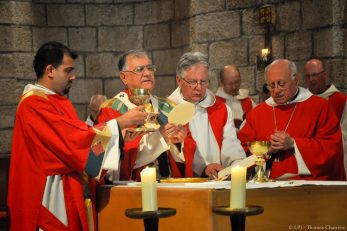 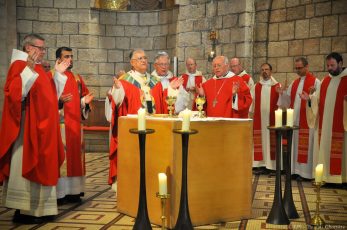 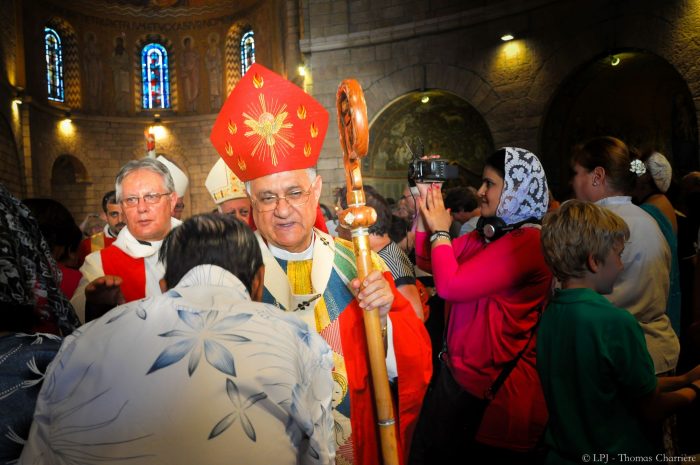 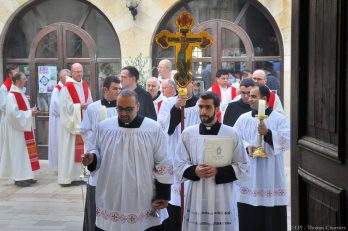 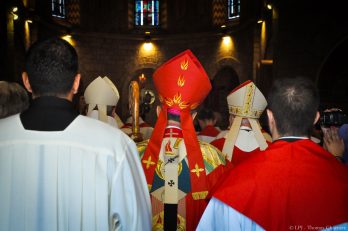 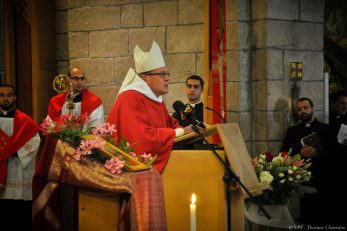