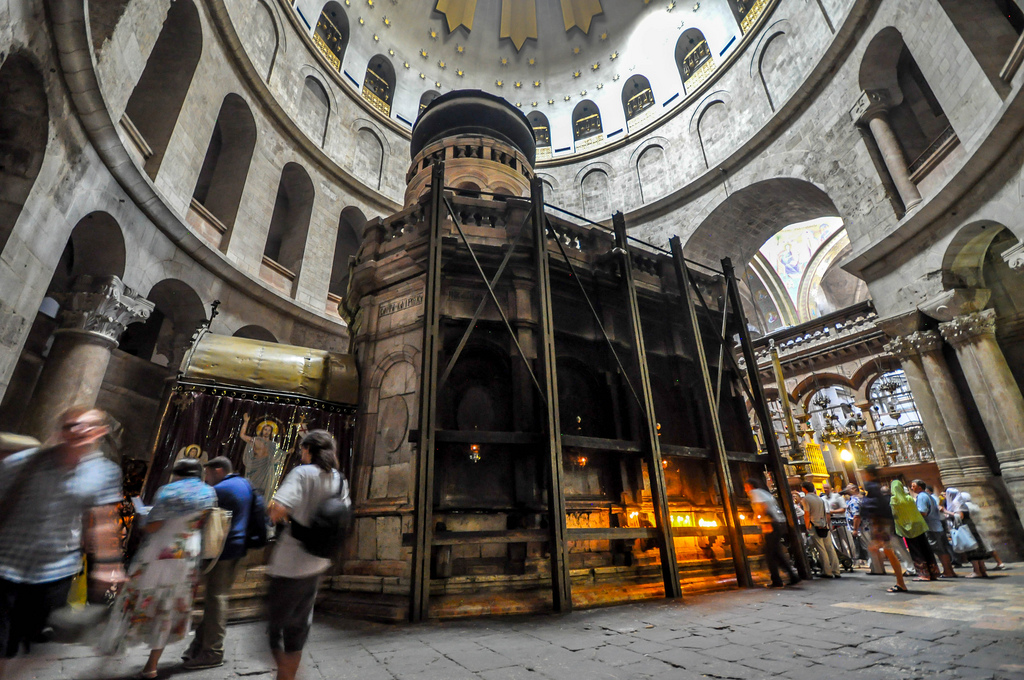 The Tomb of Jesus inside the Church of the Holy Sepulchre. AP Photo

Restoration work on the 206-year-old “Tomb of Jesus” at Jerusalem’s Holy Sepulchre Church began on Sunday despite an age-old rivalry between the three Christian communities responsible for the major holy site.

The Greek Orthodox, Roman Catholic and Armenian Orthodox churches have united to oversee the year-long, $3.4 million restoration project that will peel away layers from the tomb’s outer surface, cleaning and repairing them one by one. The shrine will have to be dismantled piece by piece and later rebuilt, with the project expected to be completed by early 2017.

“Broken or fragile parts will be replaced while marble slabs that can be preserved will be cleaned, and the structure supporting them will be reinforced,” AFP said.

According to Haaretz, the iconic site was “on the verge of collapse” as workers erected scaffolding and a steel canopy over the entrance to the tomb, officially starting work on the restoration project.

The 19th-century church was built on the site of the cave where Jesus is believed to have been crucified, buried and resurrected, and has long served as one of the holiest of sites for all of the Christianity, visited daily by thousands of pilgrims and tourists.

As earlier reported, the painstaking work has needed to be done for years, but strife between the three religious groups who control the tomb today has historically prevented any renovations.

The last attempted renovation began in the 1950s when the Jordanian authorities who controlled East Jerusalem at the time pushed Christian representatives into forming a technical bureau to address the 1927 quake damage. Unfortunately, the process broke down more than a decade later, according to Father Macora.

Then, in 2008, monks and priests brawled near the shrine, “throwing punches and pulling one another’s hair not far from the tomb where Christians believe Jesus was resurrected,” according to The Times.

One particular point of contention has been “centuries-old rules and minute traditions – called the status quo – that define the way Jerusalem’s holy sites are governed. According to this “status quo,” even the act of repairing a holy site can imply ownership.

However, in early 2015, the Israeli government temporarily barricaded the structure, claiming the shrine was unsafe and near collapse, finally prompting the three groups to put aside their differences and work together to come up with a renovation plan.

“The inspiration for this unity was the threat of losing the shrine altogether…The message was clear: Fix it, or else,” the New York Times noted.

Antonia Moropoulou, the conservation expert heading the project, said she hoped the long-awaited renovation would maintain the intangible spirit “of a living monument.”

“This tomb is the most alive place,” she told the Times. More so, she added, “than anything I have seen in my life…The greatest challenge is to preserve that.”

Meanwhile, King Abdullah of Jordan has confirmed that he will be donating an undisclosed sum to the project, earning the praise of Greek-Orthodox Patriarch of Jerusalem, Theophilos III.

“We are reaping the fruits of these efforts in this age when sectarian wars are burning entire countries as can plainly be seen,” Theopolis III said back then.

“His Majesty constantly reiterates that Jerusalem’s Muslim and Christian holy sites are a red line, which Jordan will not permit to be crossed. Also, that Jordan continues to uphold its religious and historic responsibilities toward the entirety of Al Haram Al Sharif with the utmost commitment and seriousness.”