HCEF President/CEO speaks at Roundtable on Religious Tourism in Lebanon

Beirut, Lebanon – The United Nations World Tourism Organization (UNWTO) and the Lebanon Ministry of Tourism invited Sir Rateb Rabie, KCHS, President and CEO of the Holy Land Christian Ecumenical Foundation (HCEF), to speak at a roundtable discussion on religious tourism this past weekend. The two-day conference entitled “Connecting people and cultures through Tourism in the Mediterranean Region,” took place on Sunday, May 29th through Monday, May 30th, 2016 in conjunction with the launching of “Our Lady of Mantara – Maghdouche” as an international religious tourism destination in Beirut, Lebanon.

Sir Rateb was invited to participate as a member of the Palestinian delegation due to HCEF’s 18 years of experience developing the bonds of solidarity between Arab Christians of the Holy Land and Christians worldwide through culture and pilgrimage. Through its Holy Land Tours, particularly the Living Stones Pilgrimages, the HCEF has used cultural and religious tourism to educate the West about the Holy Land and its peoples, specifically the Arab Christians who were amongst the first followers of Christ. Fostering these people-to-people interactions is what cultural tourism is all about. Yet HCEF takes it one step further, by focusing on pilgrimages and fostering pilgrim engagement with the region after their return.

The roundtable discussion was preceded by an opening session, in which Michel Pharaon, the Minister of Tourism of Lebanon, and Dr. Taleb Rifai, the Secretary-General of the UNWTO, shared opening remarks.

Participants of the Roundtable Discussion pose for a photograph alongside conference participants.

Her Excellency Rula Ma’ayah, Minister of Tourism and Antiquities of Palestine, began the discussion explaining the challenges and obstacles to tourism in the Holy Land. She identified these as the ongoing occupation and political unrest that make it difficult to plan for the long term and to develop the tourism industry. She concluded by stating that despite these obstacles and challenges, the tourism industry continues to grow in Palestine and has great potential to bring prosperity to the country and to its population.

In his remarks, Sir Rateb explained that when it comes to tourism in the Holy Land, religion plays a large role due to the fact that visiting the holy sites is one of the major draws of visiting Palestine. He stressed that pilgrimages differ from religious tourism in that they are undertaken as a journey to encounter the divine; they are a genuine exercise in prayer, and as such require a different approach. He also stressed the important role pilgrimages play in advocating and promoting peace in the Holy Land.

Sir Rateb proposed an integrated approach with connects all of the key players: pilgrims, local churches, travel agencies, and the governments of the destination countries, for a more synchronized approach to promoting tourism to Palestine.

Sir Rateb also recommended greater cooperation across the Levant in developing inter-country tourism packages. After all, the Holy Land extends past the geographical region where Jesus Christ carried out his ministry. It extends to all the places the Holy Family walked and visited. Thus the countries across the Levant boast a plethora of holy sites, many of which go unnoticed by potential visitors. Sir Rateb expressed that greater coordination between these countries to package the sites as one would rectify this problem. 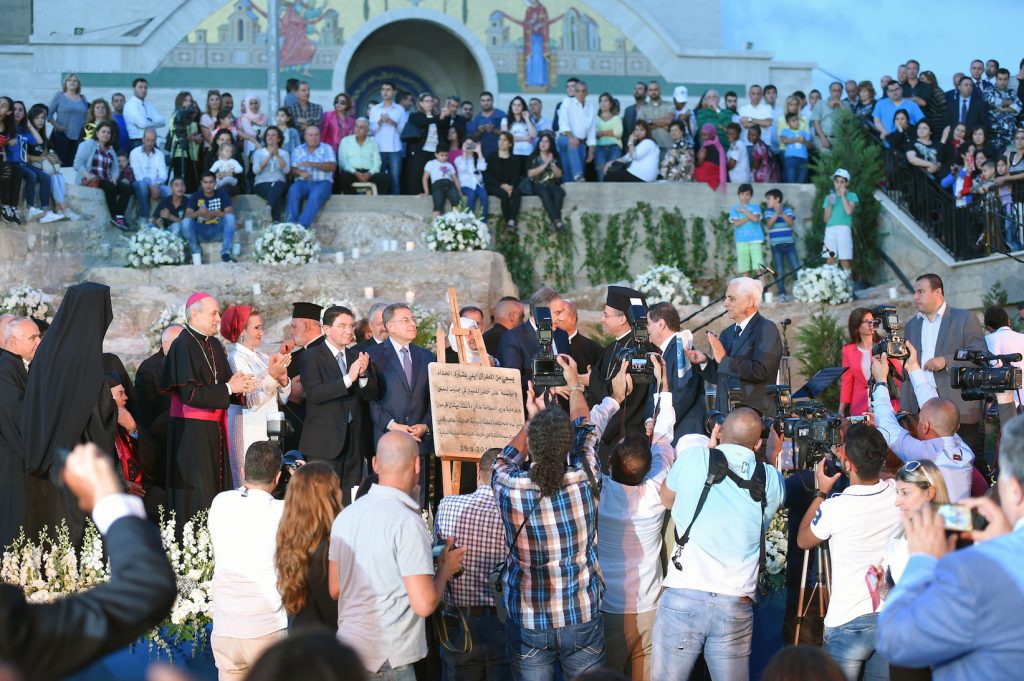 Crowds gather to commemorate the official recognition of “Our Lady of Mantara- Maghdouche” as an international religious tourism destination.

The roundtable discussion and debate was followed by launching “Our Lady of Mantara – Maghdouche” as an international religious tourism destination.  Our Lady of Mantara, or Our Lady of Awaiting, is the name of a shrine dedicated to the Virgin Mary. The shrine is built on the site where she rested and waited for her son Jesus Christ to finish preaching in Sidon. The shrine is under the care of the Melkite Greek Catholic Church.

The following day, the Working Group on the Phoenicians’ Route Cultural Tourism Program met for the second time, this time they met at Le Pavillon Royal, BIEL, Beirut. Their meeting considered a proposed roadmap and action plan for the development and promotion of a Cultural Tourism Programme along the Phoenicians’ Route, as well as the type of partnerships required for their implementation.

The two-day conference concluded with a closing ceremony in which Michel Pharaon and Dr. Taleb Rifai shared closing remarks.