Not Much Has Changed 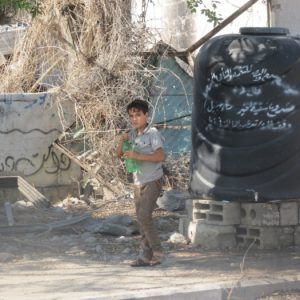 Al-Shijai’a neighborhood in Gaza City in 2014.

As with every previous visit to Gaza, this visit carried a lot of mixed feelings which takes some time to process and make sense of the very complicated situation. This particular visit coincided with the second anniversary of the 2014 war which lasted for 51 days, at the end of which and after unprecedented loss of life and massive destruction, both Israel and Hamas declared victory! Two years later, and with no real change on the ground, I am not sure how Hamas can claim victory as none of their stated ‘objectives’: ending the blockade, establishing a seaport and an airport, creating new economic development opportunities or opening the borders to the outside world, were actually achieved. As far as Israel is concerned, again, none of the ‘objectives’ of destroying Hamas and ending the security threat, were achieved either. Both sides, in my humble opinion, are not working for the benefit of their people in finding ways to move forward peacefully and relieve the suffering of ordinary citizens. Only a negotiated peace agreement will bring the much needed justice for Palestinians and Israelis. What is also clear is that reconciliation between the various Palestinian factions does not seem any closer, nor with the current Israeli right-wing government and the possibility of peace negotiations based on international legitimacy. Thus, the political outlook seems to foster a continuation of the current status quo with no real change in sight. 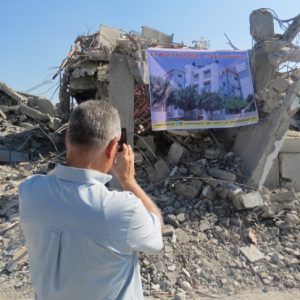 Al-Wafa Rehabilitation Hospital still in ruins with no plans for reconstruction.

In preparation for my visit, I went back and re-read some earlier updates I wrote in 2014 immediately after the war, where troubling statistics clearly indicated a desperate situation. Since then, no major changes have occurred and many sectors are worse off today than at any time in the past. The health sector in particular continues to suffer immensely. A recent report by the United Nations Office for the Coordination of Humanitarian Affairs (OCHA) paints a very gloomy picture about the very slow pace of reconstruction of health facilities that were either completely or partially destroyed during the war, but also highlights the growing burden on Gaza’s healthcare system. The report states “As of June 2016, Shifa hospital – the largest in Gaza – had 3,839 registered patients waiting for scheduled operations: 60 percent are classified as major surgeries of long duration, 35 percent moderate, and 5 percent minor surgeries. Surgical appointments are being scheduled as far away as 2018”. This indeed is a very sad state of affairs, and is very much indicative about the progress in other sectors. Unemployment remains at about 45 percent and is currently the highest in the world! 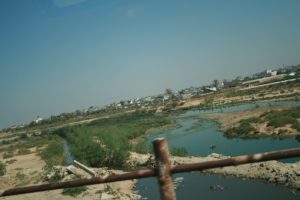 Sewage overflow in Gaza in 2010. Efforts to improve the water and sewage networks are stalled.

Further, there does not appear to be any major reconstruction for the thousands of homes that were destroyed during the war nor any real investment in business development. There is no real work on any major infrastructure projects for water and sewage networks as the smell of raw sewage was evident almost everywhere we traveled. The chronic problem of daily electrical outages continues on a maximum of 8 hour supply that rotates between neighborhoods. Electric generators of various sizes and shapes are a common scene at almost every street corner. Not only are they very expensive to operate, but the noise level they generate is polluting! Given the closure of the tunnel business between Gaza and Egypt, all supplies that arrive in Gaza’s market come from Israel at Israeli prices -well beyond the means of ordinary citizens. It was also noticeable that there is no shortage of fuel, and thus no lines at gas stations, as fuel is supplied from Israel at Israeli prices. There are however, a number of new cars on the streets as Israel relaxed the entry of new and used cars (less than 3 years old). Thus, for all practical purposes, not much has changed since the last war, and if it has in some sectors, it is certainly to the worse.

Some Encouraging News
One of the purposes of this trip was to visit with our partners to express our solidarity for continued support towards Gaza’s population and to get an update on existing projects. Despite the miserable outlook for Gaza, it was refreshing and amazing to hear the directors of the various institutions sharing their plans. Here is a brief summary:

The Overriding Concern – Accusations towards International NGO’s
In recent weeks, there has been accusations by the Israeli government directed to at least three international organizations operating in Gaza, specifically World Vision, United Nations Development Program (UNDP) and Save the Children. For the most part, the accusations appear to be very much exaggerated, especially those directed towards World Vision. It is regretful that such accusations are made and very much publicized in the media, before any evidence is shared and the chance to respond. Thus, it appears that much of the accusations are politically motivated. Having said that, I felt that we have a responsibility to discuss such issues with our partners in Gaza; we candidly discussed the allegations and reviewed existing policies, procedures, structures, hierarchy and decision making, roles, and practices that are applicable at the institutions to ensure that there are sufficient internal controls and safeguards that guarantee donor funds are utilized effectively and efficiently and at all times for the purposes designated.

Though I was a bit embarrassed to go through the exercise with partners whom we have worked with for a long time and whom we are confident of their work, it was a necessary part of the visit since we have a responsibility to our back donors to ensure the safety of their funds. In many ways, I am very glad that we went through the exercise since it reconfirmed that all our partners in Gaza have sufficient internal controls. In addition, all are institutions subject to annual external financial audits by reputable auditing firms, and many of their programs undergo periodic external evaluations. Besides, all the projects and programs funded by CNEWA-PMP undergo regular monitoring and evaluation visits by our projects assistant in Gaza which is an added safety layer.

I left Gaza not only proud of our work there, but re-assured of the quality of the work, and of the seriousness within which our partners handle their programs and financial administration. One of the directors emphasized to me that they are very conscious about the seriousness of this particular issue and they will continue to implement the work with the highest standards given that the first who will be affected should there be any wrongdoing would be the institutions of Gaza themselves. “We will be the first to pay a very heavy price should there be any wrongdoing and thus you should be assured of our endless commitment to our donors” were his exact words. 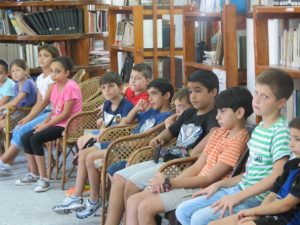 Children participating in the Creative Learning Program at the YMCA – Gaza which encourages reading and writing. More support is needed to help Gaza’s future generations.

Despite the very difficult situation in Gaza, and despite the fact that there are no real positive developments in the horizon in the near future, Gaza continues to inspire so many of us. Our people there are optimistic despite all the odds, have aspirations and ambitions, and plans for the future. One truly gets recharged from the positive energy of Gaza. They live on so little, and yet they think big and have not given up hope. Our job is to learn from them and not to disappoint them.

Given the highly publicized allegations towards some international NGO’s it is quite easy to ride Gaza off. It is too risky and too problematic and some may actually call it quits on Gaza. That will be a real shame given that Gaza lives today on international support. Our job is to ensure that the funds are in safe hands and that there are sufficient ‘checks and balances’ to give us all that sense of safety and security. Now is the time to increase our support to our brave people in Gaza and not to be bullied. We have an obligation to support the weak and the poor. I hope you will agree with me on the need to continue to do what we can despite all the odds.