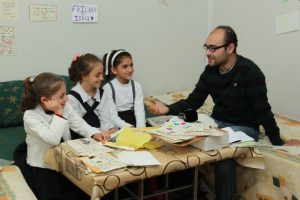 Myriam (centre), her sister and her best friend in Erbil, where they fled when ISIS took over Qaraqosh and Mosul. – SAT-7

The young Iraqi Christian girl who forgave ISIS after being forced to flee her home in Qaraqosh has said she can’t wait to return home now that the city is almost liberated.

Twelve-year-old Myriam told SAT-7 KIDS on October 21: “Surely I am happy and joyful to return home and see my friends who didn’t leave.

“I’ll get to see them again,” she added. “I’ll see my home and my country again, the place that I love.”

Myriam’s father, Waleed, said: “There are no words to express how we feel. But we say in Iraqi, Wenseh, which is the feeling we have when we are home. It doesn’t matter if [we are living] under destruction.”

The family are currently living in Ankawa, a suburb of Erbil, along with tens of thousands of other displaced people who are already excited at the thought of going home.

Myriam was first interviewed by SAT-7 in October 2014. She said then that she would ask God to forgive the militants who threatened her family’s life, and a video of the exchange was watched by more than 200,000 people within 42 hours of appearing on the SAT-7 ARABIC Facebook page.

“God loves everybody,” Myriam said. “I’m not angry with God because we left Qaraqosh, I thank him because he provided [for] us. Even if we’re suffering here, he provides for us.” She ended the interview with a song, How Joyful is the Day, about how much she loves Jesus.

Last week, the family sang the worship song again, and Waleed said they had been strengthened during their difficult ordeal by the peace of God.

“Peace is the peace of Jesus and not worldly peace,” he said. “Peace isn’t in a house or in the land. Even in fire you can have the peace of Jesus. As long as we have it we will be stronger than those who threw us out. When you love Jesus, no one can conquer you.”

Qaraqosh was once home to Iraq’s largest Christian community, but around 50,000 people were forced to flee when ISIS overran the town in August 2014.

Some reports say Qaraqosh has now been liberated as part of the offensive to retake Mosul – ISIS’ last stronghold in Iraq – which began on October 17, though others say Iraqi troops are still battling a small number of militants left in the town.

Security sources have confirmed that around 50 villages and towns around Mosul have been liberated, however. On Thursday, government troops reclaimed Bartella – a Christian town about nine miles from Mosul. On Saturday, the bells of the Mart Shmony Syriac Orthodox Church were rung for the first time since 2014.

Father Thabet, a priest from Mosul, spoke to SAT-7’s Ingy Magdy last weekend. He said that there were “only a few” Christian families left in Mosul, and that the Church is waiting until the Nineveh Plain is totally secure before they encourage Christians to return home.

“We need to make sure the liberation process is final and the area is secure and the path to return is safe as well as adjust the infrastructure and stabilize the economic situation so they can return home,” Thabet said.

“It is great that the liberation comes at this time especially after two years have passed but our joy will be complete when everyone is back home safe and secure.”

He added: “We want to double our prayers in order to have stability in Mosul so it becomes better than it was.”