An elderly Christian widow who survived two years of Islamic State rule over her northern Iraqi town said the jihadists threatened to kill her, forced her to spit on a crucifix and made her stamp on an image of the Virgin Mary.

Zarifa Badoos Daddo, 77, was reunited with her family on Sunday after Iraqi forces drove Islamic State from Qaraqosh as they advanced on Mosul, the militants’ last major urban bastion in the country. The forces found her sheltering in a house they thought was abandoned or booby-trapped with explosives.

Most residents of Qaraqosh – Iraq’s largest Christian town – had fled toward the country’s autonomous Kurdish region more than two years ago as the jihadists approached, but Daddo stayed on with another elderly woman.

Her relatives had long feared she was dead.

Islamic State singled out religious minorities in northern Iraq, including Christians and Yazidis, for murder and eviction after declaring a caliphate in 2014 over territory they captured there and in neighbouring Syria. Their seizure of Mosul and surrounding towns effectively drove Christians from the area for the first time in two millennia.

Daddo, who is hard of hearing, told Reuters on Sunday that the militants had not physically hurt her, but had intimidated and robbed her, made her desecrate her religion and tried to force her to convert to Islam.

“They told me to spit on the crucifix. I was crying inside but I couldn’t show it,” she said at a relative’s home in the Kurdish capital Erbil, an hour’s drive from Qaraqosh.

Then the jihadists demanded she stamp on an image of the Virgin Mary that she kept at home. “I said (to myself), ‘Oh Mariam, I will step on you but you know I don’t mean it’.”

Daddo, whose husband died in 2014, was reunited with her brother and other relatives in Erbil on Sunday. Her jubilant family slaughtered a lamb to celebrate what they consider the miracle of her survival.

The widow, with bushy gray eyebrows, decaying teeth, and a cross tattooed on the back of her wrist, sat with relatives who wept and applauded as she recounted her most harrowing encounters. She spoke in a mix of Arabic and Syriac, an ancient dialect of the Aramaic language which Jesus spoke.

Her niece said the family had lost touch with her about 18 months ago when Islamic State clamped down on telephones in areas under their control.

“We didn’t know anything about her. Anything could have happened.”

Most of Iraq’s Christian population is based in the north, around Mosul, which is one of the world’s oldest centres of Christianity, dating back to the first century AD.

A quarter of a century ago there were well over a million Christians in Iraq but their numbers dwindled during the 1990s as the country faced war and sanctions, and the exodus accelerated after waves of attacks on Christians in the sectarian violence following the 2003 U.S.-led invasion.

Qaraqosh, about 20 km (13 miles) southeast of Mosul, was a Christian town of about 45,000 people before Islamic State swept across the region.

Daddo was sleeping in her garden when the jihadists entered the town in August 2014 and issued an ultimatum: pay a tax, convert to Islam, or die by the sword.

She said she too had wanted to leave the town, but eventually lost hope. “I cried because I wondered where I would go,” she said. “There was nobody left in Qaraqosh. We had no neighbours, nobody. They all left.”

Islamic State provided her with enough food to survive, she said, but they also made surprise visits to the house which left her terrified.

“We were two women living by ourselves. They would come at night, sometimes they would come at four in the morning, so we were scared,” said Daddo, wearing a black cloak that covered her hair and a purple sash across her chest.

“They would say, ‘Sister don’t be scared, we are your brothers. You are one of us now.'”

The militants took all the valuables from her house. When she assured them there was nothing left for them to take, they threatened her: “They came back another day and said, ‘If you don’t give us your money, we will empty this machine gun in your chest.'”

Islamic State repeatedly tried to convert Daddo to Islam. At first, she argued. “I tried to tell them, ‘What is the difference between a Muslim and a Christian? We all worship God’.”

“My heart would race when they tried to get me to convert. They would try to get me to (say the Muslim declaration of faith). I told them I didn’t know how to say it, and I said it in reverse.”

Eventually, though, Daddo yielded: “I would say what they wanted. My life is dear to me so I said what I had to.”

Islamic State was driven out of Qaraqosh nine days ago. On Sunday, in a charred church, the Syriac Catholic Archbishop of Mosul celebrated mass in the town for the first time since its recapture.

Back in Erbil, perched on a couch under an image of the Last Supper, Daddo said she was relieved to be back with family and friends. “What do you expect? Wouldn’t you be happy? Now the whole world is happy.” 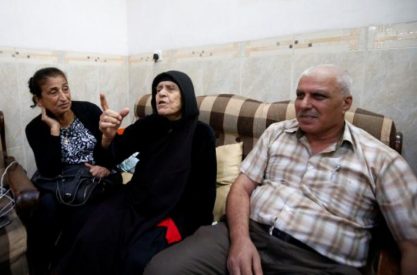 Zarifa Badoos Daddo (C), 77, speaks during an interview with Reuters in Erbil, Iraq. Zarifa was reunited with her family on Sunday after Iraqi forces drove Islamic State from the town of Qaraqosh, southeast of Mosul. REUTERS/Azad Lashkari 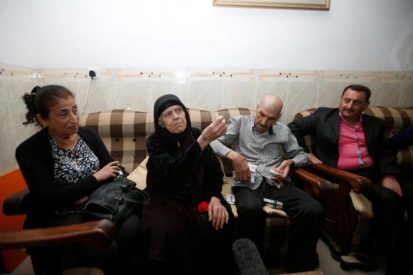 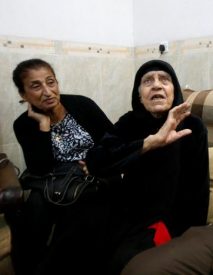