Is This The Face Of Jesus Christ Himself? Scientists Believe It Could Be.

Previous Next
Is This The Face Of Jesus Christ Himself? Scientists Believe It Could Be.

Found in a cave in Jordan and now analysed by scientists using the latest techniques, some people believe this detailed lead portrait of a Nazarene is the actual face of Jesus Christ.

It is among lead codices that also contain written references to Jesus and his disciples and which scientists this week said could be as much as 2,000 years old, scientists say.

Some people even believe they could be the sealed books mentioned in chapters five and six of the Book of Revelation. According to some interpretations of the Bible, Jesus will return once all seven seals are opened.

The 70 ring-bound copper and lead codices, found by an Israeli Bedouin in a cave in Jordan in about 2008, have previously been dismissed as forgeries.

But scientists from the Nodus Ion Beam Centre at the University of Surrey in Guildford have been examining the age of the lead. The corrosion on the plates has also been tested.

A press release issued by the Ion Beam Centre quotes Dr Rowan Williams, former Archbishop of Canterbury and now Master of Magdalene College, Cambridge. Williams calls for “a fresh examination of the Jordan Codices” in response to the test results.

Professor Roger Webb, director of the Ion Beam Centre, told Christian Today that all he could say for certain was that the lead tablets were older than 100 or 150 years old. The lead had definitely not been smelted recently. But he added: “That does not necessarily mean anything.”

The tablets and lettering were made from a mould, so the lettering could not have been added in modern times to older tablets. Webb said: “If the lead is old, the writing is old. But there is no guarantee that what is written on them is true.”

Another scientist had said that the corrosion was such that it could only have occurred over a long period of time.

A British couple, David and Jennifer Elkington, have been liasing with the Jordanian government in an attempt to verify the authenticity of the find. The Department of Antiquities in Amman, Jordan loaned them the codex for testing.

David Elkington, an independent scholar, told Christian Today that the portrait of Christ has been analysed by a corrosion expert who says that it is beyond doubt genuine.

“His face is surrounded by a halo and he appears every inch the Nazarene. The Codex was sealed on all sides and then placed in lead box before being sealed away in the cave in Northern Jordan.

“Any remaining doubts must now be answered by proper excavation of the site in Jordan and carried out by proper archaeologist with impartial objectives.”

Webb, working with a colleague, Professor Chris Jeynes, confirmed in their tests that radioactivity from polonium that is typically seen in modern lead samples was entirely absent, indicating that the lead of the codex was smelted more than one hundred years ago. Comparative measurements were made of a sample of ancient Roman lead unearthed from an excavation site in Dorset. 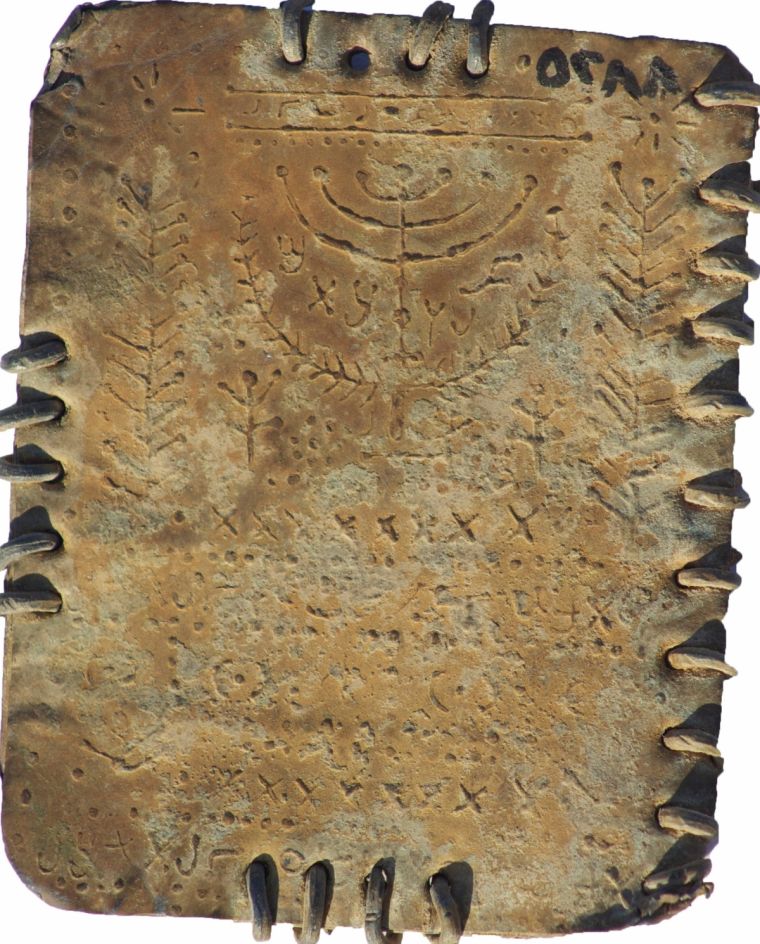 The Jordanian codex loaned to the Elkingtons for testing,

They say in their press release that the Dead Sea Scrolls were only discovered in 1946, making “incredible” a prior forgery of the Palaeo-Hebrew script on the codices. “On a scholarly level, such a forgery would require the very latest academic research,” they added.

The scientists said: “All charges of fakery and forgery raised by bloggers and some scholars should now be dismissed to allow proper study and preservation of the sites in which these items were discovered. This will provide additional evidence that should enable more accurate dating and better interpretation of the meaning and purpose of the items.”

The Jordan Codices comprise a series of upwards of seventy ring-bound books made entirely of lead, with strong evidence showing that they date back to the first and second centuries CE.

Linguistic analysis has demonstrated that they are the earliest and only Hebrew-Christian documents in existence.

Preliminary work indicates that part of the collection dates to the first century, whilst the other part dates to the second century.

Distinguished archaeometallurgist and former Director of Antiquities in Amman, Dr Ziad Al Saad, hailed the archeological find as one of the most historically important in Jordan: “These manuscripts are a part of Jordan’s heritage and global heritage, and we hope to share it soon with the rest of the world.”

Bernhard Lang, Emeritus Professor of Religion, University of Paderborn and St. Andrews, said: “The suspicion of forgery, sown by the bloggers and a rashly published note in the Times Literary Supplement in 2011, has been disproved by several independent scientific tests of the metal as well as yet unpublished expert study of the writing. No one of those actually involved with research on the codices has any doubt about their antiquity.”

Professor Philip Davies of the University of Sheffield and chairman of the Palestine Exploration Fund said: “We ask the authorities in Amman to make an immediate and detailed statement about the finds and their intentions regarding them. This is not just of national and cultural importance for the kingdom of Jordan, but also of all those interested in the antiquity of the Middle East.”