“This morning the Holy Father Francis received in audience His Excellency Mr. Mahmoud Abbas, president of the State of Palestine, who subsequently met with His Eminence Cardinal Secretary of State Pietro Parolin, accompanied by His Excellency Archbishop Paul Richard Gallagher, secretary for Relations with States.

“During the cordial discussions, the parties evoked the existing good relations between the Holy See and Palestine, sealed by the Global Agreement of 2015, which regards essential aspects of the life and activity of the Church in Palestinian society. In this context, mention was made of the important contribution of Catholics to favouring the promotion of human dignity and assistance for those most in need, especially in the fields of education, health and aid.

“Attention then turned to the peace process in the Middle East, and hope was expressed that direct negotiations between the Parties may be resumed to bring an end to the violence that causes unacceptable suffering to civilian populations, and to find a just and lasting solution. To this end, it is hoped that, with the support of the international community, measures can be taken that favour mutual trust and contribute to creating a climate that permits courageous decisions to be made in favour of peace. Emphasis was placed on the importance of safeguarding the sanctity of the Holy Places for believers of all three of the Abrahamic religions. Finally, particular attention was dedicated to the other conflicts affecting the region.”

After the papal meeting, Abbas formally inaugurated the new Palestinian embassy across the street from one of the main gates of Vatican City. He pulled back a curtain revealing a plaque and extended the Palestinian flag from a flagpole outside a window.

The embassy, located in the same building as the embassies of Peru, Ecuador and Burkina Faso, is a fruit of recent accords in which the Vatican formally recognized the State of Palestine.

In his comments to reporters, Abbas said he hoped other countries would follow the Vatican’s example and recognize the Palestinian state. 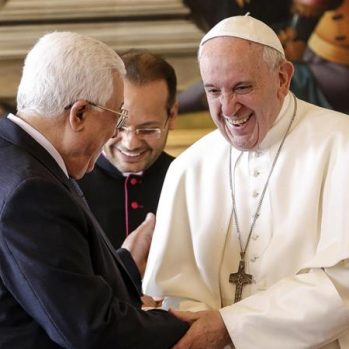 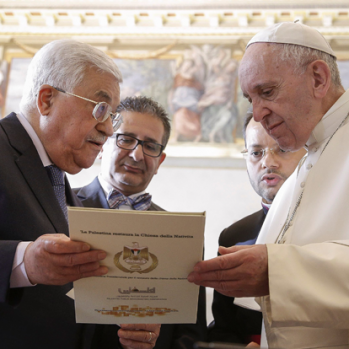 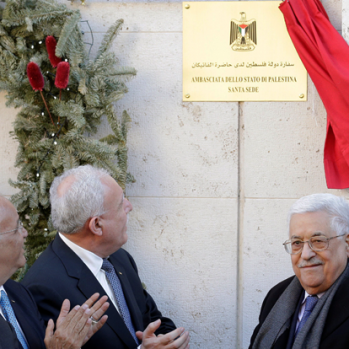