Previous Next
Reflections on Gaza – January 2017

Is Gaza’s Situation Gradually Getting Worse? 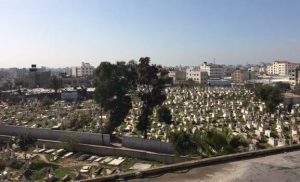 It seems that the general situation in Gaza is indeed getting worse. Electricity is down to about 3 hours per day; the general unemployment rate stands at a staggering 44 percent and 65 percent amongst the
youth sector. More than 90 percent of households do not have access to clean potable water and sanitation is almost non-existent! On top of that, there is a general lack of safety and security as poverty breeds lawlessness and theft is on the rise. An internal feud between two large clans is the talk of the town; there are even calls for ‘revenge’ between clan members.  On a wider scale, the borders with Egypt continue to be closed most of the year, though there are pockets when the border control has eased and people have been able to cross. The Israeli blockade on the border with Israel also continues unrelentingly and has even passed its tenth year. It was reported that the number of issued permits to leave the Gaza Strip through Israeli border control has declined in recent months. 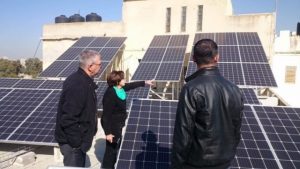 In the first days of the 2014 war on Gaza, I received an urgent call from the director of Al-Ahli Arab Hospital who expressed her deep worry about how she will keep the hospital functioning. Gaza’s power plant was just destroyed and the hospital was running exclusively on back-up generators which required a constant fuel supply. The director pleaded with me that without fuel, the operating theaters would be shut down, dialysis machines would stop, and patients could die! We committed funds we did not have to save lives, but a solution was urgently needed to avoid a similar situation in the future. Immediately after the war, we teamed up with the hospital administration to come with an alternative solution to the hospital’s expensive and polluting generators. The solution was clear – solar energy which is an environmentally – friendly alternative for Gaza’s electricity shortages. 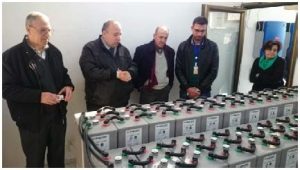 During this trip, it was a dream come true for me personally, to see Al-Ahli Arab Hospital main hospital units – the operating theaters, the emergency room and outpatient clinic fully functioning exclusively on solar energy. The financial support from our generous donors has made this all possible! I was assured by the hospital’s technical team that unless there is a direct hit to the hospital, the newly installed solar energy system will continue to provide an uninterrupted supply of electricity to the main units in the event of a future conflict. What a great achievement and a source of great accomplishment and pride! 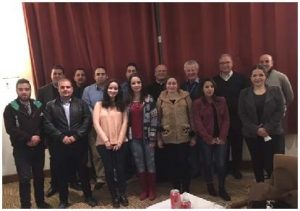 In 2010, CNEWA – Pontifical Mission launched a Gaza scholarship program to provide financial assistance for needy Christian students who intended to enroll at a local Gaza university as they were prohibited from attending university in the West Bank due to the Israeli blockade. Back then, the program began with 10 students and we are proud to report that we now have 22 students in the program in addition to those that have graduated. As promised to our scholars, the scholarship program was combined with an employment program of ours as Gaza’s job market is extremely competitive and jobs are sparse. In 2015, CNEWA-Pontifical Mission in collaboration with the Holy Family Parish hired 5 Christian graduates for various paid positions at the Parish. The following year, we launched another employment program in collaboration with 4 institutions in Gaza, employing another 16 Christian graduates. I am proud to report that no less than 10 graduates of our scholarship program transitioned into our employment programs. The likelihood of these young people opting to stay in the Gaza Strip is tremendously enhanced through these interventions. 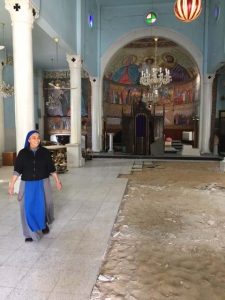 During our various visits to our partner institutions in the Gaza Strip, the shear enthusiasm expressed by the directors of the institutions is very contagious! All of them have expressed the desire to expand the premises and deliver higher quality of services for their beneficiaries. For example: the Near East Council of Churches is in the process of expanding and introducing new VTC study programs including a heating/air conditioning unit repair program as well as solar energy system repair program. The renovation work at the Holy Family Parish complex is ongoing with much anticipated progress and the final landscaping project will begin soon. The YMCA – Gaza has a new Board of Directors who has plans to expand the YMCA facilities and renovate existing sections including the kindergarten. The renovation work at the Rosary Sisters School are proceeding well and there are plans in the making to construct a new building on campus that will expand the school; it was reported that the enrollment rate has increased since our last visit. The Ahli Arab Hospital is gradually opening sections of its new diagnostic center and there are plans in place to connect the entire hospital to a solar energy system. The Greek Orthodox Cultural Center will open soon thanks to the new generator that was procured. There are possible funds from Arab sources to finish the second floor of the center and once opened, will introduce arts and culture in Gaza as well as provide employment for the unemployed. It is inspiring how Gazans find the strength and vision to plan for the future at a time when Gaza seems so bleak and depressing!

During our visit, we had the honor to inaugurate new programs for 2017. A new three-year employment program in partnership with the Ahli Arab Hospital will expand our employment generating initiative in the Gaza Strip, enabling Al-Ahli to provide skills training and employment for 297 unemployed medical professionals and non-professionals. In the first week of advertising the program, some 2,400 applications (for the 99 jobs available in year one) were received which confirms Gaza’s desperate job market! We also signed an agreement with Al-Ahli to launch a program to provide medical care and food for 240 malnourished children. Furthermore, we signed an agreement with Fr. Mario da Silva -Latin parish priest in Gaza, to provide 12-15 impoverished Christian families and elderly with household solar energy systems that generate enough electricity to power household appliances while reducing household reliance on Gaza’s unstable electrical grid.

We were privileged to have our visit coincide with the annual pastoral pilgrimage of the Holy Land Coordination (HLC), consisting of 30 Catholic bishops and support staff from around the world. Their visit included a stop at the Al-Ahli Arab Hospital, project site visits of Catholic Relief Services, visit to the Latin Parish and the Daughters of Charity. While on their trip to Gaza, the Bishops shared a meal with 15 beneficiaries of our scholarship and employment programs. The graduates expressed their gratefulness to see such a large Catholic delegation visit Gaza and the feeling they had that they are not alone and not forgotten. The solidarity was more important to them than any financial support. Though visits to Gaza are becoming more difficult, the decision of the HLC to continue to keep Gaza as part of their program went a long way in uplifting our people who easily feel that they get forgotten.

Like all previous visits to Gaza, I return with mixed feelings and certainly with continued commitment and responsibility to uphold our programs in the Gaza Strip. If our brothers and sisters locally and around the world could experience what life in Gaza is like and what it means to live on so little while continuing to keep hope and faith alive, our world will certainly be a better place. Visiting Gaza is a crash course in the meaning of humility, dignity, tolerance, perseverance, patience, creativity, resourcefulness, and self-respect. I learn every time I am there. Please continue to pray for Gaza!

Our accomplishments in Gaza could not have been possible without the strong moral and financial support from our headquarters – CNEWA in New York, as well as from CNEWA – Canada. I also extend our deepest appreciation to the following supporters: Misereor – Germany; Children’s Relief Bethlehem (Kinderhilfe) – Switzerland; Manos Unidas – Spain; Kindermissionwerks (PMK) – Germany; Friends of the Holy Land – United Kingdom; Knights of the Holy Sepulcher – Holland; Embrace the Middle East – United Kingdom; Christian Brother Community at Bethlehem University; Open Doors – Holland; Mr. and Mrs. Anton Kattan – Abu Dhabi; as well as some anonymous donors. Thank you so much for being part of our achievements and success!