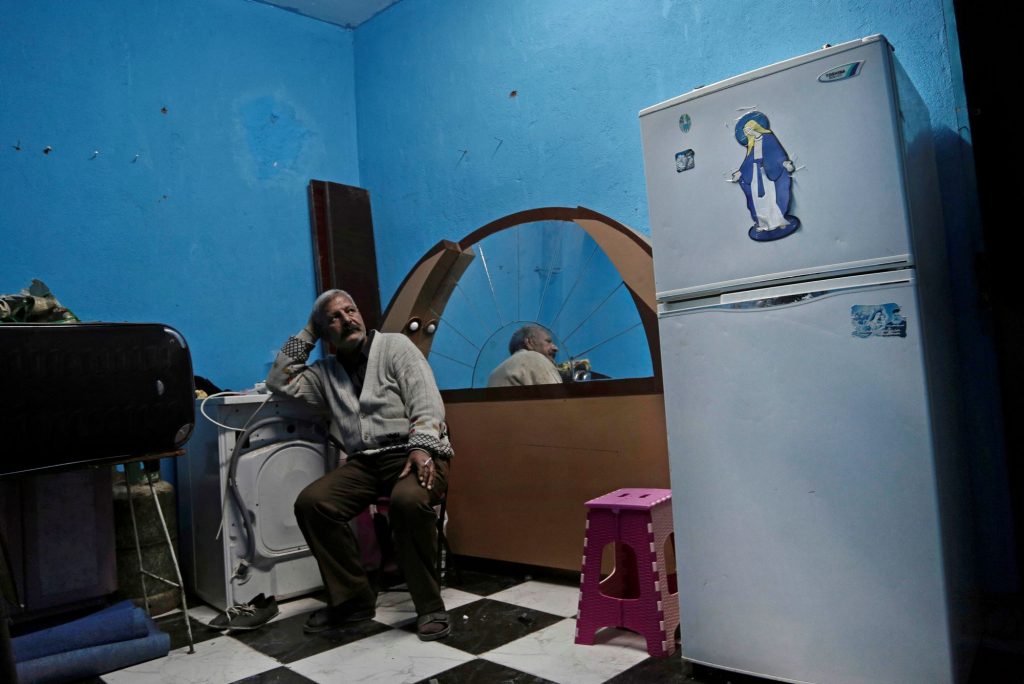 Egyptian Christian Ezzat Yaacoub Ishak, who fled el-Arish in northern Sinai two days ago due to fighting, sits in his newly rented apartment, in Ismailia, 120 kilometers (75 miles) east of Cairo, Egypt, Sunday, Feb. 26, 2017. Egyptian Christians fearing attacks by Islamic State militants are fleeing the volatile northern part of the Sinai Peninsula for a fourth day, after a string of sectarian killings there sent hundreds fleeing and raised accusations the government is failing to protect the minority. (AP Photo/Nariman El-Mofty)

If Pope Francis does indeed go to Egypt to visit Al-Azhar, he may need to make sure that any detente with the Sunni Muslim center includes clear insistence that the country’s Christian minority must be protected. Otherwise, local Christians may see the visit as providing cover for their persecution.

By now it seems clear that Pope Francis will visit Egypt this year. The Vatican has confirmed that a trip is in the works, though not the dates of May 20-21 reported by Italy’s state-run television service RAI.

The main focus doubtless will be the budding efforts by the Vatican and Al-Azahar, the leading center for learning in Sunni Islam, to join forces in delegitimizing religious pretexts for violence. That’s obviously a worthy and timely cause, and it alone would justify the outing.

There will also be a strong ecumenical component, since Egypt is home to the Coptic Orthodox Church, representing around ten percent of the national population with roughly 20 million followers, the largest Christian community in the Middle East.

(All by itself, the fact that two Christian leaders who both carry the title of “pope,” Francis and Pope Tawadros II, will be in the same room, provides some good color.)

Yet there’s another compelling reason for Francis to go to Egypt, though it remains to be seen how much emphasis it actually will get: To make a stand in defense of persecuted Christians.

Despite the transition in Egypt in 2014 to a new government led by former army chief Abdel Fattah al-Sisi, who came to power vowing to protect minorities and reject terrorism, human rights experts say that assaults on Christians in the country are a chronic problem that’s getting worse. A recent wave of anti-Christian attacks in the country’s Sinai region offer merely the latest example.

Probably no group better symbolizes the challenges than the Zabbaleen, Cairo’s legendary “garbage people” – an overwhelmingly Christian underclass of 50,000 to 70,000 people who collect and recycle the city’s gargantuan mounds of refuse, using pick-up trucks and donkey-drawn carts.

The Zabbaleen face steep hardships for reasons both cultural and religious.

In June of 2015, my Crux colleague Inés San Martín met a 33-year-old assistant pharmacist named Ayman Samwel, who told us that just days before he had been awakened at 3 a.m. when police burst into his home.

When Samwel’s wife cried out, he said, the police slapped her into submission. They proceeded to drag him through the streets to a local station house, beating him along the way with fists and batons and shouting abuse – including, he said, a colloquial insult in Arabic that translates roughly as, “[Expletive] your Christianity!”

The police also ripped a St. Nicholas medal from around his neck, Samwel said, containing a half-gram of gold.

Samwel displayed his wounds to us, including lacerations to his fingers, arms, back, and feet – partly sustained, he said, when he was forced to stand naked and blindfolded in the station for more than four hours as police continued to beat and stomp him at will.

Samwel said he suffers from problems with his blood pressure, and at one stage asked for a glass of water. He said the response was, “No, we’d really prefer for you to die.”

Leaders among the Zabbaleen told us that such abuse is endemic, and perpetrators enjoy basic immunity.

In rural areas of the country, Christians are often even more exposed to risk. For instance, we met Nabil Soliman, 55, basically a modern-day Job in terms of the misfortune he’s endured, all due to the fact that he was a prominent Christian in an overwhelmingly Muslim area.

After a mob burned his home in a small Upper Egyptian town called Nazlet el-Badraman in November 2013, Soliman and his wife Sabah, along with their six children, fled to a poor neighborhood of southeastern Cairo called Zahra. They survive in a run-down apartment that costs $65 a month, and can’t really afford even that since he’s out of work.

To call their new home “spartan” is a serious understatement. There’s no heating or cooling, so the choice generally boils down to closing the windows and being suffocated by heat, or opening them and being swarmed by the flies that proliferate in the area due to open sewage and garbage in the streets.

Soliman also is one of roughly 10 million Egyptians infected with hepatitis C, and depends upon two sons selling second-hand clothes to pay for his medication.

As if that weren’t enough, Soliman faces a trumped-up murder charge related to the killing of a thug who wasn’t even in the same town as Soliman at the time. The family of the dead man has acknowledged the charge to be bogus, allowing Soliman to be released on $250 bail after 80 days behind bars, yet in theory he could still be forced to stand trial.

“I lost my job, my home, everything I owned,” Soliman said in a June 25 interview. “I have no pension, so the 24 years I worked are just gone.”

Such stories are stunningly common, illustrating the gap between al-Sisi’s vows of protecting Egypt’s Christian minority and the social reality of a country where militant Islam often sets the tone.

If Francis’s partnership with Al-Azhar is to avoid leaving local Christians embittered and cynical, it has to include a clear insistence from the pontiff that its Islamic leadership press both the government and their fellow Muslims to do a better job of securing basic safety and full rights as citizens for the country’s Christians.

Otherwise, the risk is that to many Egyptian Christians, Francis’s détente may seem like a pretext for allowing their persecution to go unchecked and unacknowledged.