Annual Retreat Energizes HCEF’S Leadership for 2017 and Beyond 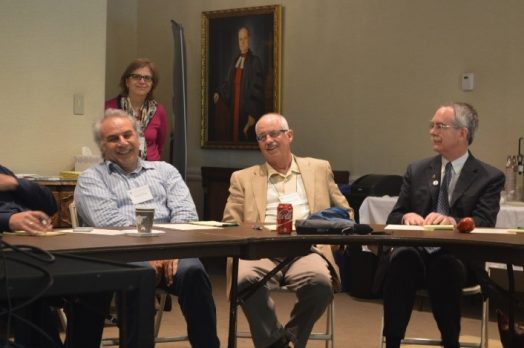 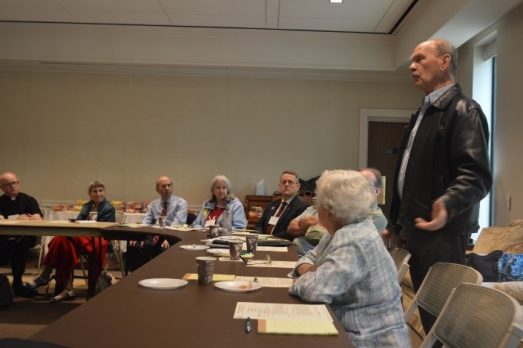 Bethesda, Maryland – Bethesda, Maryland – On Saturday, April 29, 2017, members and volunteers of HCEF’s Board of Directors gathered at the National Presbyterian Church in Washington, DC for HCEF’s annual leadership retreat.  They came from around the country to renew their commitment to HCEF’s cause and to encourage new volunteers to get involved in HCEF’s on-going work in the U.S. and in the Holy Land. 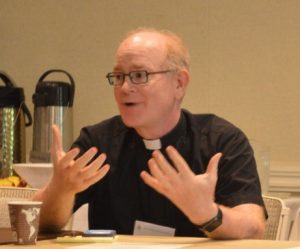 Dr. Sarsar spoke of Jerusalem as “our holiest city and the center of our faith.”  Marking the location of Jesus’ crucifixion and resurrection, Dr. Sarsar stated that Jerusalem is “the source of our lived experience and salvation.”  He highlighted Jerusalem’s spiritual, religious, cultural, historical, and political nature, emphasizing its unique character as a city that embraces many faiths, cultures, languages, and traditions. Dr. Sarsar called for preserving Jerusalem’s Christian identity and invited participants to put their faith into action by supporting HCEF and by standing in solidarity with the Christians of Jerusalem, the Holy Land, and the rest of the Middle East. Mr. Elias Saboura, Esq., a long-time supporter of HCEF with roots in Jerusalem, praised the organization’s unique mission and commended Dr. Sarsar for focusing on Jerusalem’s promises and challenges. 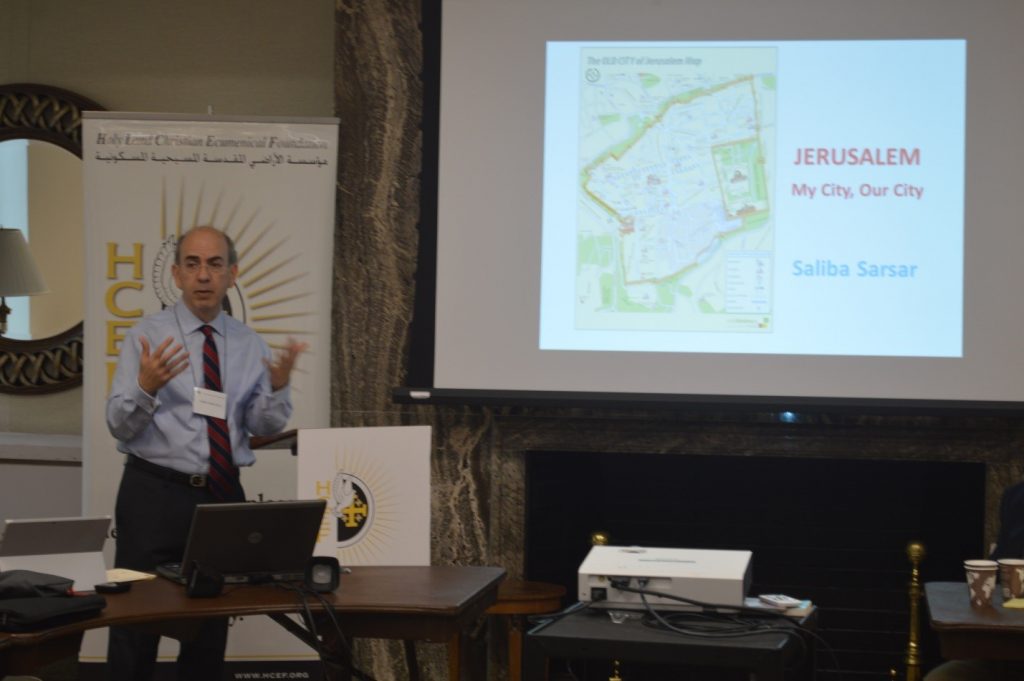 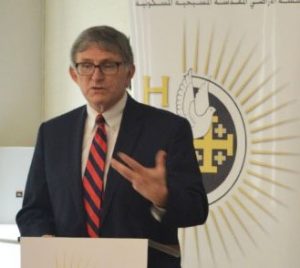 Reverend Dr. David Renwick, Senior Pastor, National Presbyterian Church, reflected on the role that U.S. Christians can play in the Holy Land, citing it as an important “way to serve Jesus Christ.”  He shared his experience leading a pilgrimage to the Holy Land, and spoke of how HCEF acts as a crucial mediator and advocate for Christians of the Holy Land.

Mr. Rabie then gave an overview of the impact of HCEF’s programs over the past decades and opened a discussion on current and new HCEF initiatives. Participants learned about the need of Christians in the Holy Land and how each can engage personally with them.  Dr. Dorothy Buck, a member of HCEF’s Board of Directors, shared her experience in HCEF’s Living Stones Pilgrimage Program and the benefit of interacting directly with Christians in the Holy Land.  Fr. Predmore, who will be leading a “living stones” pilgrimage to the Holy Land on November 6-17, 2017, stressed the importance of making the experience a spiritual one, making scripture come alive through the lives and stories of the “Living Stones.”

Mr. William Newbrough, District 18 Warden of the State of Maryland of, Knights of Columbus ( KofC), along with his colleagues, Joe Stewart, District 18 Deputy, and Caesar Sanchez, District 18 Member, talked about Kof C’s partnership with HCEF, including their longtime support for the Children’s Education Fund. He highlighted their new collaborative initiative, the Christian Solidarity Action committee (CSAC), which seeks to raise awareness and foster greater solidarity with our suffering brothers and sisters in the Middle East. 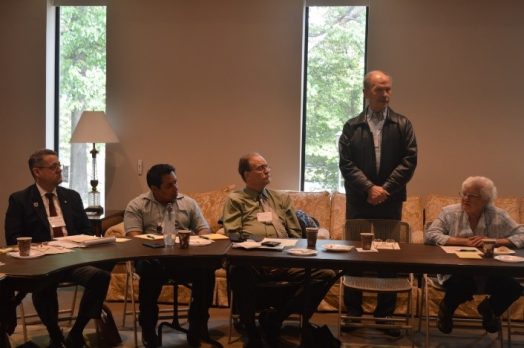 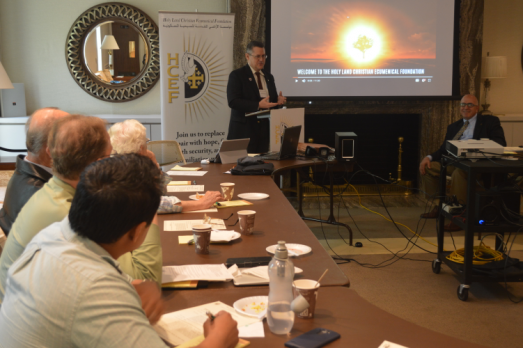 Following lunch, Ms. Kim Viti Fiorentino, Chancellor and General Counsel, Archdiocese of Washington, affirmed the continuous support of the Archdiocese to HCEF, for its work in the Holy Land.  She reflected upon the spiritual bonds that bring together Jews, Muslims, and Christians, and stressed the message His Holiness Pope Francis shared on his visit to the Holy Land in 2014—to build mutual understanding and to promote dignity in the land where Christ lived and walked. Ms. Fiorentino highlighted the importance of caring for the human dignity of Holy Land Christians by expanding access to housing, employment, and leisure. Mr. Rabie expressed his gratitude to Ms. Fiorentino, a wonderful example of women’s leadership in religious organizations, for her longstanding support of HCEF.

After personally greeting every retreat participant, H.E. Ambassador Husam Zomlot, Head of the PLO General Delegation to the United States, spoke on the issue of Palestine and the Prospects of Peace.  He emphasized that HCEF’s mission is central in fostering peace and security in Palestine, highlighting that Palestinian Christians are an integral part of the Palestinian fabric. Ambassador Zomlot stated that the current Israeli Government is oriented toward annexation and has no interest in building peace in the region.  Rather, it has been taking steps to undermine international solidarity with the Palestinian people. He concluded by stressing the importance of negotiating a peaceful agreement between Palestine and Israel that seeks to positively affect their social relations. 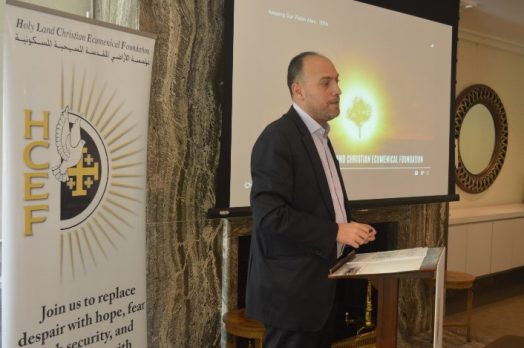 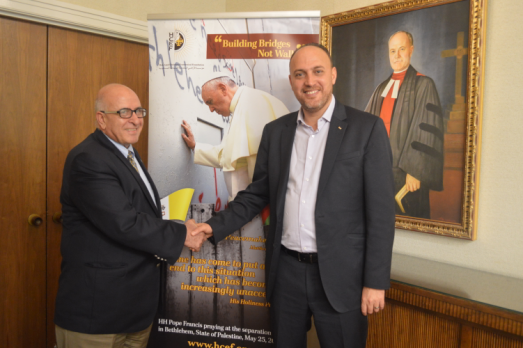 The leadership retreat closed with a brainstorming session for the 19th International Conference & Awards Banquet, set for Friday-Saturday, October 13-14, 2017, at the Crystal City Marriott at Ronald Reagan Washington National Airport.  The conference will highlight the Christian presence in Jerusalem and the need for coexistence, as well as shed light on the plight of Christians in Middle East in general.

The retreat was adjourned with a closing prayer by Father Predmore.

The retreat was followed by a traditional Palestinian dinner at the home of Mr. and Mrs. Rabie. HCEF volunteers and Board Members left the retreat spiritually nourished and motivated to help HCEF grow and succeed.

If you would like to join the HCEF family, there are plenty of volunteer opportunities to support our brothers and sisters in Christ who call the Holy Land their home. Please contact Mr. Rabie by email at rabie@hcef.org. 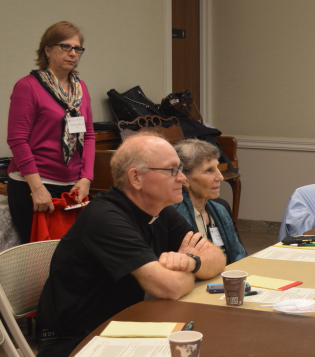 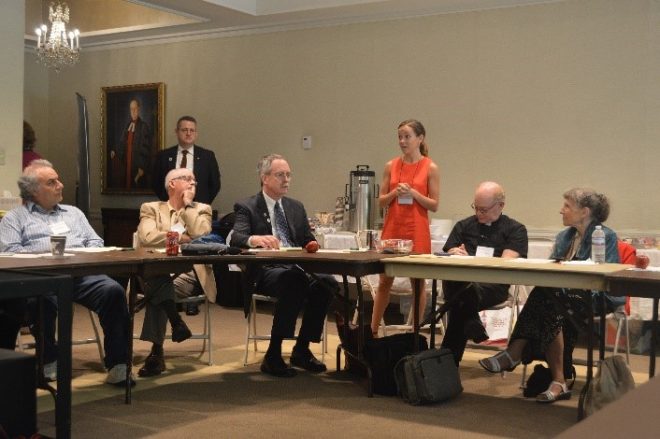