The Archbishop of Canterbury, Justin Welby, has said that by using the office of the US president, Donald Trump has the capacity to ‘tip things very, very decisively’ when it comes to bringing peace between Israel and the Palestinians.

‘We know from history in this region that determined leadership by the president of the United States together with patient working by lots of other people in the background, often unknown, can tip things very, very decisively – it has done in the past,’ Welby said.

The Archbishop was speaking at a press conference in the Old City of Jerusalem this afternoon, on the penultimate day of a tour of the Holy Land during which he has held lengthy, separate meetings with both the Israeli Prime Minister Benjamin Netanyahu and the Palestinian President Mahmoud Abbas.

‘People have lots of views about President Trump but when he comes here my prayer for him is that he will be filled with determination and courage and given gifts of wisdom that will make a difference,’ Welby added.

‘His office has the capacity to make a difference. It’s one of the very few offices in the world outside this region that does. And so we pray for him to be able to do that…I’ve never met him, I don’t know him at all, but he will be in my prayers.’

Welby was at the Anglican-run St. John eye clinic after a packed day of fact-finding, politics and prayer in the tense west bank city of Hebron, home to the Tomb of the Patriarchs and fiercely disputed by the dwindling number of resident Palestinians and a few hundred Israeli settlers who are protected by a heavy army presence.

It began deep inside the south Hebron hills, with Welby listening intently, as he has done throughout to all parties in this highly intensive trip.

Inside a cramped porta-cabin surrounded by rubble in Susiya, Nasser al-Nawaja’a was explaining how his Bedouin community is at risk of demolition and displacement by Israel.

‘We live under threat and we can hardly cope with what’s going on,’ Nasser says. ‘People feel very afraid. We need support – we value your visit.’ 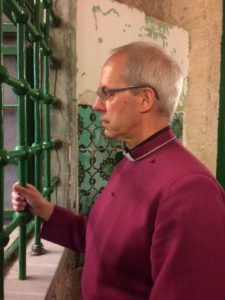 The Archbishop, who was briefed on the local situation by the human rights activist Rabbi Arik Ascherman as his convoy sped through the West Bank early this morning, responded: ‘We admire your courage and persistence and the way in which you hold on despite the demolitions and continue to rebuild. And we know that every human being is made in the image of God and that every human being has the right to security and peace provided that they live well.’ Welby assured those present that he will take up the man’s cause when back in the UK, and speak as a ‘personal witness,’ adding: ‘The presence of the Rabbi here today shows this is not about Jewish versus Muslims or anything like that; this is about justice.’

Welby then signed Nasser’s ‘visitor’s book,’ writing: ‘We will remember you, speak of you and pray for you,’ before moving on to Hebron where he met with Kamel Hmeid, the Palestinian Authority governor of the city and was briefed by the Hebron Rehabilitation Council [HRC] on the plight of Palestinians there. Many have deserted the city since the Occupation – according to the HRC, there were 10,000 in the 1950s and 400 in 1996 – though the HRC is bringing thousands back with a string of housing incentives.

Guided by the HRC director Imad Hamdan, Welby underwent an extensive tour of Hebron’s Old City, winding through the souks and occasionally being accosted by local Palestinians about the settlers, who throw stones, urine and worse into the ancient streets which are protected by netting above. Jamal Maraqa, 55 told Welby of ‘harassment in front of soldiers’ eyes’ before saying he was ‘shocked when I saw [the Arcbishop] just now’.

There was momentary relief for Welby, who has shown remarkable stamina while being bombarded daily with propaganda from both sides throughout the trip, pulled in both directions between the Israelis and the Palestinians in what has inevitably been a highly political trip.

At the shop of of the Women in Hebron cooperative, which sells local embroidery, Welby was given a colourful purse emblazoned with the words ‘men can do something’ on one side and ‘women can do anything’ on the other. ‘Now that would be good for Katharine,’ a smiling Welby told his wife Caroline, referring to his daughter. The Archbishop also bought several ‘Palestine’ bookmarks for his other children.

Pensively, Welby toured the city’s Ibrahimi mosque, after tucking his crucifix into his cassock and taking off his shoes out of respect. After passing through the controversial Israeli checkpoint, the Archbishop similarly concealed his cross and donned a kippah as he made his way through the Tomb of the Patriarchs, the site holy to both Muslims and Jews in the city centre, surrounded by dozens of female Israeli soldiers and this time guided by a religious Israeli peace activist, Eliyahi McLean.

At the end of his visit to the city which is a microcosm of the conflict here, Welby walked briskly up the near-deserted Shahada Street in the ‘H2’ zone of outer Hebron, which some have described as a ‘ghost town’ because of the derelict markets, part of an area where 512 shops out of 1829 remain closed.

The street runs through what is now the settlers’ security zone, with rows of empty Palestinian shops and houses boarded up with steel shutters, many daubed with Stars of David and where the only vehicles allowed through are those of settlers and the Israeli military.

An hour later, at the press conference in Jerusalem, Welby said that his visit to the West Bank city had not diminished his belief that now represents a rare ‘moment of opportunity’ for peace in this holy but deeply troubled land.