The long road home for the thousands of Iraqi Christians displaced by ISIS is set to begin Monday with the construction of 100 houses– the first of an estimated 13,000 houses to be built in a venture that will cost about $250 million.

Ethnic and religious minority groups like the Assyrian Christians were driven from their ancestral homelands across the Nineveh Plain, a vast region in Northern Iraq, when the Islamic State attempted to establish their caliphate.

But now that ISIS forces have mostly been driven out of the region, the Assyrians are looking to return and rebuild. The work is finally beginning due to an organization called  the Nineveh Reconstruction Committee (NRC), which has received funding from Aid to the Church in Need (ACN), a pastoral aid organization associated with the Catholic Church.

The NRC will break ground on Monday in the Assyrian towns of Bartella, Karamless and Qaraqosh, when they will either repair or completely rebuild the first 100 homes.

Completion of these homes is expected to be completed by summer’s end.

“One hundred is not a large number compared to the many thousands that will eventually be worked on, but it’s a very significant number,” Joop Koopman with Aid to the Church in Need told Fox News. “It’s a concrete sign that this community is on its way to being rebuilt.”

The NRC was set up earlier this year to assist in the planning and supervision of the reconstruction program, which is expected to cost upwards of $250 million. According to a survey conducted by ACN this past winter, about 40 percent of Christian families—roughly 12,000 men, women, and children who fled ISIS when they captured the region—have expressed interest in returning to their homes in the Nineveh Plain. 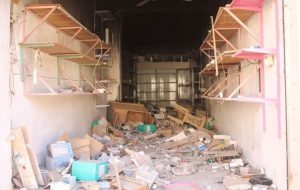 Much of the infrastructure in the Assyrian villages, like stores and shops, will need to be rebuilt. (Copyright: Aid to the Church in Need)

“For a long time people have been saying that Iraqi Christians don’t want to return home.” Robert Nicholson, Executive Director of The Philos Project, a humanitarian aid organization focused on promoting a pluralist Middle East, told Fox News. “Having spoken to many of them, both inside Iraq and around the world, I can tell you that’s absolutely untrue. Many of them would love to come back, and some of them actually are.”

Nicholson added that protection for the Assyrians as they return will be key.

“The big question for all of them is security. Just two years after the Iraqi government and the Kurdish Regional Government abandoned them, weaponless, in the path of ISIS, these Christians are still unsure that anyone has their back,” he said.

“So long as the Nineveh Plain remains effectively divided between Baghdad and Erbil, the security question remains front and center.” 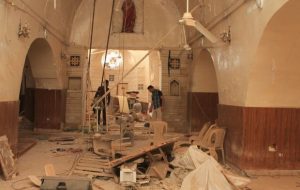 Relief workers survey the damage to a church in Qaraqosh. (Copyright: Aid to the Church in Need)

Also known as the Plain of Mosul, the Nineveh Plain has long been the ancestral homeland for the Assyrian-Chaldean-Syriac Christians, along with other religious minority groups like the Yazidis.

The villages of Bashiqa, Bartella, Karamles, Qaraqosh and Tellisqof were recently liberated from ISIS by the Nineveh Protection Units (NPU) and Iraqi Special Forces, after the city of Mosul was taken back from the terror group, but many of these villages have been left in complete disarray by the terror group.

Most of the infrastructure has been reduced to rubble; in others, dangerous chemical compounds have been dumped, polluting the ground.

“It’s a catastrophe,” one Assyrian from Bashiqa named Laith told Fox News in December. Like many from his village, he was forced to flee two years ago for Kurdish-held territory.

“We are hearing that the situation at Bashiqa is terrible … [ISIS] has destroyed it all,” he said.

“We hope to return with everyone here. God willing, we will return soon.”