Egypt’s Orthodox Coptic Pope was received this month by the Queen, the Archbishop of Canterbury and the Prince of Wales during an historic pastoral visit across the United Kingdom.

The meeting of the Queen and Pope Tawadros II, 118th Pope of Alexandria and Patriarch of the See of Saint Mark took place on 9 May at Windsor Castle.

Tawadros presented the Queen with a Coptic icon portraying the Holy Family’s famous ‘Flight to Egypt’ seen in the New Testament.

After the meeting, His Grace Bishop Angaelos, who leads of the Coptic Orthodox Church in the UK, said: ‘This meeting between Her Majesty and His Holiness is an embodiment of our Coptic Orthodox Church here in Britain, made up of those, many of whom will have roots in Egypt, who still feel connected to Egypt, but are very integrated as British Copts.

‘I am personally thankful for this meeting that reinforces this composite and naturally organic identity at the highest level of our Church and nations.’

The pair met privately before joining the rest of the delegation.

In an address at Lambeth, Pope Tawadros II thanked the Archbishop for his hospitality. He said: ‘We are grateful to God for the co-operation, dialogue, and Christian love between our two Churches.

‘We are hopeful and pray for more and more Christian unity globally and we believe it is possible through the love of God, and through the ecumenical blood of all Christian martyrs.’ 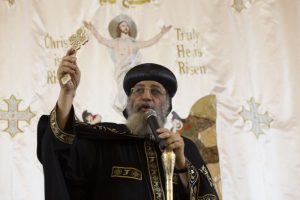 In turn, Welby praised the ‘profound inspiration’ of the Egyptian Coptic Church, which has been subject to severe persecution in recent months, including the Palm Sunday bombings on Coptic churches, which killed 45 and injured over 100.

Welby said: ‘The courage of your people – their constant faith, their steadfastness, their long endurance – brings to life those words we read so often in the epistles of Saint Paul, and we are truly grateful and give thanks to God for you and for your people.’

On May 17, Pope Tawadros, alongside Bishop Angaelos, met with His Royal Highness the Prince of Wales at Clarence House. Prince Charles has been an outspoken voice against religious persecution in the Middle East and Egypt, publicly advocating for Christians and other minority groups in said regions.

Reflecting on the Coptic Pope’s visit as a whole, His Grace Bishop Angaelos said: ‘It has been a blessing for the Coptic community here in the United Kingdom to engage with their shepherd. It was also an opportunity for His Holiness to meet his flock and to encounter some of the work being done under the various ministries within the Coptic Orthodox Church in the United Kingdom.

‘I am thankful that the visit was fruitful and gave His Holiness an overview of the diverse and dynamic role of Coptic Christians across Britain who endeavour to live faithfully according to their Christian principles, while being fully integrated into their surrounding community. I am also pleased that we had the opportunity to learn from the example of peaceful yet powerful resilience that His Holiness and our brothers and sisters in Egypt demonstrate on a daily basis.’