When Brigham Young University associate professor Cynthia Finlayson visited Bethlehem with a professional team of museum specialists to work with the Holy Land Christian Ecumenical Foundation in 2016, all were impressed with the city’s community and rich heritage.

“We really wanted to work together with HCEF and try to bring that experience here to campus to try to reconnect in a richer, deeper way our museum audience here with Bethlehem because it was a world history-changing city if you stop to think about it,” Finlayson said. 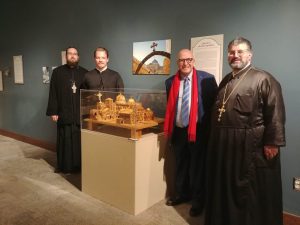 “The exhibit is composed of what Bethlehem is most famous for from the Ottoman period onward,” said Finlayson, who is heading the exhibition.

Objects in the exhibition come from collections including that of the Holy Land Christian Ecumenical Foundation; Farah and Hanan Munayyer, co-founders of the Palestine Heritage Foundation; and Enrique Yidi Daccarrett, whose Palestinian family moved to Columbia after being displaced by war in the mid-1900s, but maintained its traditional mother-of-pearl Bethlehem roots.

“I think the biggest takeaway is that there’s more to Bethlehem than just the nativity story, even though that’s critically important, but a lot of people don’t realize that,” Finlayson said. “There’s just so much that can be shared about this city, both past and present.”

Finlayson described Bethlehem as a nexus where Judaism, Christianity and Islam meet and revere the same site, as well as a city with a rich Canaanite, medieval, Islamic and Christian history.

“There’s a lot going on there,” Finlayson said. “We’re just scratching the surface, so we’re hoping it’s going to open some eyes of people and give them a deeper emotional connection with those things.”

A highlight of the exhibition for both Finlayson and graduate student Josie Newbold, who helped put together the exhibition, is the unique embroidery patterns on the bridal costumes, which use specific colors and motifs to symbolize protection as the young woman transitions to being a wife as well as her village or region of origin.

“You used to be able to walk down the street in the Middle East and tell exactly who this person was and where they were from, whether they were married or single … how you should approach them,” Finlayson said. “Arab dress today is still, they’re very particular about how they dress, even though there’s a lot of modern added mixtures with the West now, so it’s part of their culture.”

Putting together the exhibition has been a hands-on project for dozens of BYU students who have gotten valuable experience and mentoring by helping with each step.

Students also researched the current Israeli-Palestinian situation, which prepares them to deal with complicated subjects in a factual way in a museum setting, according to Finlayson.

“It’s not like we’re just putting pretty things up,” Finlayson said. “Every word had to be checked and every image had to be gone over to make sure that we deal with some of the political issues that are involved here with this topic.”

Newbold said she hopes the exhibition will bring communities together and show there is a lot more to Bethlehem’s story than people normally see.

Finlayson said she hopes visitors come away with an impression of Bethlehem’s ancient, rich, multicultural and multireligious heritage. She also hopes the exhibition dispels some stereotypes visitors may have and broadens their perspective about the cultures and peoples who share and are indigenous to the region.

“The citizens in Bethlehem today, despite all the challenges that they’re dealing with, are an example to us,” Finlayson said. “They’re still hospitable. They’re still friendly. They get up every morning knowing that their situation probably isn’t going to change politically too much given their position behind the Israeli security wall that cuts them off on three sides. But they still try to approach life with faith and being positive, whether they’re Christian or whether they’re Muslim.”

To check the photos of the Museumclick here;