On January 27 at the National Press Building in Washington DC an international press conference was held by the leaders of various prominent organizations to show unity in their opposition to the scheme called “Deal of the Century”.   Dr. Maher Massis, representing the Coalition of Palestinian American Organizations (CPAO) opened up the conference by focusing on the impossible conditions imposed on the Palestinian side as pre-conditions to obtain statehood.   Mr. Omar Baddar represented the Arab American Institute (AAI) and emphasized that the “state” of Palestine envisioned in the Deal is not viable and not based on the principle of equality between the Palestinian and Israel peoples.   Mr. Samir Khalaf, represented the American Arab Anti-Discrimination Committee (ADC) and described the Deal as the Steal of the Century and focused on how it is completely one sided towards Israel and he called on the international community to voice their support for the rights of the Palestinian people.  Mr. John Blackman spoke on behalf of the ANSWER Coalition and emphasized that the Deal is actually a declaration for Apartheid and stressed that peace is not just the absence of war but it requires justice.  Rabbi Weiss represented the Natueri Karta and explained how Zionism is the anti-thesis of Judaism and emphasized that Jews have always lived in Palestine for many centuries in peace. 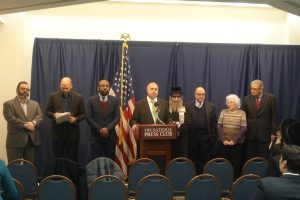 Dr Najat Khalil, representing the United States Palestine Council (USPC) spoke about the human rights violations of Israel and how difficult it is for the Palestinians living there.  Sir Rateb Rabie, President of the Holy Land Christian Ecumenical Foundation (HCEF), spoke from a Christian Palestinian perspective and discussed the role of Palestinian Christians in maintaining the Christian presence in the Holy Land for many centuries.   Sir Rateb also emphasized that mixing American Christianity with politics does not lead us to the work of peace and justice which is a fundamental basis of Christianity.  The final speaker was Mr. Jamal Najjab representing the American Muslims for Palestine (AMP) Mr. Najjab emphasized that President Trump’s plan is an apartheid plan and discussed how his father’s village in the West Bank has land that was taken to build and expand Israeli settlements. He also discussed how the road system exclusively for the Israeli settlements exemplifies the apartheid system that currently exists.   After the press conference, there were several one on one interviews with members of the press and media.