Previous Next
His Beatitude Pierbattista Pizzaballa visits Gaza for Christmas.

GAZA – From Friday, December 17 to Sunday, December 19, His Beatitude Pierbattista Pizzaballa, Latin Patriarch of Jerusalem, went to Gaza for the traditional pastoral visit before Christmas. He was accompanied by the Chancellor Fr. Davide Meli and the CEO of the Latin Patriarchate Sami El-Yousef, and was welcomed by Fr. Gabriel Romanelli, Parish priest of the Holy Family Church in Gaza, and by his assistant Br. Yousef As’ad.

The first day was dedicated to visiting families. His Beatitude Pizzaballa met with about twenty Christian Gazan families, some of whom included newlyweds, newborns, and sick and elderly people. According to Sami El-Yousef, “it was an extremely moving experience because His Beatitude had a chance to witness the living conditions of the people here, their aspirations and all of their issues firsthand. That was very much welcome by everyone in Gaza.” The afternoon was also marked by two official visits. Patriarch Pizzaballa first visited the Thomas Aquinas Center, which offers training courses to young people in various fields (computer science, languages, theology, etc.), and which has the ambition to develop in order to be able to welcome more students. Patriarch Pizzaballa was then welcomed at the Caritas Center by about fifty staff members, before meeting with the director to discuss the health services offered by the center.

This was followed by a visit to the school of the Rosary Sisters, which was partially destroyed during the war in Gaza in May 2021. Patriarch Pizzaballa went there in June to assess the damage and was thus able to see the progress of the reconstruction work, which is now finished. He then celebrated mass for the youth of the Oratory, which brings together the Christian youth of Gaza. About sixty children and teenagers attended. The day concluded with a visit to the Missionaries of Charity, who run two homes in Gaza for the disabled: one for young children and the other for teenagers and the elderly. This year, the Latin Patriarchate provided funds to allow for the expansion of the home for young children as well as the construction of an elevator to facilitate the moving of children and staff. Patriarch Pizzaballa also participated in the inauguration of the new annex of the facility. Then came a festive time with the traditional Christmas play, performed by the children of Gaza, and the lighting ceremony of the Christmas tree.

On the last day of the visit, Patriarch Pizzaballa celebrated Christmas Mass for the people of Gaza. “Because the Christians of Gaza cannot come to Bethlehem to celebrate like the rest of us, the Patriarch goes to Gaza the Sunday before the 24th and holds a Christmas mass for the community,” explains Mr. El-Yousef. This year, a baptism and a first communion were celebrated during the mass. “Where there is a baptism, there is life and love!” said Patriarch Pizzaballa while congratulating the parents Areej Bayouk et Saad Kattan. 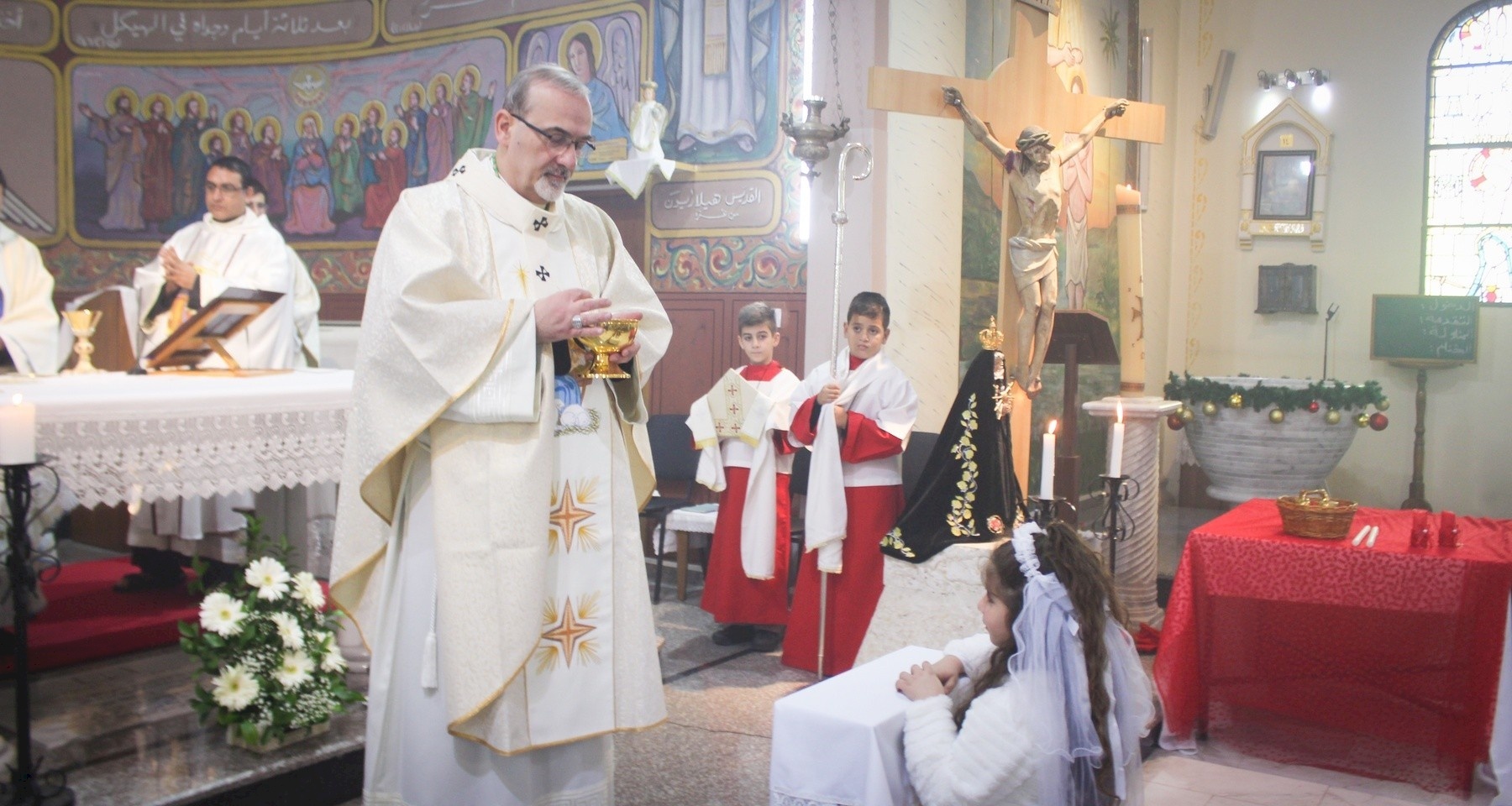 After the Mass, the parishioners were able to meet and discuss with the Patriarch before his departure from Gaza. Throughout the three days, His Beatitude noted the resilience of the people who keep on living despite all the challenges they must face every day.