Previous Next
Reflections from the Holy Land New Beginnings

The month of September always has a special meaning as it signals new beginnings, especially in the life of children and young adults. This week, we witnessed the return of millions of students l 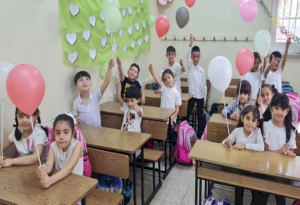 ocally to their schools for a new beginning and the joy witnessed on the faces of so many was just priceless. Many were able to enjoy summer camps for the first time in two years and the privileged ones had just returned from vacations, despite the chaotic nature of travel and airports. It is the first time in two years with no threat of an online education which marked a departure from the pandemic days, even though we are not entirely out of the woods. In both Jordan and Israel, no one is talking about the pandemic or about health issues, in stark contrast to Palestine where the president last week declared a state of emergency for 30 days as a result of an increase in the number of cases. However, it is clear that such a declaration was not matched with any clear regulations and thus it seems that again in Palestine, life goes on as usual.

Despite the fact that life is gradually returning to normal and unemployment in Israel returned to pre-pandemic levels of under 5%, it continues to be excessively high in Palestine and Jordan at well over 20% and standing at around 50% in Gaza. This has been exacerbated by the war in Ukraine which led to sharp increases in the prices of goods and services and an increase in inflation not witnessed in a very long time. To add salt to injury, the Euro and Dollar exchange rates to the strong Israeli currency meant that all the subsidies and donations received in those currencies are losing a minimum of 10% of their value. To be able to maintain balanced budgets under these circumstances appears to be almost impossible with the need to again look at rationalization plans.

Over the past few months, there has been many new beginnings at the Diocese level with n

ew Vicars assuming their leadership roles with Bishop Jamal Daibes in Jordan; Bishop Rafic Nahra in Israel; and Fr. Bruno Varriano in Cyprus. There is also new leadership in the Jordan schools with Fr. Firas Nasraween appointed as General Director and Ms. Samar Smeirat (former principal of the Fuheis School) as Executive Director. Together with the Palestine and Israel schools, some 19,000 students returned this week to attend 44 LPJ schools and relive the full experience of a parish school on campus. Many will return to rehabilitated halls, new desks, furniture and equipment, where many projects were implemented during the summer months.

The Pastoral life of the Diocese returned at full force during the last few months with an abundance of summer camps, youth activities, retreats, visits to holy sites, scout troupes activities, and Sunday school activities among many others. The AFAQ (Horizons) project, in collaboration with Bethlehem University pro 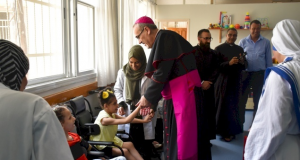 viding capacity building, employment or entrepreneurial training has been a great success surpassing expectation. All of the Humanitarian support programs progressed extremely well supporting hundreds who need a helping hand during their time of need whether in medical support, medicines, school support, or basic social assistance. The Gaza employment program, Iraqi refugees support and East Jerusalem fund continue to provide support to those most marginalized. Some of the new programs targeting youth and women are designed to empower people and lead them to become more self-sustainable. The good news is that 25 of those who benefitted from the Gaza employment program have secured permanent employment as a result of our intervention. The situation is less bright for Christian Iraqi refugees in Jordan where their estimated number is around 12,000 out of a total of 17,000. Despite the fact that many western countries reopened its doors to this group caught in the harsh reality of the Middle East, the number that remains stuck in Jordan continues to be very high.

If one evaluates the political horizon in the Middle East at large and the Holy Land in particular, it is difficult to find much room for hope. A four day war on Gaza in May devastated the community one more time; the killing of the Christian journalist Shireen Abu Akleh; continued tensions in Jerusalem over 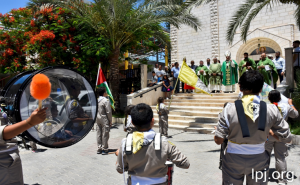 holy sites and access appears to be never ending; another election in Israel planned in two months, the fifth in four years and the instability that creates; the lack of a clear path to any reconciliation or peace on the Palestine -Israel front; not to mention continued refugee problems around us and a bankrupt Lebanon with all the tensions that creates internally and with its neighbors. However, as people of faith who have witnessed so many cycles of violence and disparity, we have been accustomed to accepting this as part of God’s plan, and to accept the good and the bad, but to concentrate on carving a way forward to continue to be of service to our Christian communities and society at large.

Thank you for continuing to keep us in your prayers and thoughts with our hope that as life continues to return to more normal patterns, we will see pilgrimages on the rise to the Holy Land and that you will all return to fill the streets and holy places with your presence and prayers.