Cardinal Zenari: Let’s not allow Syria to become a “beggar-nation”

Previous Next
Cardinal Zenari: Let’s not allow Syria to become a “beggar-nation”
Cardinal Mario Zenari, the Apostolic Nuncio in Syria, issues an urgent appeal not to forget the suffering Middle Eastern nation. His appeal rings out as Catholic-run hospitals continue to provide vital assistance to a population deprived of everything by the fallout of a “forgotten” conflict.

Syrians are experiencing a deep and protracted political and socio-economic crisis caused by an ongoing conflict that has resulted in suffering and the severe deterioration of living conditions.

The current world scenario, overshadowed by the war in Ukraine and its far-reaching effects coupled with the economic fallout of Covid-19, has pushed the Syrian situation into oblivion and deprived the people of development and future.

Speaking at a press briefing in Rome on Friday marking the five-year anniversary of the “Open Hospitals Project in Syria“ supported by Pope Francis, the Dicasteries for Promoting Integral Human Development and Oriental Churches, the Apostolic Nuncio to Syria, Cardinal Mario Zenari, decried the loss of hope experienced by Syrians and appealed to the world not to allow the nation to lose its place amongst nations and become what he called “a beggar-nation”:

Listen to an excerpt of the interview with Cardinal Zenari

Cardinal Zenari’s appeal was echoed by Giampaolo Silvestri, Secretary General of the ASVI Foundation, that runs the “Open Hospitals Project in Syria,” and by Franciscan Father Fadi Azar, who heads an ASVI medical dispensary in the city of Latakia, where thousands of people turn to as they struggle with a daily situation of deprivation on all fronts.

Recent UN estimates state that 13.5 million Syrians are in need of aid, and 11.5 million of them have no access to health care; 40% of these are children.

The Open Hospitals Project was born – as Cardinal Zenari – pointed out, from a desperate need for health care in a country where there is “no bread, no water, no energy, no houses, no young people, no hope…” and of course no public health care.

Following up on a request by the nuncio, the AVSI team decided to step in five years ago salvaging three existing Catholic-run hospitals that were not utilized to their full potential, or risked closure due to a lack of resources and dwindling staff.

Fr Azar, who highlighted the fact that all those in need are served regardless of their religious denomination, also spoke about how the Catholic-run hospitals and dispensaries have contributed enormously to destroying prejudice and building trust amongst the various communities that make up the population where Catholics constitute a mere 2%.

“Even the jihadists,” Fr Azar said, “during the ISIS’ reign of terror were respectful of the Church’s contribution to healthcare and education.”

All speakers at the briefing upheld the gratitude of the people for Pope Francis’ closeness and for the concrete help offered by the Holy See and by a number of faith-based organizations. But their voice was one, in pleading for salvation:

“In a situation where there is a scarcity of every basic need, where all Syrian children dream of leaving the country, where all young people have already left, even hope is all but dead,” they cried.

“Let’s give a voice to Syria,” Zenari reiterated, “Syria has no voice. It has lost everything, and hope is dying.”

“I could go home with millions in my pocket [for aid] and I would not be satisfied because what is needed is a way to give back hope to the nation.”

“Syria,” he insisted, “must be put back onto its feet, and find its place amongst nations: Let‘s not transform Syria into a beggar.” 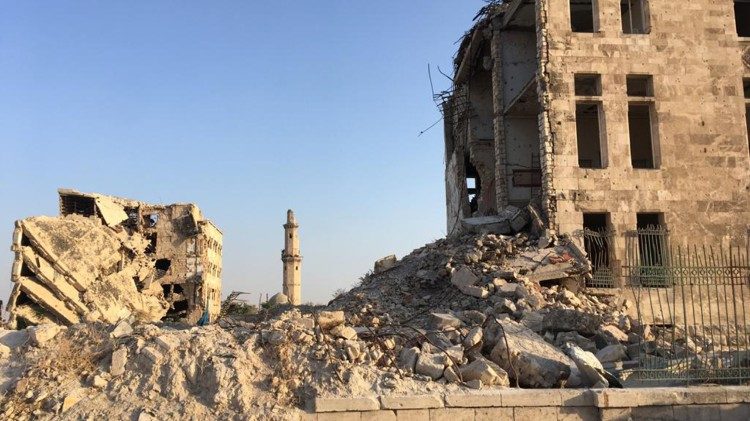