First Friendship Pact Between Christians and Muslims in Bethpage

Previous Next
First Friendship Pact Between Christians and Muslims in Bethpage

BETHPAGE – On Monday, April 22, Bishop William Shomali, Auxiliary Bishop of Jerusalem, went to the Mount of Olives in Bethpage and, together with the Grand Mufti of Jerusalem and other officials, signed a friendship pact between the Christian people of a housing complex by the Custody of the Holy Land and their Muslim neighbors. A first!

One hundred participants gathered at the “The Mount of Olives Club” in the district of Bethpage for an unusual signature ceremony. A friendship pact signed by Bishop Shomali, Auxiliary Bishop of Jerusalem, Mohammad Hussein, the Grand Mufti of Jerusalem, Adnan Husseini, Governor of Jerusalem and Fr. Ibrahim Faltas, treasurer of the Custody of the Holy Land. The signatories represent on one side, 63 families, the Christian residents of the Bethpage 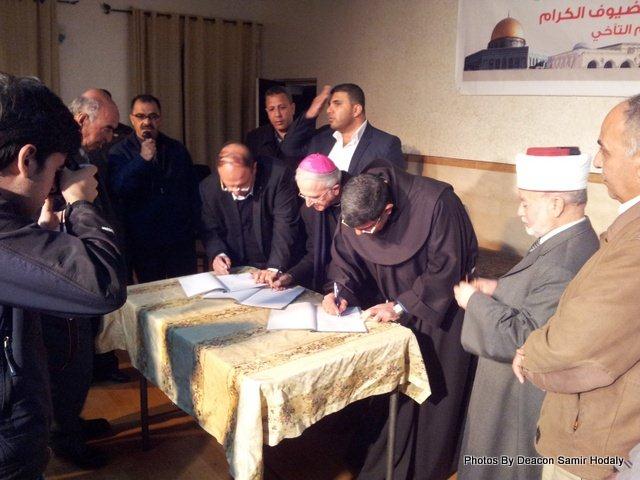 housing complex built by the Custody of the Holy Land and, on the other, the Muslim neighborhood. The pact has a twofold purpose: to prevent violence between neighbors, such as there was on two occasions in the past eight months, and to achieve good neighbor relations. The signing of the pact was proposed by a Coordinating Committee and, as such, is not just a highly symbolic gesture. The Committee members are responsible for ensuring the implementation of the agreement and intervening in disputes to find the best solution for all.

This great initiative was conceived by some Muslim leaders who intervened in previous clashes in the neighborhood. Each signatory spoke and advocated the importance of good neighborly relations, acceptance of others and emphasized the values ​​of friendship. The Grand Mufti, in a statement at the grand opening of relations with Christians, maintained that, according to him, as a Muslim, it is possible to sell land to Christians.