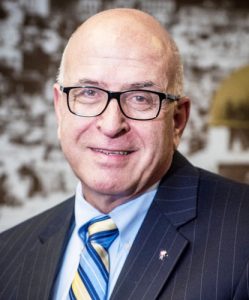 He came to the United States in 1976 to further pursue his education. From 1981 to 1986, he was Director of Operations for British/Saudi corporation Saudi Support Services, Ltd. He later moved to Jordan, where he worked for his own company, Reem Support Services. In 1989, he moved to Washington, D.C. where he worked for Marriott Corp. and founded, managed and owned several businesses (Image Printing & Publishing, Inc. and Vison Management & Consulting, Inc.)  Sir Rabie is co-founder and past national president of the Birzeit Society and co-founder, Vice President and Treasurer of the Institute for Health, Development and Research in Palestine. He is also a Knight Commander of the Equestrian Order of Holy Sepulchre and a 4th Degree Knight of Columbus, founder and co-chair of the Holy Land Outreach Committee of the Knights of Columbus, Maryland State Council.

In 1998, he founded the Holy Land Christian Ecumenical Foundation (HCEF), with other Americans and Palestinians concerned about the presence of the Arab and Palestinian Christians in the Holy Land. HCEF is charitable 501(c)(3) faith-based development organization with over 20 programs and offices in Bethlehem and the Washington, DC area. In 2007, The Arab American Anti-Discrimination Committee (ADC) selected Sir Rateb Rabie to receive the Faith and Tolerance Award. This award is given to individuals working with faith-based organizations to encourage cooperation and peacemaking in the Middle East.

Sir Rateb is committed to improving living conditions for Palestinians Christians in their homeland, preserving Palestine’s Christian heritage and strengthening the identity of Palestinian Christians in the worldwide diaspora. He pursues this mission under the motto “Let us work together to replace despair with hope, fear with human security and humiliation with dignity”. Sir Rateb advocates for peace and justice in Palestine.

Sir Rateb is married to his wife of 34 years Rocio, who he met in the United States. Together they have four grown daughters, whom they raised both in the Middle East and in America. They are also the proud grandparents of two young boys and are active longtime parishioners at the Shrine of the St. Jude in Rockville, Maryland. 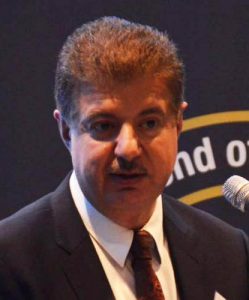 Mr. Kishek was born in Jerusalem. He came to the United States in 1979 and completed his BA in Economics at the University of California-Irvine. He earned an MBA from UCLA in Finance and Marketing, specializing in the futures and options markets. He joined the family jewelry business in Amman, Jordan in 1986, where he helped promote the jewelry export sector. With the cooperation of the Jordanian Ministry of Finance, he introduced new legislation permitting jewelry manufacturers to import gold bars duty-free for the purpose of manufacturing and re-exporting. The law is still in effect to this day. With his expertise in manufacturing, wholesaling and trading in gold bullion and gold jewelry, he established a new corporation in Costa Mesa, California in 1990. Kishek International, Inc., a fine jewelry wholesale corporation, carries a long legacy of the Kishek family jewelry business that spans almost a hundred years and four generations, preserving the ideals of quality, integrity, value and the hallmark of plumb gold.
Mr. Kishek promoted the concept of High Karat Jewelry for the first time in America, with emphasis on traditional jewelry designs from Palestinian and Middle Eastern heritages. He marketed the concept in major trade shows and industry journals, thus establishing an important presence in the U.S. jewelry marketplace.
Mr. Kishek is also an avid music lover. He produced with his wife, Rula, three albums of hymns and liturgical music celebrating Christmas, Easter and Our Lady the Virgin Mary. He currently resides in California with his wife and three children. 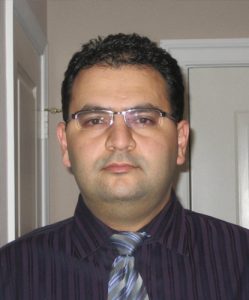 Dr. Hanania is a family dentist. In 2002, he graduated from the MISCH International Implant Institute (MISCH) and was awarded a fellowship in the International Congress of Oral Implantologists. Since graduation, Dr. Hanania has been in step with the latest advances in the dental field by completing over 200 continuing education credit hours in less than 4 years. In 2001, he graduated from University of Maryland with a Doctor of Dental Surgery and in 1997 he completed his BS, majoring in Biochemistry and Political Science. Dr. Hanania is a member in the American Dental Society and its local branch organizations: Virginia Dental Society, Northern Virginia Dental Society and the Woodbridge Dental Society. He has been involved in several community service projects. In 2000, he dedicated six weeks to crafting a free denture program for Native Indians in New Mexico. In 2007, he spent three weeks providing much-needed free dental services to patients in Jerusalem. When Dr. Hanania is not practicing dentistry, he dedicates his time to important causes. He is a board member of a human rights organization called Imagine-life and the founder of the Network of Arab-American Professionals (https://www.naaponline.org/). He is also a previous Chairman of Al-Awda and Arab-American Leadership Council in Virginia. As the founder and Chairman of the UASA, Dr. Hanania has enabled local and national schools to shed a positive light on Arab-American identity and take stronger initiatives to address issues pertinent to Arab-Americans in everyday life. 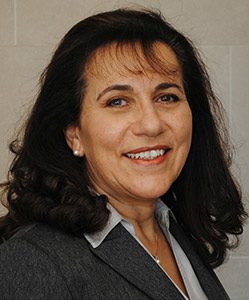 She  was born in Amman, Jordan to a Jordanian father & Palestinian mother. Immigrated to the US in 1976. Earned a degree in education from Ottawa University and MBA in International Business from Keller Graduate School of DeVry University.

Taught Arabic at the Graduate School of International Management in Glendale AZ, Math at Jr. high level in public and parochial schools. Served as an adjunct faculty at DeVry University and Glendale Community College, AZ. Currently working in the financial sector in AZ.

Has been a parishioner in Phoenix Diocese since 1977. Served on Parish Council as well as Finance Council for many years.

Passionate about the mission of HCEF and has been a volunteer since 2003. 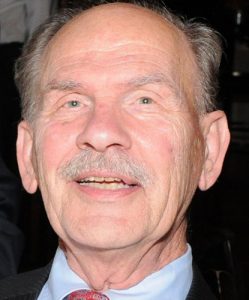 Frank was born in Baltimore on December 31, 1939. He grew up in Annapolis during the period of his childhood when he was living in this country. His father was in the Foreign Service so Frank and his family traveled and lived all over the world (Europe, Southeast Asia, North Africa, and Latin America). He spent his undergraduate years at Wheeling Jesuit University in West Virginia, and attended American University (D.C.) while working on his Master’s Degree in Latin American History. In 1965 Frank started his Professional career at the Library of Congress as the Library’s Research Specialist in the field of Print Media. In 1966 Frank and Judy Glaser were married in her home parish in Wheeling. They have two grown children: Suzanne and Jeffrey.

Frank retired from the Library in 1996 after 31 years of service. He worked as an information specialist at Barnes and Noble Bookstore for five years. By 2004 he became very much involved in volunteer work at his Parish, Shrine of St. Jude, Rockville, MD, where he is a lector, usher, and very active member of the Knights of Columbus, St. Joseph Manyanet Council 5567. Over the years he has volunteered for numerous programs directed not only by the Church but also for the Sodality, the Holy Name Society, and the St. Jude Parish School. One of his greatest concerns in life centers around the serious problem of the hunger of our elders who are homebound and unable to provide nutritional meals for themselves. For this he volunteers at Meals on Wheels of Wheaton/Kensington many times a month where he works to feed up to 80 people a day-Frank has been doing this work for the last nine years. Under the sponsorship of the Knights, he has also worked at Shepherd’s Table in Silver Spring, an organization that performs a wonderful Outreach Program for the feeding and clothing of the homeless at our community. None of this really covers all the projects Frank works on at HCEF, both at the Bethesda Headquarters and at various Parishes throughout Montgomery County. Frank is 75 and lives in Rockville, MD. 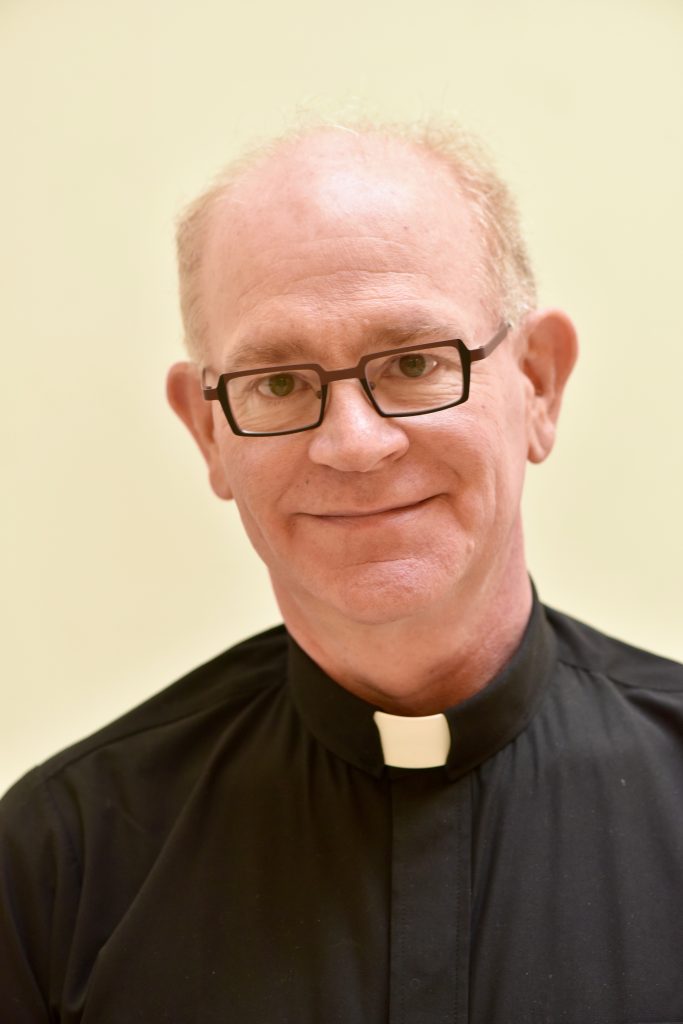 Fr. John Predmore, S.J. is the Director for Ignatian Ministries at Boston College High School in Massachusetts. He is responsible for the spiritual formation of the adult community in the school, including faculty and staff, parents, and alumni. The formation includes running various liturgical programs, teaching courses in scripture, providing pastoral support, leading retreats, and providing spiritual direction to laity and clergy.

Additionally, he pastorally serves several parishes for weekend liturgies, including offering masses in Spanish. He works with the Archdiocese of Boston with their Muslim-Catholic dialogue efforts. He provides weekend and eight-day retreats around New England.

Fr. Predmore teaches a class of prayer and spirituality at Creighton University in Omaha, Nebraska at the Creighton Spirituality Program each summer. He incorporates art and creativity in his classes and retreats. Last year, he taught spirituality through art in Stockholm, Sweden to Lutherans and Catholics as a way of engaging in interreligious dialogue. He believes it is a physical and sensory way of using art to talk to God in prayer.

He also is an avid photographer and often paints what he photographs. He makes note cards from his photographs and paintings. He learned to paint with oils five years ago when he was assigned overseas, and he works with watercolor as adeptly. Currently, he sings with Chorus North Shore as a second tenor, singing choral music was the masters in Western music. He sang Arabic music and performed in Arabic musicals with Dozan wa Awtar, the preeminent choral group in the Kingdom of Jordan, that blends western music with updated tunes from Arabic culture.

Fr. Predmore was the pastor of the English-speaking Roman Catholic community in Amman Jordan from 2013-2015, serving a diverse population of expatriates from each of the continents, including migrant workers from the Philippines and Southeast Asia.

Fr. Predmore earned his Licentiate in Sacred Theology at Boston College in spirituality and scripture (Pauline studies.) He earned his Masters of Divinity at Boston College as well. He taught theology and was the Mission and Identity Director at Cheverus High School in Portland, Maine. He studied philosophy at Georgetown University, and received a Certificate in Special Studies in Administration and Management at Harvard University’s Extension School. He has a Master’s Degree in Education and a Bachelor’s Degree from Worcester State University.