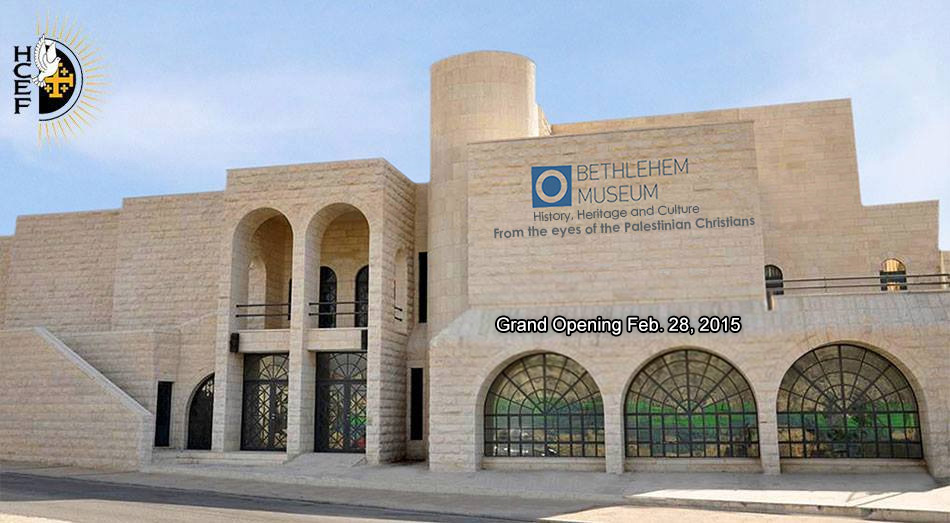 The Bethlehem Museum for Heritage and Culture is dedicated to fostering a deeper understanding and appreciation for the role Palestinian Christians play in preserving Palestine’s heritage, identity, and culture.

The Arab Women’s Union built the museum building since 1980, and since that time it has never been occupied. IN 2012 the Arab Women’s Union signed a long term strategic agreement with the Holy Land Christian Ecumenical Foundation (HCEF) to establish the Bethlehem Museum and make the women’s union dream a reality. The museum will be renovated to meet the demands of a modern museum and thriving community center that will raise the international interest in the proud history of the Palestinian of the Holy Land. This new building will not only enhance the Museum's programmatic offerings, but will ensure its future and sustainability.

Bethlehem, the city where Jesus was born, is the birthplace of Christianity. Its descendants are the first followers of Christ. Throughout the years, millions of people have come to Bethlehem, predominantly to visit the Church of the Nativity, as it is the site of Jesus’ birth. Three thousand year before the birth of Christ, Bethlehem was already known as a Canaanite land, Canaanite tribes, who lived in historic Palestine. Throughout its existence, Bethlehem has experienced and withstood numerous eras. Undaunted, the people continued to remain true to their cultural roots as native Palestinians of the Holy Land. Committed to the conservation and protection of the cultural heritage and goods, the displaying of these artifacts will ensure the legacy of Palestine is preserved.

The Bethlehem Museum will acquire, conserve, research, communicate and exhibit the tangible and intangible heritage of Palestine via the Bethlehem perspective for the purposes of raising awareness, education, and enjoyment. It will be a vibrant educational-cultural center attracting diverse audiences and providing them with a range of exhibits that encourage learning and stimulate thinking about the Palestinian identity and heritage. Engaging exhibition techniques that enable physical interaction, emotional investment, and mental stimulation will be displayed throughout the museum sections and stations, the Museum will be dedicated to the cultural heritage of the Palestinian civilization and will reflect the heritage and culture of Palestinians and Palestinian Christians, with a major emphasis on the people-to- people aspect.