Bishop Younan On: Pope Francis in the Holy Land

Previous Next
Bishop Younan On: Pope Francis in the Holy Land

ELCJHL: You were invited to visit Pope Francis in Jordan, Palestine, and Israel?

Bishop Younan: Yes, I was invited to the meeting with Pope Francis in Amman at the King’s Palace. All of the Heads of Churches, the Royal court and governmental ministers, attended this meeting, as well as Pope Francis’s delegation. King Abdullah II delivered a very important speech in which he spoke on two major issues: the role of Jordan in Muslim-Christian relations as highlighted in the Amman Message and the Common Word and the need for a solution to the Palestinian-Israeli conflict. In response, the Pope emphasized the importance of relationships with Muslims and the good work that Jordan has been doing in interfaith work, as well as emphasizing the Christian community that has been quietly witnessing in the Middle East for 2,000 years. The Pope asked to greet this community.

On Sunday, Palestinian President Mahmoud Abbas gave a clear message on the Palestinian issue that it is time to solve it and that there are obstacles – the settlements, the Judiazation of Jerusalem, but we are still committed to non-violent struggle and for dialogue. Pope Francis’s message to Palestine was that it must have internationally-recognized borders with two states that can live side-by-side in peace, equity, and reconciliation.

I attended the historical meeting where Pope Francis and the Ecumenical Patriarch Bartholomew. The spirit between both men was very good and the Ecumenical Patriarch said clearly that the empty tomb teaches us to build bridges and to seek unity and reconciliation. The Pope answered the Patriarch that it was time for reconciliation and that the Christians in the Middle East are of great importance in building this reconciliation. I hope that this meeting will not only boost the Orthodox-Catholic relationship, but will also help the ecumenical relationship with all churches, including the Lutherans.

In Pope Francis’s speech at Ben Gurion Airport for his official arrival into Tel Aviv, Pope Francis stated the need for a lasting peace when he said, “Building peace is difficult, but living without peace is a constant torment.”

ELCJHL: What were your feelings about Pope Francis’s meeting with the Palestinian Authority and the Mass held in Manger Square?

Bishop Younan: The meeting with President Mahmoud Abbas was very cordial – he explained that he is serious about peace based on justice and that he is still committed to dialogue. I believe that the spirit of the meeting was very positive and I believe the Pope understood the complexity of the situation, especially when speaking with Palestinian families during a lunchtime visit in Bethlehem. For example, there was a child who, because of a dispute about where her parents are from and where they are living, she cannot be reunited with her family. She cannot receive papers from the Palestinian Authority and the Israeli government will not issue them because they cannot prove that the center of their lives is in Jerusalem. Reunification permits – necessary for when a spouse from the West Bank marries a Jerusalemite – are notoriously hard to get. I was thankful when I heard that Pope Francis raised this issue with Israeli Prime Minister Benjamin Netanyahu. It is important to me that the Pope saw the issues that the Palestinian people are dealing with. I told the Pope that I am a Palestinian Refugee and he was surprised to hear that a Bishop could also be a refugee.

“I told the Pope that I am a Palestinian Refugee and he was surprised to hear that a Bishop could also be a refugee.” 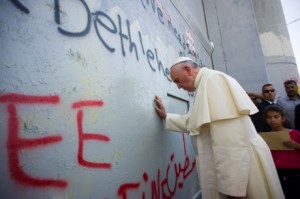 Pope Francis said very clearly that the Christians who have been witnessing in the Middle East for over 2,000 years in sometimes difficult situations are important, they play integral roles in their societies, and that their role in this part of the world should not be overlooked. I believe this gives even more importance to supporting Arab Christians who are witnessing in the Middle East.

Pope Francis touches the wall that divides Israel from the West Bank, on his way to celebrate a mass in Manger Square next to the Church of the Nativity, believed by many to be the birthplace of Jesus Christ, in the West Bank town of Bethlehem, Sunday, May 25, 2014. (AP Photo/Osservatore Romano, ho)

ELCJHL: You met the Pope both in Jerusalem and Bethlehem. What were the main differences between those meetings?

Bishop Younan: In Bethlehem, it was a popular meeting – everyone was there, helping solidify Muslim-Christian relations. Here, in Jerusalem, it was strictly an official meeting. The Old City was closed by the Israeli police and streets were cut off to those wishing to see Pope Francis. I don’t underestimate the importance of meeting with officials. In the Holy Sepulcher, the meeting with the Ecumenical Patriarch has given a boost to ecumenism in Jerusalem. In Jordan, King Abdullah II gave a speech on Muslim-Christian relationships and the importance of Jordan’s role in facilitating those relationships. At the Haram esh-Shariff, this spirit of mutual trust was on full display in the meeting between Pope Francis and the Grand Mufti of Jerusalem. It has given a boost to Muslim-Christian relations and I hope this meeting will help to overcome Islamaphobia around the world. At the same time, I hope that the meeting between Pope Francis and the two chief Rabbis of Israel on the Jewish side, will help in the fight against anti-Semitism as well as give a boost to Christian-Jewish relations. These visits are very important to us, but, of course, the expectation of the people of Jerusalem is different. People want the Pope to not only visit officials, but to visit local people. In Jerusalem, they have taken the official side and not the popular side. I hope that, next time, the popular side will be balanced with the official side.