Jaffa-Tel Aviv: “The Presence of Christian Migrants Is an Asset for the Local Church”

Previous Next
Jaffa-Tel Aviv: “The Presence of Christian Migrants Is an Asset for the Local Church”

TEL AVIV-JAFFA – On Saturday 13 and Sunday, September 14, 2014, Patriarch Fouad Twal made ​​a pastoral visit to the Catholic community in Jaffa. He came to meet a suffering Catholic Arab community, but also a vibrant and large community of Catholic immigrants. This visit is part of the pastoral visitations of the Patriarch to each parish in the diocese, which began two years ago and continues.

The Patriarch met a suffering and numerically small Arab Christian community that is struggling to find or keep its identity at the heart of the bustling major Israeli city. “Many children do not speak Arabic and most young people do not go to Mass,” lamented His Beatitude.

Nevertheless, he warmly welcomed the presence of a group of young Arab Christians who came to the celebration.

The Patriarch was very touched by the Indian and Filipino community: “They are very loyal to their faith and tradition. There are those who live in fear of being deported from the country, but they have found a refuge, a shelter and a place to get together in the Church.” Several times a week, this migrant community, is found in the church or in the center of Our Lady Woman of Valor in Tel Aviv, for fraternal meeting times around a typical meal or time of prayer and Eucharistic adoration. “Some are found in prayer at ten o’clock in the evening having started for work that day at two in the morning. Their presence is a treasure for the Church, a testament to the local Christians often too busy with politics,” stressed Patriarch.

He also met with the civil authorities of the Jaffa Municipality and Police, who affirmed their commitment to do everything possible to ensure that all can live in peace. They further discussed the coexistence of the different communities.

After some traditional Philippine and African dances, various groups of diplomats from Africa and Latin America came to greet the Patriarch, who, in turn, thanked them for their support and the their country’s stand during the war in Gaza.

On Sunday, the Patriarch presided at Mass in the Latin parish of Jaffa, St. Anthony of Padua, which completed his pastoral visit. Concelebrating the Mass at his side was his Vicar in Israel Bishop Marcuzzo and the parish pastor, Father Zaher Aboud OFM. Heads of the Melkite Greek and Orthodox communities came to meet the Patriarch and they also attended the mass.

During his homily, the Patriarch stressed the mystery of the cross is a mystery of joy, intimately linked to the hope of the Resurrection. He pondered the characteristics of the first Christian community in Jerusalem. He urged the faithful to rediscover the values ​​that have marked the first Christian community who persevered in prayer, the teaching of the apostles, brotherly love and the breaking of bread. He recalled as well the importance of “Christian fellowship”, unity among different communities living sometimes isolated from each other when they are called to discover and enrich each other: “We are a single Church, the Church of God.”

During the Mass, a group of women members of the Legion of Mary, whose main apostolate is prayer and home visitation, were able to renew their promises.

At the end of the celebration, a delightful buffet awaited the guests and the Patriarch took the time to greet everyone.

Before leaving Sunday night for Jerusalem, Patriarch was able to meet some members of the movement of the Legion of Mary and their two Jaffa groups: Help of Christians and Cedar of Lebanon. He then met with the pastors of various parishes in the city of Jaffa – Maronite, Melkite, Armenian and Greek Orthodox – and with the Christian Brothers who staff a school in Jaffa. 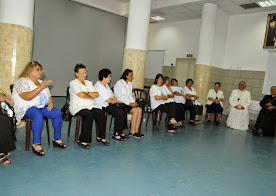 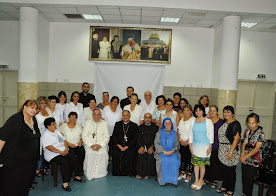 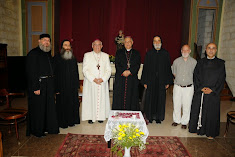 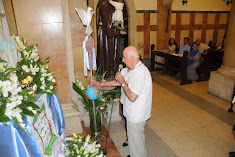 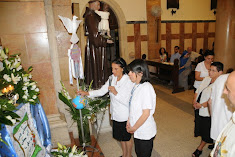 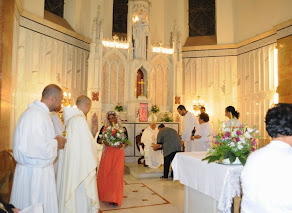