Italian Bishops in Gaza: “In This Desert Not All Flowers Were Pulled Out”

Previous Next
Italian Bishops in Gaza: “In This Desert Not All Flowers Were Pulled Out”

GAZA – The Presidency of the Italian Episcopal Conference (IEC) went on a visit to Gaza Strip, accompanied by Latin Patriarch Fouad Twal. Two days of intensive meetings during which Italian Bishops were able to get a first-hand view of the disastrous consequences of the war, and also signs of hope and revival among the people of  Gaza.

It is not a common practice that  Bishops leave dioceses and offices and go on such an important trip, in order to meet a Christian community forgotten by  media but severely affected by the conflict.

Cardinal Angelo Bagnasco, chairman of the IEC and  three deputy chairmen, Cardinal Gualtiero Bassetti, Archbishop of Perusia-Citta della Pieve ; Mgr Nosiglia, Archbishop of Turin ; Mgr Angelo Spinillo, Bishop of Aversa ; together with  Mgr Nunzio Galantino, IEC Secretary General, had heartily  accepted the invitation of the Patriarch of Jerusalem. They visited the people of Gaza over two days, in order to show their friendship, their hope and their peace.

After arriving in Tel Aviv during evening hours, the Bishops joined the rest of the delegation : the Patriarch of Jerusalem Fouad Twal, the Patriarchate’s General Administrator, Fr Imad Twal, Fr Mario Cornioli, and some pressmen.

The Parish Priest Fr Jorge Hernandez and his team led the group to show them neighbourhoods hit during summer 2014 war, using jeeps put at their disposal by UN-PD. The heavy rainfall of the last days made the scene yet more impressive. Tens of destroyed buildings, devastated roads, burnt out rumbles scattered everywhere. Those who survived set up tents, built shelters to live underneath and many children on the way to school have greeted the delegation.

The second step was a visit to the Jordanian military hospital which houses professionals and experts enjoying King of Jordan’s support. Many patients are treated here, receiving help from exclusively Jordanian staff. The Patriarch of Jerusalem highly commended the work being undertaken and for the welcome granted to members of the delegation.

Students of the Holy Family School, about one thousand, of whom 10 % are Christians, have warmly welcomed the delegation. Bishops entered into the classrooms to talk to them, to ask questions. The new recreational hall, dedicated to St John Paul II, was made possible through the support of IEC.  During the war, over 1000 persons took shelter inside this school, seeking protection, water, food, thanks to efforts made by Jerusalem Caritas members.

In the afternoon Bishop Alexis, who in charge of the orthodox Christian community (about 1500 faithful), warmly welcomed the Italian bishops. He spoke about the difficult weeks of airstrikes, when hundreds of persons took shelter inside these spaces, while others found  protection inside the school.

During the visit to St Porphyre’s Church, the most ancient church in Gaza Strip, the delegation was allowed to make a short prayer at the altar. The Latin Patriarch of Jerusalem spoke about the first Christian community which was not spared during persecution, but which remained  throbbing in faith and in charity.

Around mid-afternoon, UN jeeps came over to the Latin Parish, welcomed by the Scouts drummer boys. A fully packed church delightfully welcomed Patriarch Fouad Twal who had not visited Gaza since a long time. A special celebration for Italian prelates used to worship inside wide churches and large crowds.

During the homily, the Patriarch gave the floor to Cardinal Bagnasco.  He gave  a short description of the visit : “We have seen a people that is  overwhelmed  by sufferings and destruction, but in this desert not all flowers were pulled out.  Through the eyes  of these people, and of children more particularly, we have noticed that life keeps opening up and they are decided to go forward”.

After the Mass, sitting in the school playground, Bishops heard testimonials from  families. The chairman of IEC called on Christians to bear witness : “You have the duty to keep hope alive  among  all these people who need to rebuild  their conscience in order to heal up the wounds of the last years and to live up again. You Christians are  the ones!”

The programme included a visit to the home of the Sisters of Mother Theresa. Bishops, profoundly touched and moved, hugged the children.  Many of them are just months old !  Most of them bear signs of sickness and their families wretchedness. More and more requests are recorded every day :  “two or three families knock at the door every morning,  asking us to foster their children. We cannot absorb them all.  The situation of poor people is not that different from Indian slums or in suburbs of major cities of the third world” said  smilingly Sister Delphine.

Before getting back to the hotel for lunch, the delegation made a last stop at the home of the Rosary Sisters, who also run a school.

On the following morning,  after having crossed  the borders, Bishops stopped at Sderot, a town that is close to Gaza, target of repeated rocket  launching during the war. There,  they visited  halls well  protected in case of attack, and the depot with debris of  rockets brought down during the last years.  Even across the borders there are families and children who suffer, experiensing effects of war traumas 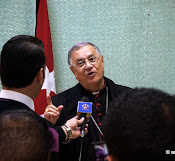 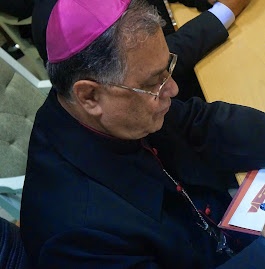 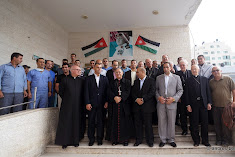 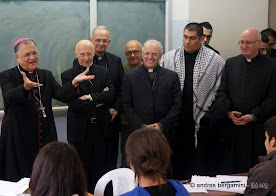 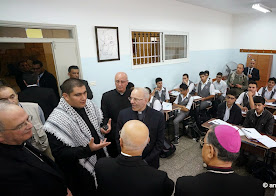 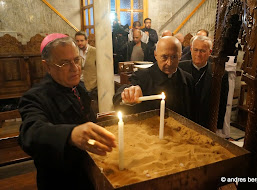 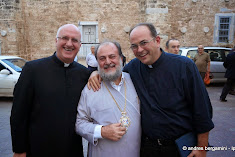 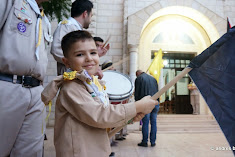 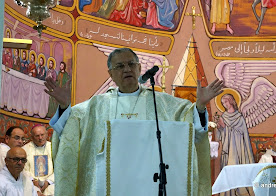 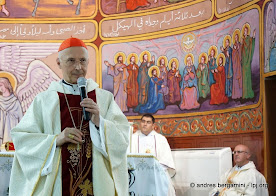 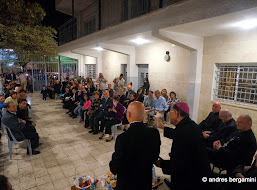 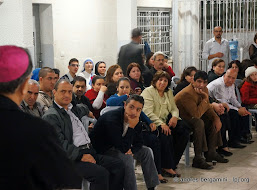